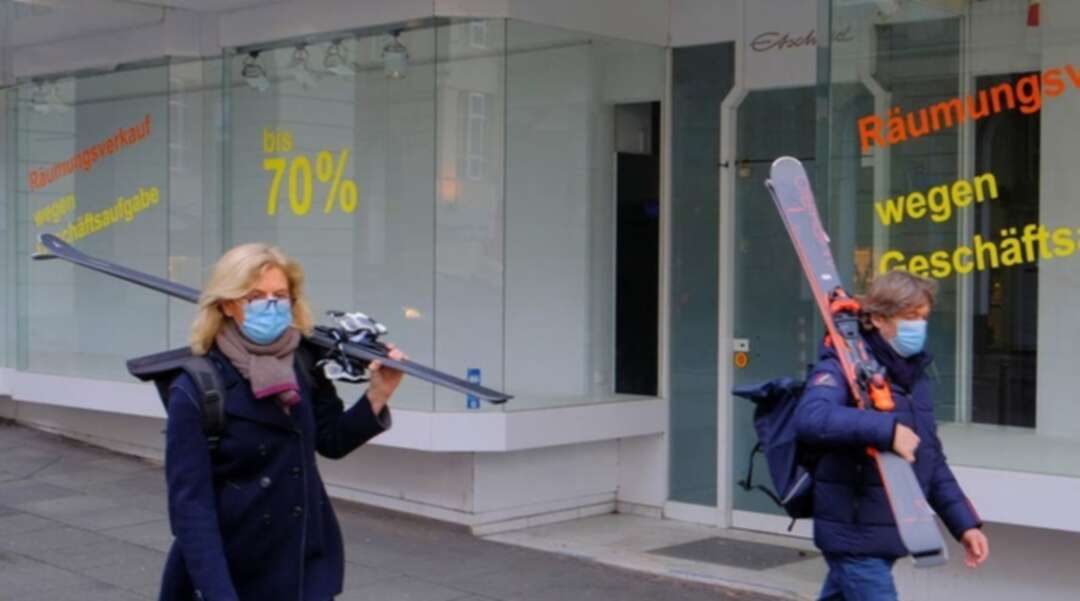 A couple walks past an abandoned store after buying new skis for the next season with a huge discount during winter sales, as the coronavirus disease (COVID-19) pandemic lockdown continues, in Bonn, Germany, March 16, 2021. (File photo: Reuters)

The southwestern state of Saarland will become the first in Germany to lift its coronavirus shutdown from April 6, with leisure, sports and entertainment facilities to reopen, state premier Tobias Hans said Thursday.

Cinemas, theaters, concert halls, outdoor dining and gyms will be reopened and gatherings of up to 10 people will be allowed in public after Easter, Hans told a press conference.

People who visit them will have to abide by hygiene rules and present a negative antigen rapid test, he said.

Shops reopened from early March in the region bordering France and Luxembourg, where infection rates have been among the lowest in Germany.

With virus rates elsewhere in the country soaring, Chancellor Angela Merkel and the leaders of Germany’s 16 states had agreed at tense talks on Monday to prolong existing measures until April 18.

But under Germany’s federal system, regional states have significant decision-making powers and have often strayed from the government line in the past.

Merkel on Wednesday admitted the failed plan was “my mistake” and asked the public to forgive her, in a rare climbdown amid massive criticism of the government’s pandemic response.

Germany was widely praised for its handling of the first wave of the pandemic, but has struggled to contain new infections since they began spiraling out of control in a second wave late last year.

“The situation is serious. Case numbers are rising exponentially and intensive care beds are filling up again,” Merkel said after announcing the tougher measures on Monday.

The British variant has become the dominant strain circulating in Germany, she said, noting: “We are in a new pandemic.”

Numbers have since continued to rise, with 22,657 new cases reported in 24 hours on Thursday by the Robert Koch Institute (RKI) health agency and an incidence rate of 113.3 per 100,000 people over seven days.