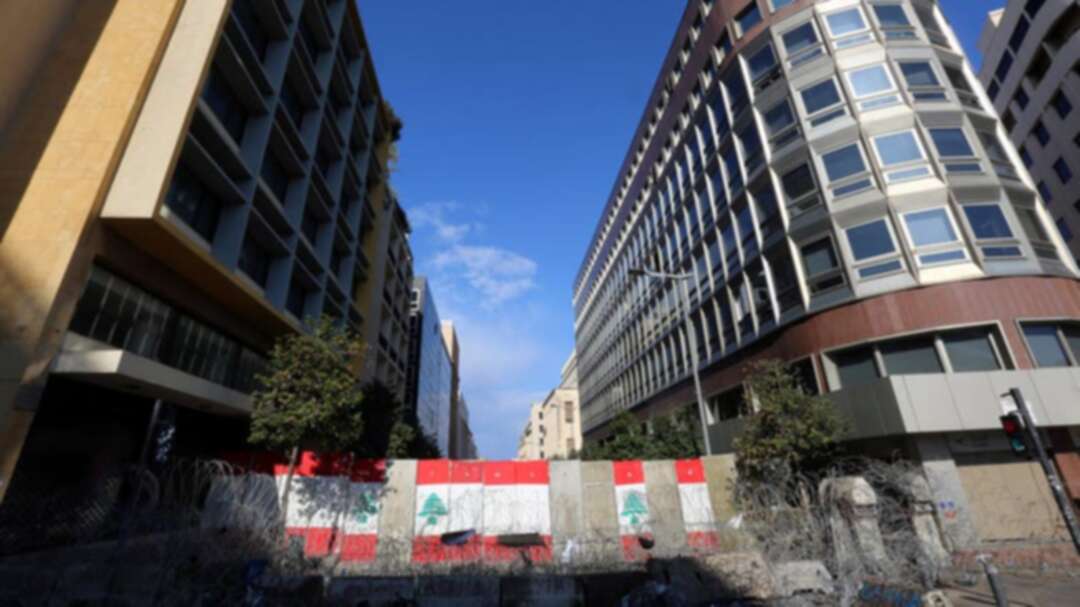 A view shows concrete barriers erected by authorities to block a street hosting banks and financial institutions, near the government palace in Beirut, Lebanon, January 24, 2020. (Reuters)

Lebanon’s state prosecutor suspended an order on Thursday to freeze the assets of 20 local banks, warning it would plunge the country and its financial sector into chaos, according to a copy of the decision seen by Reuters.

Local lenders are at the heart of a financial crisis crippling Lebanon as the clock runs down on its looming debt maturities, including a $1.2 billion Eurobond due on March 9.

The government will meet on Saturday to decide after Parliament Speaker Nabih Berri said a majority of MPs oppose paying, even if that leads to default. The comments compounded doubts over whether the heavily indebted state will meet the repayment.

The banks, which for years funneled deposits to the state, hold the bulk of the sovereign debt and have been in discord with political powers over the March repayment.

Financial prosecutor Ali Ibrahim questioned bank chairmen this week over transfers abroad and recent sales of Eurobonds to foreign funds. Ibrahim issued an order on Thursday to freeze the assets of 20 Lebanese banks, their top bosses and boards as part of a probe, state media, and judicial sources.

“Such a move would send the country, as well as its monetary, financial and economic sectors into chaos,” said a memo by State Prosecutor Ghassan Oueidat, who suspended the assets freeze.

The memo said international financial authorities had intended to halt dealings with Lebanese banks, without elaborating.

A judicial source said the freeze was directed at some of Lebanon’s biggest banks, including Blom Bank, Bank Audi, Byblos Bank, Bank of Beirut and SGBL.

The Association of Banks in Lebanon, which represents the nation’s lenders, could not be reached for immediate comment.

Financial strains came to a head last year as capital inflows slowed and protests erupted against a political elite that has dominated Lebanon since the 1975-1990 civil war and steered it into crisis.

The crisis is rooted in decades of waste and corruption which landed the country with one of the world’s biggest public debt burdens.

Berri, one of the country’s most influential leaders, blamed banks on Wednesday for diluting the local holding by selling the Eurobonds to foreign investors. Critics say this has weakened Lebanon’s position in talks with foreign bondholders.

Some politicians have turned their criticism to the banking sector as public anger boiled over at the banks, which have severely curbed people’s access to their savings and blocked transfers abroad.

The head of the banking association, Salim Sfeir, has said the restrictions aim to keep Lebanon’s wealth in the country.

Sfeir said on Wednesday the sector was being targeted with rumors and banks had suffered losses to secure liquidity.

Earlier this year, the central bank asked banks to review transfers of funds abroad by politicians and government employees between October and December.

The government separately approved a draft law on Thursday that seeks to lift banking secrecy. The information minister said the law, which will go to parliament, would apply to ministers, MPs and a range of public officials.