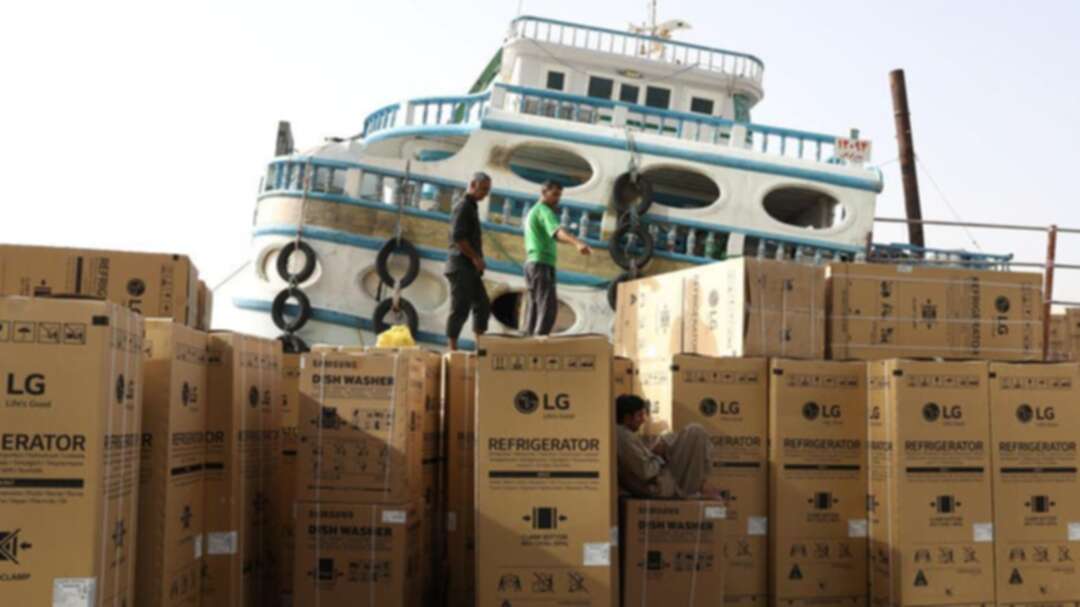 Workers organize goods to be loaded onto a dhow bound for Iran along the creek in old Dubai, United Arab Emirates, March 2, 2020. (Reuters)

Iranian merchants plying the busy Strait of Hormuz between Dubai and Iran fear their next trip home will be a one-way trip after the United Arab Emirates banned ferry services to prevent the spread of coronavirus.

“Business is finished,” said Iranian trader Morad as he stacked goods on a small wooden dhow this week destined for the Iranian port of Bandar Abbas some 230 km (140 miles) away.

Iran, which has emerged as an epicenter for the disease that originated in China, is already grappling with economic hardship as U.S. sanctions curb oil and gas exports crucial for government revenues.

Now its non-oil trade, which the International Monetary Fund had estimated would be about $40 billion in 2020 - or nearly 10% of its economy - is under threat just weeks after mass protests against the government over economic hardships were crushed.

Several countries in the region have suspended flights to Iran and neighboring Iraq has closed its land border, worsening the Islamic Republic’s economic isolation since Washington reimposed sanctions in 2018.

Indefinite restrictions on trade and tourism, particularly with Iran’s main trading partners China and Iraq, could lead to a deeper economic contraction.

The dhows that line Dubai Creek are piled precariously high with fridges, televisions, rice, and sugar destined for Iran - and usually return laden with goods such as spices and plastics.

“I’ll go there, and I don’t know when I will be back, one month, three months?” Morad said before setting sail for Iran. “I have a small business there, maybe I’ll do some fishing.”

The IMF, which estimates the Iranian economy shrank 9.5% last year, had expected it to stabilize this year - before the coronavirus crisis escalated.

The number of virus deaths in Iran hit 107 on March 5, putting it on a par with Italy as the country with the highest death toll outside China. President Hassan Rouhani said on Wednesday the virus had affected almost all of Iran’s provinces.

Garbis Iranian, chief economist for the Middle East and North Africa at the Institute of International Finance (IIF), told Reuters he had cut his forecast for Iran’s gross domestic product because of the outbreak.

Iranian had been expecting the Iranian economy to contract 2% in 2020 but he’s now forecasting it will shrink 3.1%.

“Let’s say, hypothetically, I managed to import furniture, who is going to buy it inside Iran?,” said Farhad, a 53-year-old businessman from Tehran who buys furniture from China. “All the shops are closed. All sectors face the same problem.”

Iranian said continued curbs on trade and tourism could see the inflation rate spike above 50% and unemployment rise over 20% of the labor force. The unemployment rate for Iranians aged 18-35 is 17.9%, according to official figures published by the Statistical Center of Iran in December.

The demonstrations, which called for the overthrow of the government and Supreme Leader Ali Khamenei, were met with a crackdown that killed hundreds and put thousands in jail.

Many Iranians, already angry about economic hardship and concerned about the fallout from Tehran’s nuclear standoff with Washington, say they are worried the country’s clerical rulers have not got a firm grip on the coronavirus illness.

Some critics accused the authorities of initially concealing the outbreak to secure a high participation in state-organized rallies. Others suggested it was to ensure a high turnout on February 21 parliamentary polls. A government spokesman rejected the accusations, saying the outbreak should not be politicized.

Kuwait has also closed its Doha Port, mainly used for barges and small ships, to avoid interaction with

Iranian businesses small and large across the country are starting to struggle as the disease spreads.

“I told my workers not to come to work as I was worried they might get infected,” said Abouzar, who owns a textile factory in the holy city of Qom, where the virus first struck in Iran.

“If the situation continues, I’ll have to close the factory. I will go bankrupt because I have to pay back my loans. How? I don’t know,” he said.

The head of hotels and hotel apartments association was quoted by Iranian media as saying that 98% of hotels have closed because of the outbreak. Qom alone attracts millions of Shia Muslim pilgrims from around the world.

Iran’s central bank has said individuals and businesses affected by the outbreak, such as hotels, restaurants and transportation companies, should not be fined for delays in loan repayments until late May.

“In the past week, people have been withdrawing their savings from our branch. This is going to be in issue if the virus crisis continues,” said a bank employee in the northern city of Sari, who asked not to be named.

“I also emptied my account. Everyone is worried about a complete lockdown.”