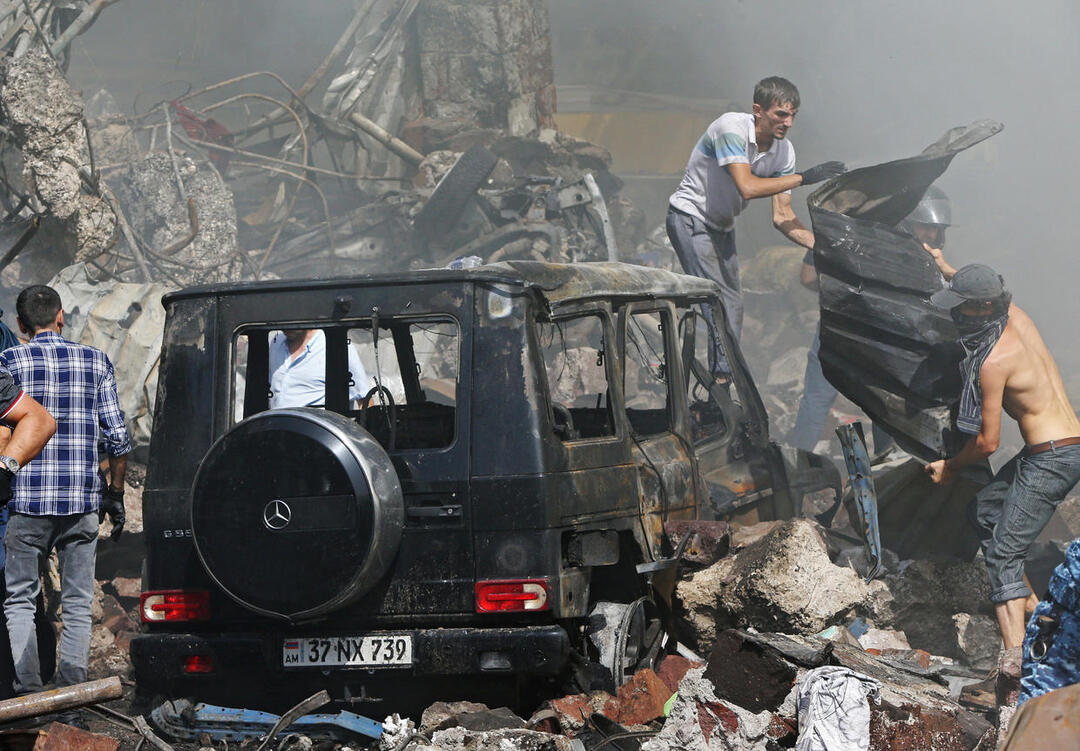 People clear the debris after blasts ripped through a fireworks warehouse near a shopping mall in Yerevan, Armenia, on Aug. 14, 2022. Vahram Baghdasaryan/Photolure via REUTERS

A popular market in the Armenian capital, Yerevan, was devastated by a massive explosion at a fireworks storage area on Sunday (August 14), the Euronews reported, citing media agencies.

According to the country's Ministry of Emergency Situations, the blast at Surmalu market, happening early afternoon, killed at least five people, injured 60 others and sparked a huge fire that raged into the night.

19 more people are unaccounted for as of Monday morning (August 15), with relatives believing they could still be trapped in the wreckage of a building destroyed by the blast.

The cause of the explosion remains unknown.

Rescue workers and volunteers searched amid still-exploding fireworks, pulling dead and injured people from under slabs of concrete and twisted metal throughout Sunday. The victims are four women and a man.

A strong explosion at a fireworks storage area tore through a popular market in Armenia's capital, setting off a large fire and killing at least one person. https://t.co/Xg7vI7MROw pic.twitter.com/XFWXbxuDMX

Armenia's General Prosecutor's Office announced overnight that it was opening an investigation into possible violations of "fire regulations" or rules around storing flammable products.

Eyewitnesses reported that the explosion occurred in an area where fireworks were stored, yet the authorities have not confirmed this.

Armenian President resigns over lack of constitutional power for him

"There is no information at the moment," Alen Simonyan, Chairman of the National Assembly of Armenia told AP reporters on Sunday afternoon.

"There is no conclusion [on what caused the blast] yet, but most likely a violation of fire discipline or something like that."

Footage circulating on social media showed a thick plume of black smoke rising high into the sky, with the sound of small detonations crackling in quick succession in the background.

Armenia accepts cease-fire after soldiers killed in clashes with Azerbaijan

Rescuers used diggers to clear large piles of steaming rubble from the demolished building in an attempt to find survivors.

Many volunteers also got involved, shifting piles of heavy concrete and twisted metal by hand.

According to Armenia's Ministry of Emergency Situations, some 200 firefighters and rescue workers were deployed to the scene, as well as several trucks and construction machinery.

Lebanon is the angriest country in the world, followed by Turkey and Armenia

The market, two kilometres south of the city centre, is popular with locals for its low prices and variety of goods.

The embassy of Russia, a neighbouring country of Armenia, indicated on Sunday evening it was seeking to establish whether Russians were among the victims.

It said in a statement: "We express our sincere condolences to the families and loved ones of those who died in the explosion.”