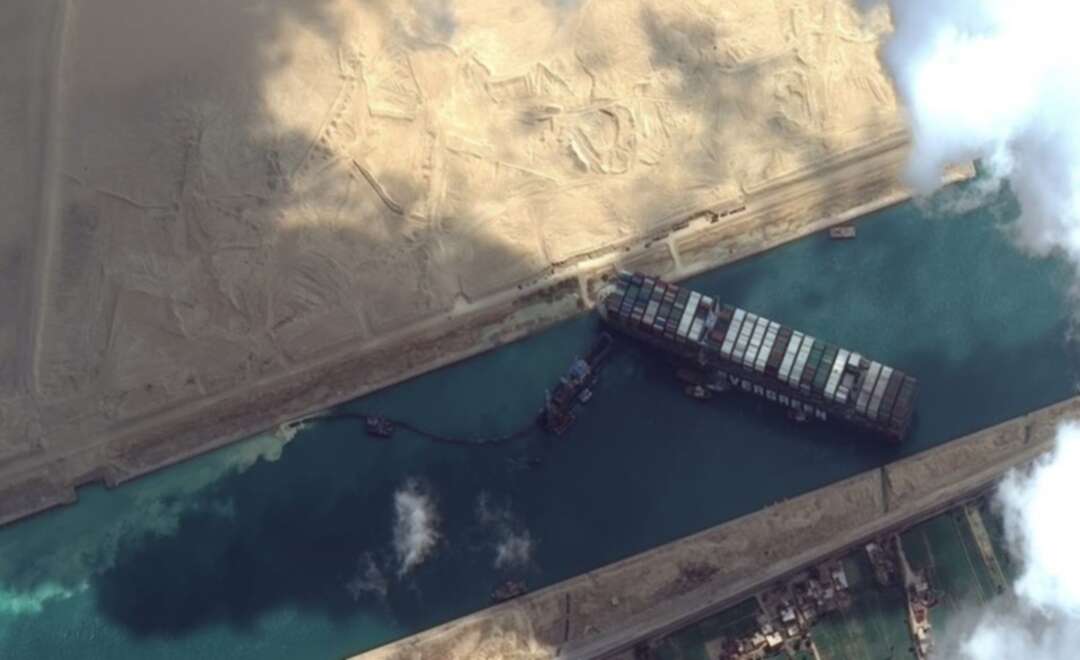 Ever Given container ship is pictured in Suez Canal in this Maxar Technologies satellite image taken on March 26, 2021. (Reuters)

A giant container ship remained stuck sideways in Egypt’s Suez Canal for a fifth day Saturday, as authorities prepared to make new attempts to free the vessel and reopen a crucial east-west waterway for global shipping.

The Ever Given, a Panama-flagged ship that carries cargo between Asia and Europe, ran aground Tuesday in the narrow canal that runs between Africa and the Sinai Peninsula.

The massive vessel got stuck in a single-lane stretch of the canal, about six kilometers (3.7 miles) north of the southern entrance, near the city of Suez.

Bernhard Schulte Shipmanagement, the technical manager of the Ever Given, said an attempt Friday to free it failed. Plans were in the works to pump water from interior spaces of the vessel, and two more tugs should arrive by Sunday to join others already trying to move the massive ship, it said.

An official at the Suez Canal Authority said they were planning to make at least two attempts Saturday to free the vessel when the high tide goes down. He said the timing depends on the tide.

The official spoke on condition of anonymity because he was not authorized to brief journalists.

At least 10 tugboats were deployed to assist in refloating the vessel, according to Japanese firm Shoei Kisen KK, which owns the container ship.

Shoei Kisen President Yukito Higaki told a news conference at company headquarters in Imabari in western Japan that 10 tugboats were deployed and workers were dredging the banks and sea floor near the vessel’s bow to try to get it afloat again as the high tide starts to go out.

Shoei Kisen said in a statement Saturday the company was considering removing containers to lighten the vessel if refloating efforts fail, but that would be a difficult operation.

The White House said it has offered to help Egypt reopen the canal. “We have equipment and capacity that most countries don’t have and we’re seeing what we can do and what help we can be,” President Joe Biden told reporters Friday.

A maritime traffic jam grew to around 280 vessels Saturday outside the Suez Canal, according to canal service provider Leth Agencies.

Some vessels began changing course and dozens of ships were still en route to the waterway, according to the data firm Refinitiv.

A prolonged closure of the crucial waterway would cause delays in the global shipment chain. About 10 percent of world trade flows through the canal, which is particularly crucial for transporting oil. The closure could affect oil and gas shipments to Europe from the Middle East.

Apparently anticipating long delays, the owners of the stuck vessel diverted a sister ship, the Ever Greet, on a course around Africa instead, according to satellite data.

Others also are being diverted. The liquid natural gas carrier Pan Americas changed course in the mid-Atlantic, now aiming south to go around the southern tip of Africa, according to satellite data from MarineTraffic.com.