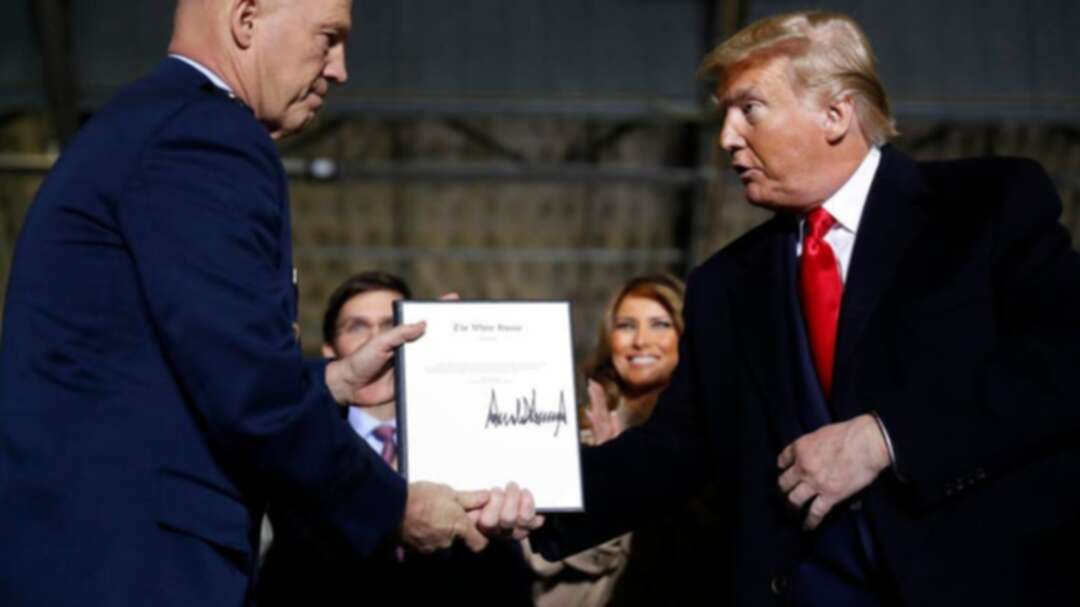 Trump shakes hands with Gen. Jay Raymond, after signing the letter of his appointment as the chief of space operations for US Space Command. (File photo AP)

US President Donald Trump on Friday celebrated the launch of Space Force, the first new military service in more than 70 years.

In signing the 2020 National Defense Authorization Act that includes Space Force, Trump claimed a victory for one of his top national security priorities just two days after being impeached by the House.

It is part of a $1.4 trillion government spending package - including the Pentagon’s budget - that provides a steady stream of financing for Trump’s US-Mexico border fence and reverses unpopular and unworkable automatic spending cuts to defense and domestic programs.

“Space is the world’s new war-fighting domain,” Trump said Friday during a signing ceremony at Joint Base Andrews just outside Washington. “Among grave threats to our national security, American superiority in space is vital. And we’re leading, but we’re not leading by enough, and very shortly we’ll be leading by a lot.”

Space Force will be tiny, compared to its sister services. It will initially have about 200 people and a first-year budget of $40 million. The military’s largest service, the Army, has about 480,000 active-duty soldiers and a budget of about $181 billion.

The Pentagon spends about $14 billion a year on space operations, most of which is in the Air Force budget

Later Friday, as he flew to his Florida resort aboard Air Force One, Trump signed legislation that will keep the entire government funded through September 30.

Defense Secretary Mark Esper told reporters Friday, “Our reliance on space-based capabilities has grown dramatically, and today outer space has evolved into a warfighting domain of its own.” Maintaining dominance in space, he said, will now be Space Force’s mission.

Space has become increasingly important to the US economy and everyday life. The Global Positioning System, for example, provides navigation services to the military as well as civilians. Its constellation of about two-dozen orbiting satellites is operated by the 50th Space Wing from an operations center at Schriever Air Force Base in Colorado.