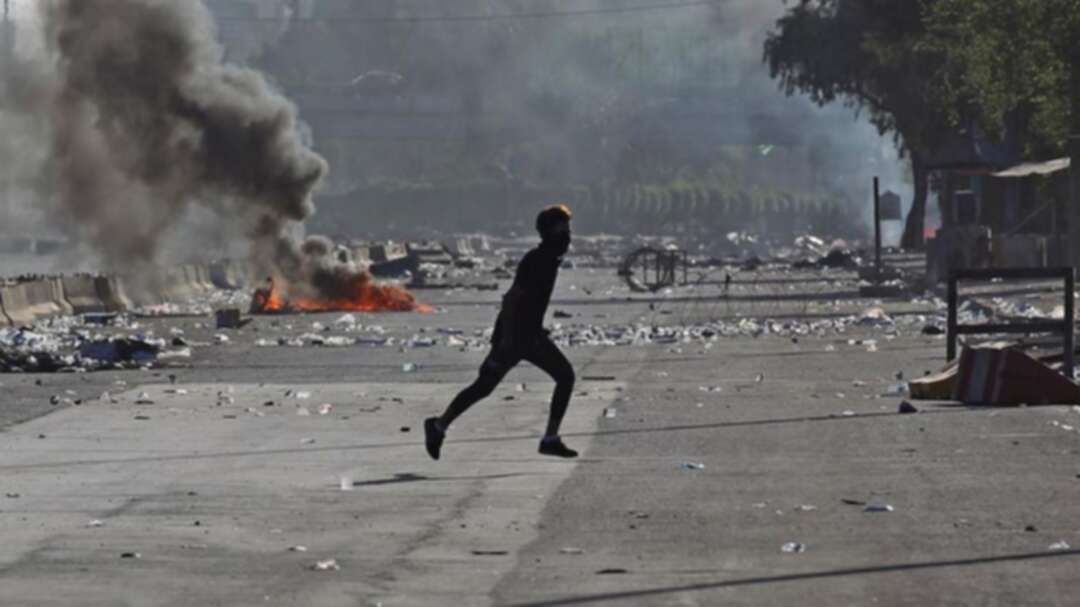 Security forces kill at least 8 in new protests in Iraq

Security forces fired live ammunition and tear gas at demonstrators on the fifth day of anti-government protests in the Iraqi capital on Saturday, killing at least eight people and wounding 17, health and security officials said.

The clashes came after authorities earlier in the day lifted a round-the-clock curfew in the capital meant to quell the unrest, sparked by popular anger over lack of jobs and endemic corruption in the oil-rich country.

The violence brought to 72 the total number of people killed over five days of protests, deepening the country’s political crisis.

The semi-official Iraqi High Commission for Human Rights, affiliated with the parliament, put the death toll at 94. It said nearly 4,000 people have been wounded since Tuesday.

The unrest is the most serious challenge for Iraq since the defeat of ISIS two years ago.

Protesters had defied the curfew, which was imposed on Thursday. The bloodiest violence in Baghdad came on Friday, when 22 people were killed.

Health officials said many of the victims’ wounds were in the head and chest.

After the curfew was lifted at 5 a.m. local time, shops and traffic returned to normal in most of Baghdad. But by early afternoon, dozens of protesters began gathering in the streets around Baghdad’s main Tahrir Square, which remained closed to cars, as armored vehicles and troops sealed off the area leading to the square.

Special forces and army vehicles were deployed around the square and as far as 2 kilometers (1.2 miles) away.

Security was heavy throughout the capital but protests in central Baghdad were limited to a couple of streets near Tahrir Square.

Health and security officials said four people were killed when forces fired at protesters gathered in a street near the square. The tear gas and live ammunition was so intense that hundreds of protesters retreated. In their new location, at least three more protesters were killed amid intense gunfire.

Four others were wounded, according to officials who spoke on condition of anonymity because they were not authorized to brief reporters. The area was the sight of Friday’s deadly violence.

To the south, in the Zaafaraniyeh neighborhood, another protester was killed and 13 were injured, according to health and police officials.

Rasoul Saray, a 34-year-old unemployed Baghdad resident who took part in the protests, said security officials at checkpoints were stopping young men and turning them away in a number of suburbs, apparently fearing they would join the protests.

Saray said he saw one young man get arrested after security officials inspected his mobile phone and found a recorded protest video.

In a related development, Iraqi officials and a member of the semi-official human rights commission said on Saturday that thousands of protesters have taken to the streets in two southern cities and have set fire to political party offices.

An Iraqi security official and the rights commission official say protesters in Nasiriyah have set ablaze the offices of two political parties in the restive southern city.

The two officials said the security forces responded with fire, but there was no immediate word on casualties. The officials described the protest as “very large.”

In another southern city, Diwaniyah, protesters marched toward local government offices. There were no reports of violence there.

The protests continued despite calls from Iraq’s top Shia cleric for both sides to end four days of violence “before it’s too late.”

Iraqi politicians have scrambled to contain the protests, calling for meetings with protest representatives and arranging for a parliament meeting to discuss their demands.

But the measures have not been enough to subdue the popular anger, apparently further fueled by the killing of protesters.

The spontaneous rallies started as mostly young demonstrators took to the streets demanding jobs, improved services like electricity and water, and an end to corruption in the oil-rich country.

“We will keep going and we won’t back down,” said Abbas Najm, a 43-year-old unemployed engineer, who was part of an earlier rally Saturday in Tahrir Square demanding an investigation into the killing of protesters. “It has been 16 years of corruption and injustice. We are not afraid of bullets or the death of martyrs.”

Protesters gathered in Tahrir Square earlier Saturday raised banners demanding the resignation of Prime Minister Adil Abdul-Mahdi and an investigation into the killings of protesters. One read: “Adil Abdul-Mahdi must resign immediately.”

Even after lifting the curfew, security remained heavy in Baghdad, and access to the Green Zone, the area housing government offices and foreign embassies, was restricted. Municipal workers were clearing the streets of the bullets and debris left behind by the latest confrontations.

A curfew remained in place in other cities in the south, where violence has been deadly in the last four days and authorities were concerned more rallies would be organized.

There was no quorum for parliament to convene after the largest bloc in parliament boycotted an emergency session called for Saturday to discuss protesters’ demands.

On Friday, influential Shia cleric Muqtada al-Sadr called on Abdul-Mahdi’s government to resign and hold early elections, saying in the shedding of blood of Iraqis “cannot be ignored.” Al-Sadr, who controls the largest bloc in parliament, also called on members of his coalition to boycott sessions until the government puts forth a program acceptable to the people.

Both Abdul-Mahdi’s office and Parliament Speaker Mohammed al-Halbusi called on protest representatives to meet to hear their demands.

In a desperate attempt to curb the growing rallies, authorities blocked the internet and imposed the curfew.

Abdul-Mahdi said in an address to the nation that the protesters’ “legitimate demands” had been heard, adding that the security measures used against the demonstrations were like “bitter medicine” that needs to be swallowed.