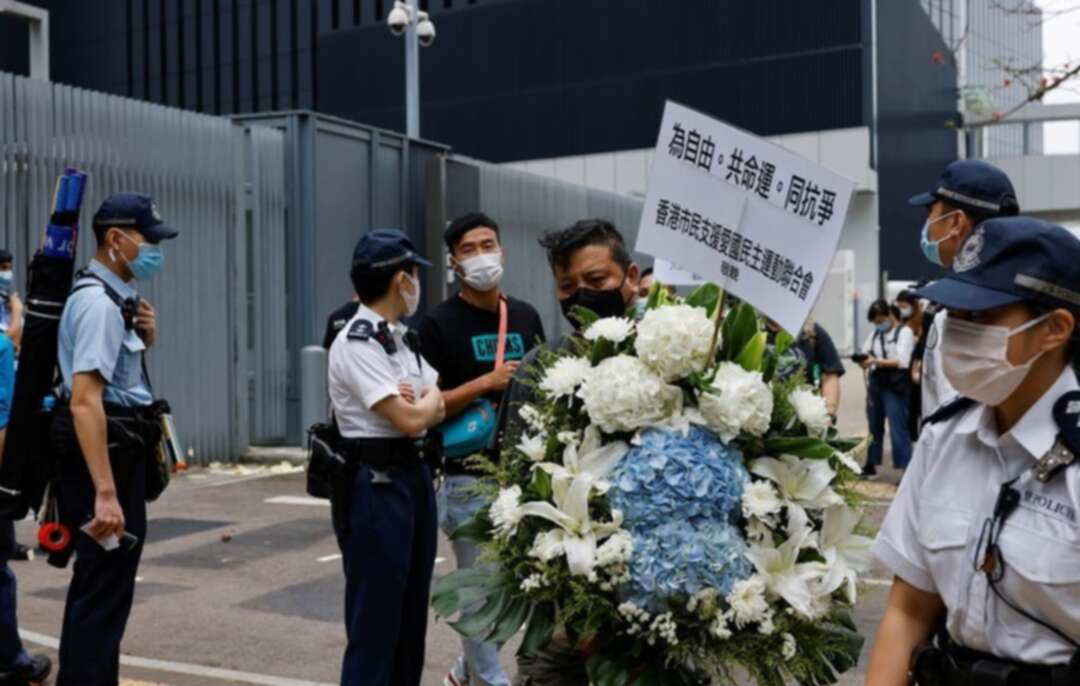 Police monitor a pro-democracy activist carrying a wreath of flowers to mourn those killed during the military crackdown on pro-democracy protesters at Beijing's Tiananmen Square in 1989, at the Qing Ming festival, or Tomb Sweeping Day, in Hong Kong, China April 4, 2021. (File photo: Reuters)

The annual June 4 vigil had been held in Hong Kong for the last three decades drawing massive crowds, but it was banned for the first time last year by police, citing the coronavirus situation.

Tens of thousands defied the ban and massed at the vigil’s traditional site in Victoria Park.

Since then prosecutors have brought charges against 24 prominent activists who showed up at the vigil, the latest in a string of criminal cases that have ensnared the city’s beleaguered democracy movement.

Unlawful assembly charges can carry up to five years in prison.

Wong, one of the city’s most prominent activists, is currently serving a jail sentence for taking part in a protest during the months of huge and often violent democracy rallies that rocked Hong Kong in 2019.

Shum and Yuen were already in custody on national security charges, which Wong also faces.

Leung was remanded into custody after her plea and the four will be sentenced on May 6.

The other defendants -- who include some of the city’s most prominent activists, many of them also jailed or in detention -- will be tried later this summer.

The annual Tiananmen vigil remembering victims of the 1989 suppression of pro-democracy protests has taken on particular significance as many Hong Kongers chafe under Beijing’s increasingly authoritarian rule.

Crowds grew in size in recent years, often chanting slogans like “End one party rule” and calling for democracy in China.

But it is unclear if Hong Kong will ever see another legal Tiananmen vigil.

Officials have already signaled that this year’s rally will be refused permission both as a security risk and because of the coronavirus.

Some have also suggested chanting “End one party rule” and other slogans could now be illegal under the new law.

“Just chanting the slogan may not necessarily violate the law, but one has to look at the evidence, what was said and done beforehand and afterwards,” former justice secretary Elsie Leung told reporters on Wednesday.

Chow Hang-tung, a barrister and member of the HK Alliance that organizes the Tiananmen vigil, said this week that the security law was being used as “a tool for political persecution”.