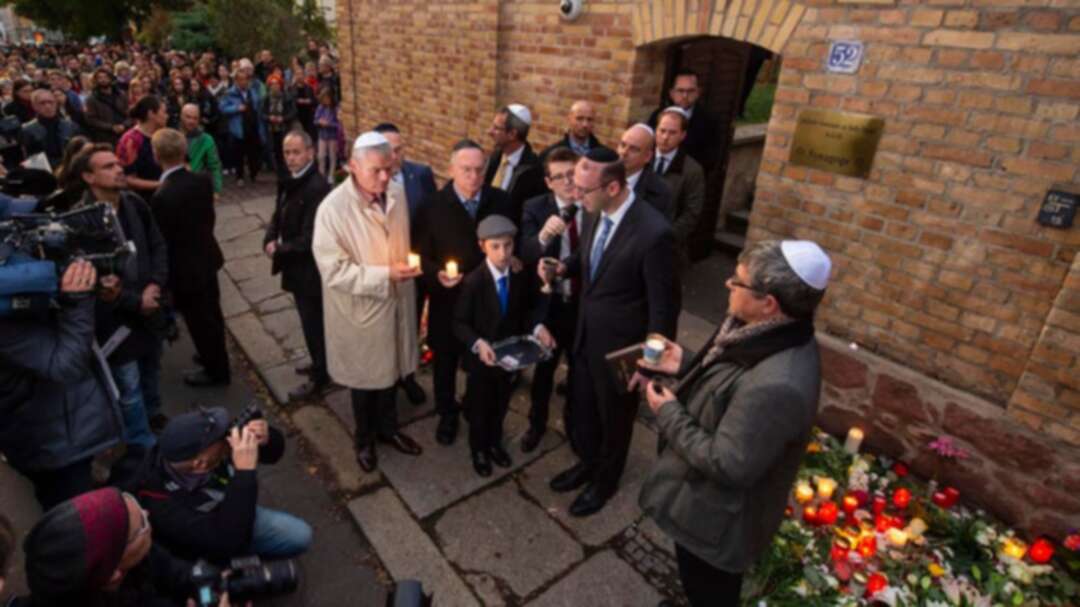 People pray together with Jewish people in front of the synagogue in Halle, Germany on October 11, 2019. (File photo AP)

Germany is planning to tighten legislation on anti-Semitic crimes, a minister said on Thursday following a deadly attack aimed at a synagogue in Halle in former East Germany last month.

Justice Minister Christine Lambrecht told parliament that anti-Semitism would be made an aggravating factor for hate crimes in the criminal code.

The current law mentions discrimination against particular groups as an aggravating factor but does not refer to anti-Semitism specifically.

“I am ashamed that Jews in Germany no longer feel safe and that so many are even thinking of leaving the country,” Lambrecht told parliament.

“We have to send a clear signal against anti-Semitism,” she said.

Josef Schuster, head of the Central Council of Jews in Germany, said the change was “an important step towards a consistent punishment of anti-Semitic crimes.”

The change is part of a package of government measures announced since the Halle attack, including obliging social media networks to report online death threats and incitement of racial hatred to police.

In the Halle attack, a gunman opened fire on a kebab shop after earlier trying and failing to storm a synagogue. He killed a 20-year-old customer in the shop and a female passer-by before being arrested.

Anti-Semitic offenses rose by almost 10 percent in Germany last year, with violent attacks going up more than 60 percent, according to preliminary police data released in February.

Police recorded 1,646 offenses motivated by hatred against Jews, the highest level in a decade.

Among these were 62 violent offenses that left 43 people injured, up from 37 physical attacks the previous year, the data showed.