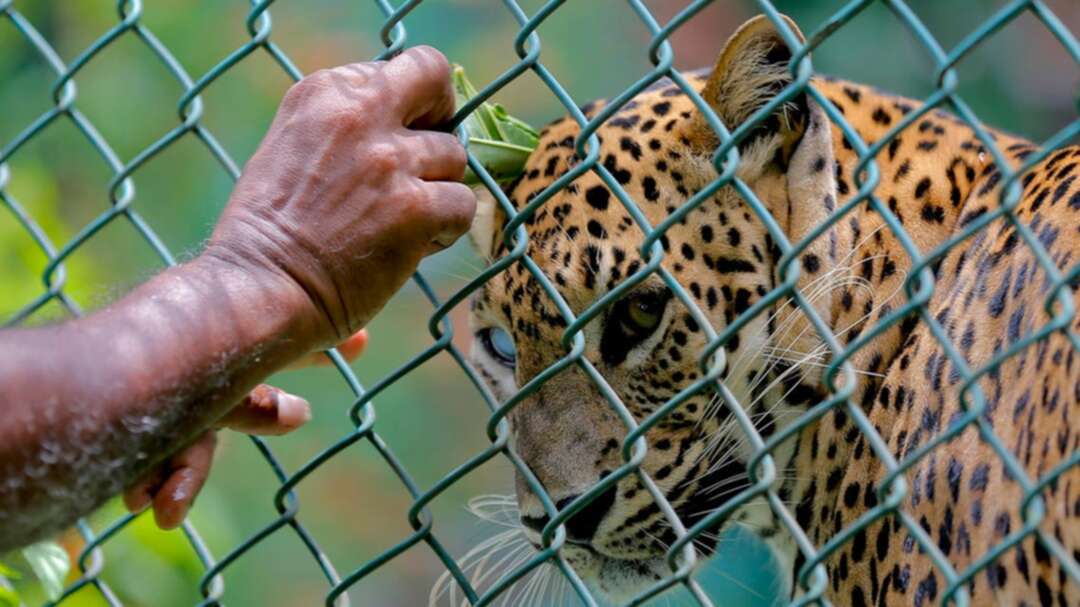 A Sri Lankan zoological garden employee reaches to apply oil on a leopard as a blessing ritual to mark the Sinhalese and Tamil traditional New Year in Colombo, Sri Lanka, Saturday, April 16, 2016. The ritual of anointing oil is performed on both people and animals as a part of New Year celebrations. (File photo: AP)

Residents in a Chinese city were warned to stay indoors as authorities released flocks of chickens as bait to track down a leopard that escaped from a safari park, state media reported Tuesday.

The leafy lakeside city of Hangzhou has been on edge since late last week, when residents began spotting leopards roaming around local hills covered in forest and tea plantations.

The leopard is one of three that escaped on April 19 -- the other two have since been recaptured -- a lapse that police said was concealed by the Hangzhou Safari Park’s management for nearly three weeks to avoid hurting its visitor numbers during a long holiday last week.

The incident has unleashed a torrent of Chinese internet posts savaging the park for endangering the public, and lamenting the abysmal safety and animal-welfare record of the country’s chaotic zoos and wildlife parks.

Public outrage has also been fanned by footage of one of the big cats being mauled in a forest by a pack of fierce hunting dogs, and another showing one of the recaptured leopards with part of its hind foot missing.

The first leopard was quietly recaptured by the park on April 21, and the second last Friday by a far larger government search organized as news of the escapes went viral.

But the remaining feline has so far eluded the thousands of search personnel using tracker dogs, powered parachutes, and armed with drones and night-vision and heat-detection equipment.

Nearly 100 chickens were released to lure the cat, the Modern Express Post in the nearby city of Nanjing reported Tuesday.

Like the other two escapees, it was captive-born, lacks hunting smarts and is believed to be near starvation.

Authorities also have posted additional security near the search zone and residents have been put on alert.

“Leopard tracks have been discovered near mountain villages. Police are searching. Everyone please securely close doors and windows and do not go out,” said a mass text message issued in a neighborhood adjacent to the park.

The park is about a dozen miles from downtown Hangzhou.

Police said Monday that careless park personnel allowed the animals to escape while cleaning their enclosure and that the attraction’s general manager Zhang Dequan ordered a cover-up while the park scrambled to recover the animals themselves.

The park only came clean after police launched an investigation into the mounting leopard sightings.

Local officials have said five people, including Zhang, have been detained. The park is temporarily closed.

Chinese state media reported in 2017 that a tiger killed a visitor at a wildlife park in the eastern city of Ningbo after the man apparently entered its enclosure. Tigers at a Beijing park also killed a woman and injured another the previous year after the pair left their vehicle.