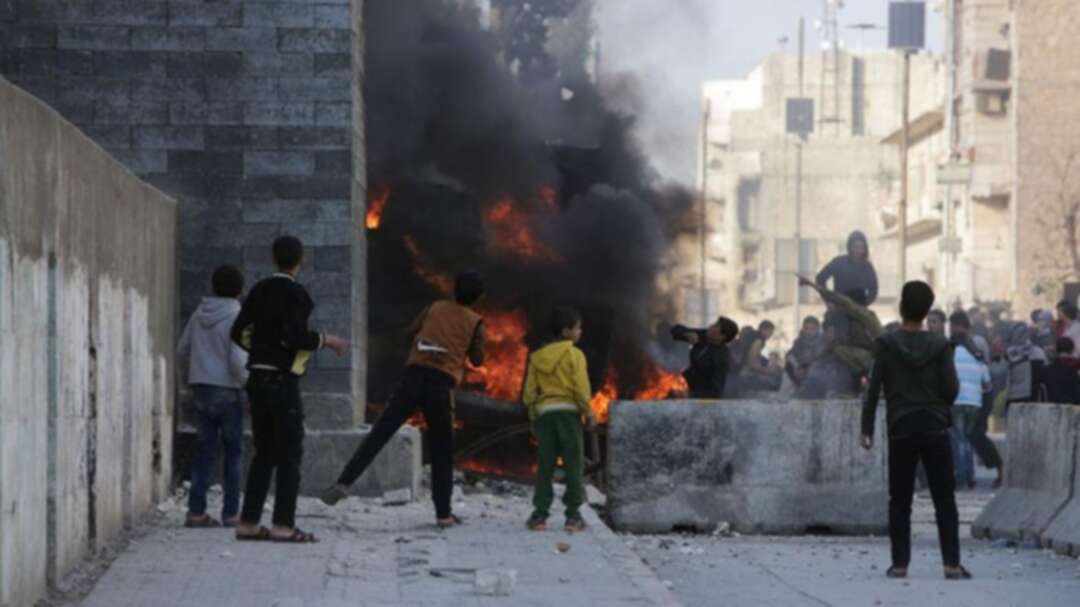 Syrian protesters burn a Turkish military vehicle during a demonstration against Turkey's presence in northern Syria on November 17, 2019 in the town of al-Bab in Syria's northern Aleppo governorate. (AFP)

At least seven civilians were killed on Thursday in the Syrian government-controlled city of Aleppo in intense shelling from rebel-held areas in the country’s northwest.

The shelling comes a day after Syrian government troops bombed a displaced people’s camp in the nearby rebel-held areas, killing at least 15 people, including six children. The violence has effectively shattered a fragile three-month truce in the area, sponsored by Turkey and Russia.

The bloodshed in the northwest also comes as Syrian troops are mired in intense fighting with Turkey-backed fighters in the country’s northeast. Turkey is seeking to expand its areas of influence in Syria’s north, pushing Kurdish fighters away from its borders. While Russia sponsored another cease-fire deal in the northeast, Turkey-backed fighters also advanced there, clashing with Syrian government troops for weeks.

In the violence on Thursday, a reporter from state-run Al-Ikhbariya said rebels shelled several neighborhoods in Aleppo, Syria’s second largest-government-controlled city. The reporter visited the city’s hospitals, saying 30 others were wounded.

The Syrian Observatory for Human Rights, a Britain-based war monitor, said at least six were killed in the shelling by rebel groups who live on the western outskirts of the city and in opposition-controlled Idlib Province.

On Wednesday, government forces shelled camp Qah, near the border with Turkey, killing 15, including six children and two women. The Observatory said the attack caused fires in several tents while surface-to-surface missiles struck an area in the camp close to a maternity hospital.

The insurgents retaliated by firing on Aleppo, but there was no word of casualties.

Syrian troops launched a four-month offensive earlier this year against the country’s last opposition stronghold in Idlib, which is dominated by al-Qaida-linked militants.

The government offensive forced hundreds of thousands of civilians to flee their homes. A fragile cease-fire halted the advance at the end of August, but in recent weeks it has been repeatedly violated.