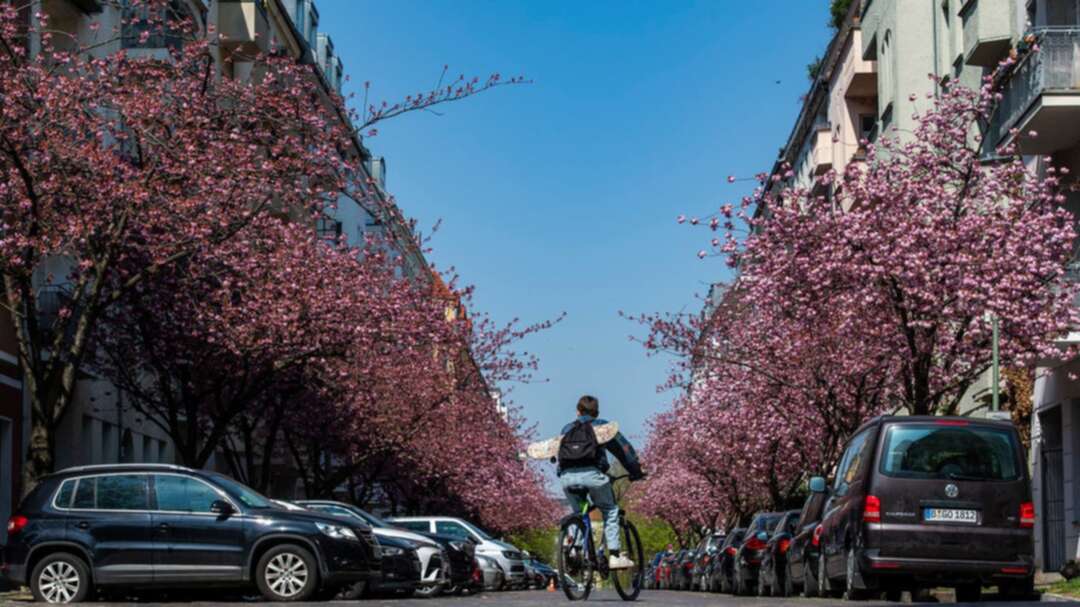 A youth cycles down a street lined with blossoming cherry trees in Berlin on April 28, 2021. (AFP)

Several individuals from Germany and elsewhere, backed by environmental groups, had filed four complaints to the Constitutional Court arguing that their rights were impinged by the lack of sufficient targets beyond the next decade.

Germany, like other European Union countries, aims to cut emissions by 55 percent by 2030 compared with 1990 levels. Legislation passed in 2019 set specific targets for sectors such as housing and transport for that period, but not for the long-term goal of cutting emissions to ‘net zero’ by 2050.

“The regulations irreversibly pushed a very high burden of emissions reduction into the period after 2030,” judges said in their ruling.

They cited the Paris accord goal of keeping global warming well below 2 degrees Celsius (3.6 Fahrenheit), ideally 1.5 C (2.7 F) by the end of the century compared with pre-industrial times.

The court ordered the government to come up with new targets from 2030 onward by the end of next year.

Lawyer Felix Ekardt, who brought one of the cases, said the verdict was “groundbreaking” for Germany.

“Germany’s climate policy will need to be massively adjusted,” he said.

“It’s an incredibly good day for hundreds of thousands of young people,” said climate activist Luisa Neubauer, who was one of the plaintiffs.

Germany is holding federal elections in September. The environmentalist Greens party, which has called for tougher emissions reduction targets, is currently leading in several polls.