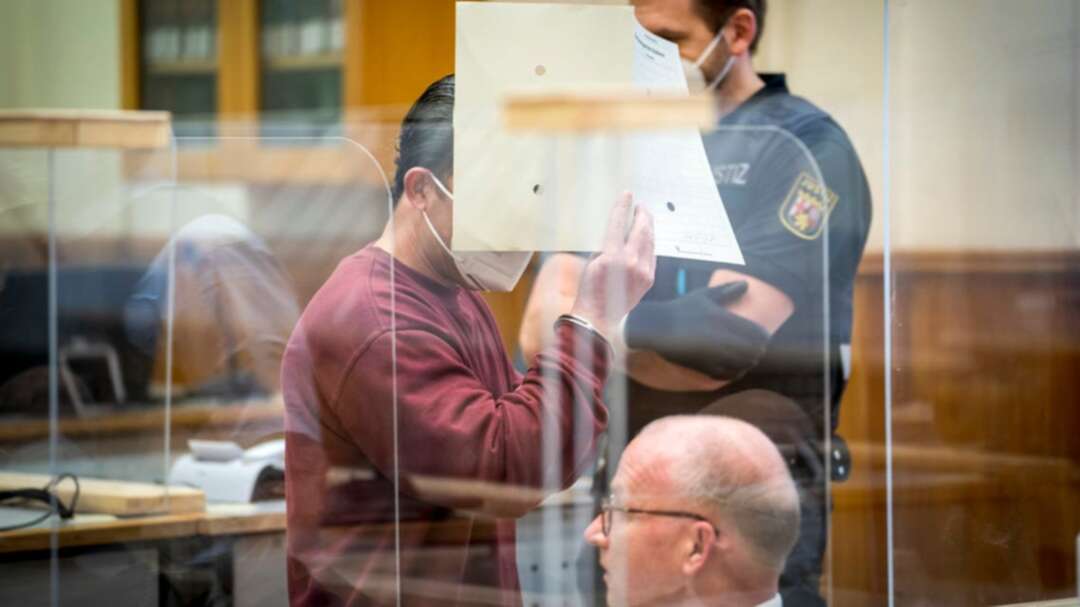 Syrian defendant Eyad Al-Gharib hides his face as he arrives to his hear his verdict in a court room in Koblenz, Germany, Wednesday, Feb. 24, 2021. (AP)

A former member of Syrian President Bashar Assad’s secret police was convicted Wednesday by a German court of facilitating the torture of prisoners in a landmark ruling that human rights activists hope will set a precedent for other cases.

Eyad Al-Gharib was convicted of accessory to crimes against humanity and sentenced by the Koblenz state court to 4 and a half years in prison, the dpa news agency reported.

It was the first time that a court outside Syria ruled in a case alleging Syrian government officials committed crimes against humanity. German prosecutors invoked the principle of universal jurisdiction for serious crimes to bring the case that involved victims and defendants who were in Germany.

Details of the ruling were not immediately available, but Al-Gharib could have been sentenced to more than a decade behind bars. However judges were able to consider his defection and court testimony as mitigating factors.

Al-Gharib was accused of being part of a unit that arrested people following anti-government protests in the Syrian city of Douma and took them to a detention center known as Al Khatib, or Branch 251, where they were tortured.

The 44-year-old went on trial last year with Anwar Raslan, a more senior Syrian ex-official who is accused of overseeing the abuse of detainees at the same jail near Damascus. 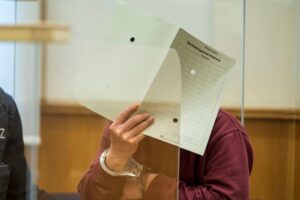 Syrian defendant Eyad Al-Gharib hides his face as he arrives to his hear his verdict in a court room in Koblenz, Germany, Wednesday, Feb. 24, 2021. (AP)

Raslan is accused of supervising the “systematic and brutal torture” of more than 4,000 prisoners between April 2011 and September 2012, resulting in the deaths of at least 58 people. A verdict in his case is expected later this year.

Balkees Jarrah, associate international justice director at Human Rights Watch, said the conviction of Al-Gharib “gives Syrians some hope that this may be the beginning of a path to fuller justice.”

“Germany’s trial of two former Syrian officials for atrocities shows that it’s possible with drive and perseverance and determined prosecutors for victims to have their day in court,” she said.

Evidence reviewed during the trial included photographs of thousands of alleged victims of torture by the Syrian government. The images were smuggled out of Syria by a police officer.

Syrian government officials did not testify during the trial.

“Over the last ten months, courageous survivors have provided testimony about horrific abuses committed in Syria’s ghastly archipelago of prisons,” Jarrah said. “This case not only speaks to the role of the two suspects but also lays bare the Syrian government’s systemic torture and killing of tens of thousands of people.”

Al-Gharib was one of Raslan’s subordinates. When he was a sergeant major, his unit was allegedly involved in chasing down and detaining at least 30 people following a demonstration in Douma, and then bringing them to the detention center where they were tortured.

Al-Gharib left Syria in 2013 and came to Germany in 2018. Both men were arrested a year later.