Saudi Arabia’s Minister of Foreign Affairs Prince Faisal bin Farhan was officially handed over the Group of 20 batons from Japan’s Foreign Minister Toshimitsu Motegi at a ceremony on Saturday in Nagoya, signaling the Kingdom’s G20 presidency of the 2020 summit, which is to be hosted Riyadh.

Prince Faisal arrived in Japan on Friday, where he met with the foreign ministers of the Group of 20 and discussed free trade, sustainable development and how to assist rapidly growing economies in Africa.

The two-day event is the last of the eight ministerial G20 meetings to be chaired by Japan this year.

“Under the guidance of the Custodian of the Two Holy Mosques and the Crown Prince, I was honored today to take over the Kingdom’s presidency of the Group of 20 for 2020. It will be a year full of hope and work, and a year filled with communication and dialogue, where people will be at the heart of sustainable development and the primary beneficiary of today’s technology. Welcome to Saudi Arabia,” Prince Faisal wrote on his official Twitter account. 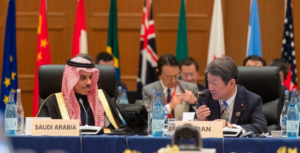 King Salman has hailed the Kingdom’s G20 presidency as proof of its key role in the global economy.

Japan - which headed the G20 this year - was the Kingdom’s second-largest export market last year, at $33 billion, according to IMF trade data.

Japanese Foreign Minister Toshimitsu Motegi told Prince Faisal he was pleased to meet him for the first time and both sides wanted to boost relations, according to a read-out from Japan’s foreign ministry.

Diplomats said that Saudi Arabia plans more than a dozen G20 summits throughout the year on tourism, agriculture, energy, environment, and the digital economy.