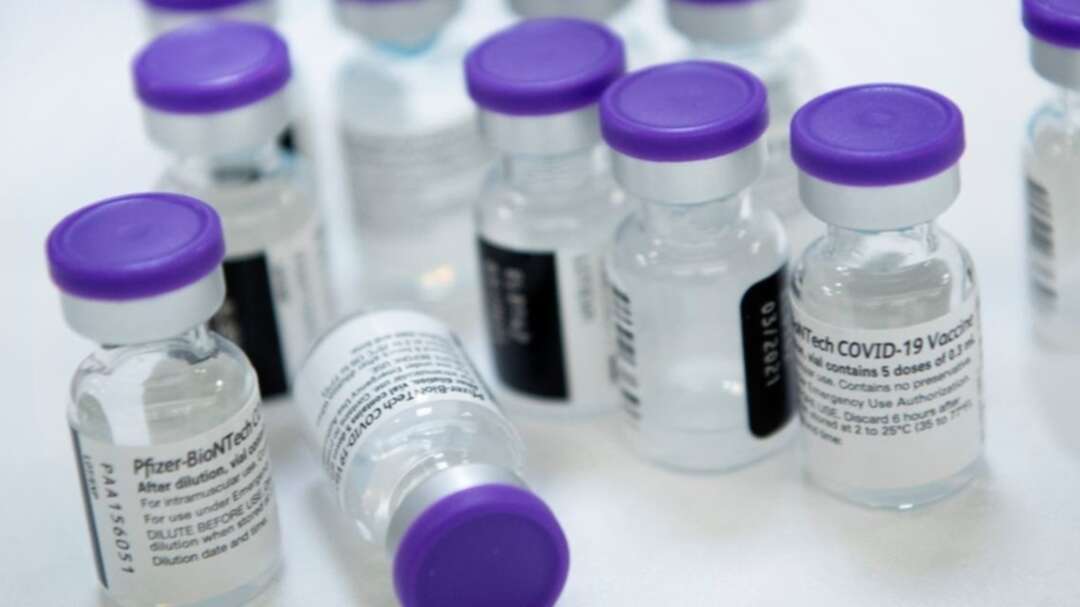 Vials of undiluted Pfizer COVID-19 vaccine are prepared to administer to staff and residents at the Goodwin House Bailey's Crossroads, a senior living community in Falls Church, Virginia, on December 30, 2020. (AFP)

Two Canada-based researchers on Wednesday urged governments to delay administering the second dose of Pfizer Inc’s COVID-19 vaccine, which they said had an efficacy of 92.6 percent after the first dose, as it was not significantly beneficial in the short term.

Danuta Skowronski and Gaston De Serres said their findings were derived from Pfizer’s documents submitted to the US Food and Drug Administration (FDA).

These findings were also similar to the first-dose efficacy of 92.1 percent reported for Moderna Inc’s mRNA-1273 vaccine, Skowronski and De Serres said in their letter published in the New England Journal of Medicine.

They cautioned that there may be uncertainty about the duration of protection with a single dose, but said that the administration of the second dose a month after the first provided “little added benefit in the short term”.

“Given the current vaccine shortage, postponement of the second dose is a matter of national security that, if ignored, will certainly result in thousands of COVID-19–related hospitalizations and deaths this winter in the United States,” the authors warned.

In its response, Pfizer said that alternative dosing regimens of its vaccine had not been evaluated yet and the decision to do that resided with the health authorities.

“We at Pfizer believe that it is critical for health authorities to conduct surveillance on implemented alternative dosing schedules to ensure that vaccines provide the maximum possible protection,” the company added.

In Britain, authorities have said that data supported its decision to move to a 12-week dosing schedule for Pfizer’s COVID vaccine. Both Pfizer and its partner BioNTech have warned that they had no evidence to prove it.

However, the US FDA and the European Medicines agency (EMA) have stuck by the interval tested in the trials.

EMA has said there should be a maximum interval of 42 days between the first and the second shot of the vaccine, while FDA mandates a gap of 21 days between the two doses of the Pfizer vaccine.