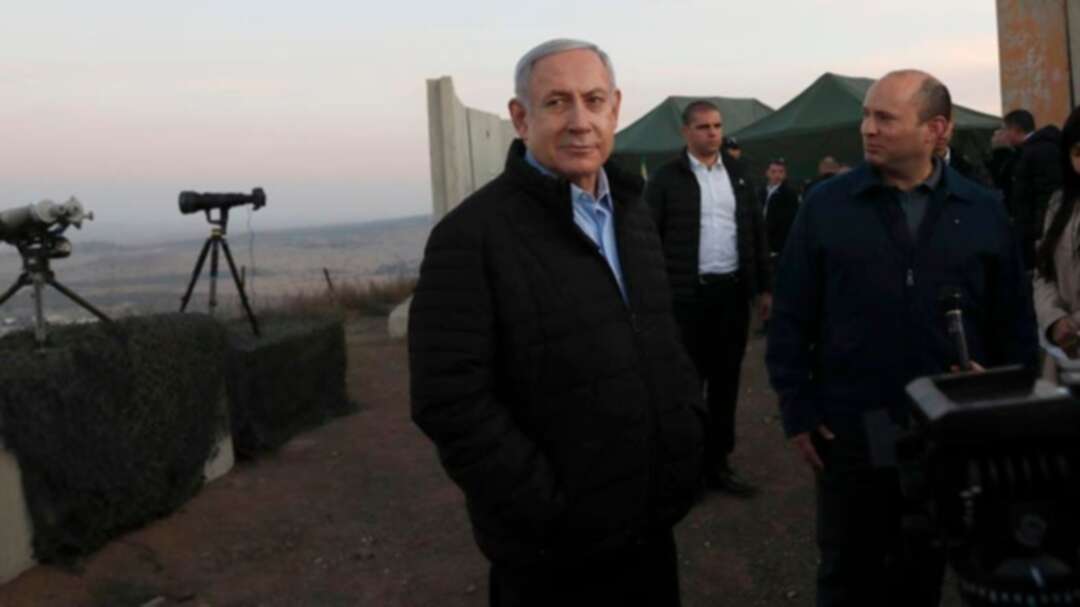 Netanyahu and Defense Minister Naftali Bennett visit an Israeli army base in the occupied Golan Heights on November 24, 2019. (AP)

Israeli Prime Minister Benjamin Netanyahu on Sunday accused Iran of planning attacks against Israel and said everything possible would be done to prevent them.

The premier, who was indicted on corruption charges on Thursday and is seen to be battling for his political life, made his remarks on a visit to an army base near the border with conflict-ravaged Syria.

“Iran’s aggression in our region, and against us, continue,” Netanyahu said.

He was speaking on the day US General Mark Milley, chairman of the Joint Chiefs of Staff, was in the country to meet his Israeli counterpart Aviv Kohavi.

Speaking on the Israeli-annexed Golan Heights, Netanyahu said: “We are taking all necessary actions to prevent Iran from entrenching here in our region.”

“This includes the activity necessary to thwart the transfer of lethal weaponry from Iran to Syria, whether by air or overland.

“We will also take action to thwart Iran’s effort to turn Iraq and Yemen into bases for launching rockets and missiles” at Israel, he added.

On Wednesday, in a rare confirmation of such operations, Israel said its warplanes carried out a “very intense” attack against Iranian forces and Syrian army targets in Syria.

Britain-based monitoring group the Syrian Observatory for Human Rights said 23 people were killed in the strikes -- 21 fighters and two civilians.

Attorney-General Avichai Mandelblit announced Thursday he had charged Netanyahu with bribery, fraud, and breach of trust, prompting speculation that the end of the premier’s decade-long tenure was nigh.