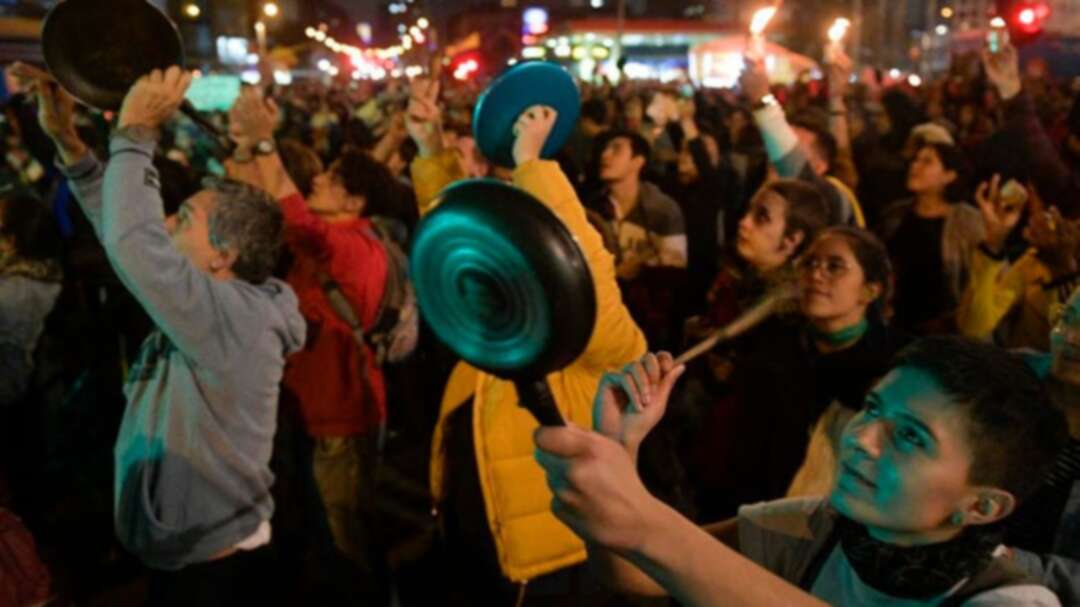 Colombians protest against the government of President Ivan Duque, in Bogota, on November 23, 2019. (AFP)

Duque, a conservative who is deeply unpopular 18 months after his election, “initiated the social dialogue” with mayors and other officials at 3:00 pm (2100 GMT), the presidency said in a statement.

The president had proposed the talks on Friday in response to nationwide protests a day earlier that descended into violence, leaving three dead.

Duque said at the weekend that he would meet Monday with the ministers of finance, labor, and trade, along with representatives of business owners and workers, while dialogue with “different social sectors” would take place during the week.

Protesters are demanding, among other things, a crackdown on drug trafficking and violence, more flexible labor market conditions and improved retirement benefits.

Duque, 43, has been criticized for his economic, social and security policies, as his administration deals with hosting 1.4 million refugees from neighboring Venezuela’s economic meltdown as well as the complex fallout of a 2016 peace deal with FARC rebels.

Hundreds of thousands took to the streets in Bogota and other cities on Thursday as part of a nationwide general strike.

There were arrests and clashes as trade unions, students, opposition parties and the South American country’s indigenous organizations vented their anger.

Three people have died and nearly 300 were wounded in the unrest.

There were further demonstrations on Friday and Saturday, and hundreds of people defied a curfew in the capital - the first imposed since 1977 - to converge in front of Duque’s home, singing the national anthem and banging pots and pans for an hour.

In Bogota, some 13,000 soldiers and riot police have been deployed to keep watch over sensitive neighborhoods in the city of seven million.