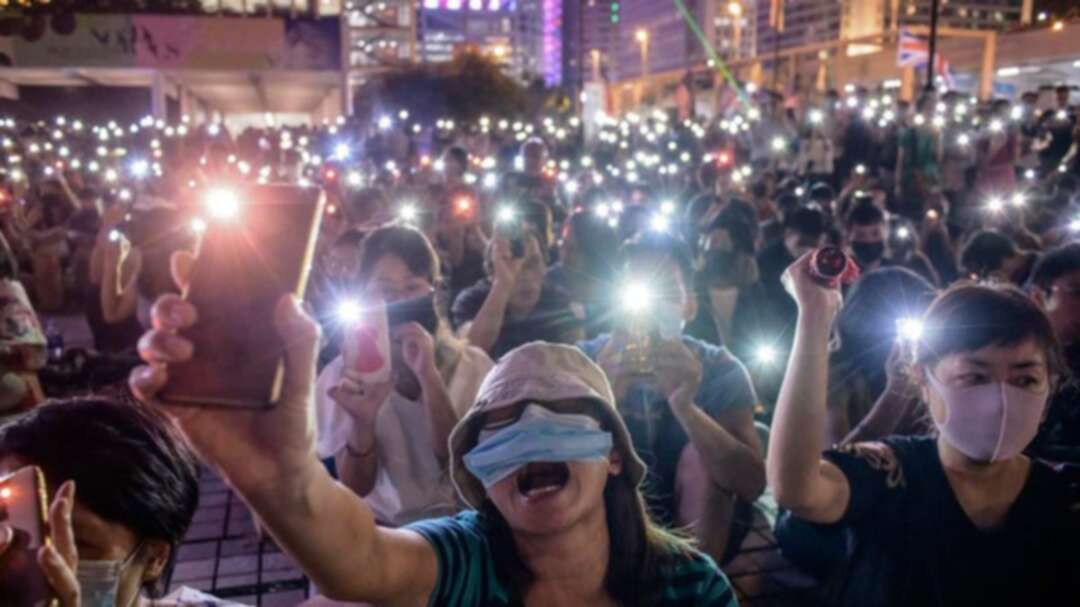 Attendees shout slogans and hold their mobile phones during a rally to show support for pro-democracy protesters in Hong Kong on October 19, 2019. (AP)

Hong Kong tightened security ahead of a planned anti-government march on Sunday afternoon, with some metro services halted and public facilities shuttering as pro-democracy leaders called on citizens to join the protest in spite of the risk of arrest.

Police have banned the march in the city’s Kowloon district, citing concerns over public safety, and a court on Saturday said the destination of the march - the main railway interchange with mainland China - could be attacked and vandalized.

Protesters are still expected to take to the streets in what is seen as a test for the protest movement’s strength following over four months of unrest in the Asian financial hub.

The city’s subway operator MTR Corp Ltd said some services will not stop at Kowloon station, which is on the route of Sunday’s march, and will again close the network two hours early by 10 pm.

At the city’s high speed rail station in Kowloon several areas were closed and only passengers with tickets were permitted entry. All food and beverage outlets were also closed.

Hong Kong has been relatively calm in the past two weeks after violent protests fueled by the introduction of colonial-era emergency laws.

A prayer sit-in on Saturday evening drew hundreds of people to the central business district, while on Friday protesters formed a human chain along the metro network. Many donned masks in defiance of a ban on covering faces at public rallies.

However, the city’s Kowloon area has been the site of some of the worst violence in recent weeks.

Sham heads CHRF, one of the biggest pro-democracy groups in the former British colony, which organized million-strong marches in June and planned Sunday’s march.

Protesters say they will continue to urge the government to address their demands for universal suffrage, an independent inquiry into police behavior, amnesty for those charged, and an end to describing protesters as rioters.

Thousands of people, including families with children, have previously defied police to stage mass rallies without permission.

These have often begun peacefully but become violent at night with some protesters have hurling petrol bombs and bricks at police, who have responded by firing water canon and volleys of tear gas.

Hong Kong is governed under a “one country, two systems” formula, which permits the city freedoms not available on the mainland such as an independent judiciary. Beijing has rejected claims it is encroaching on these freedoms.