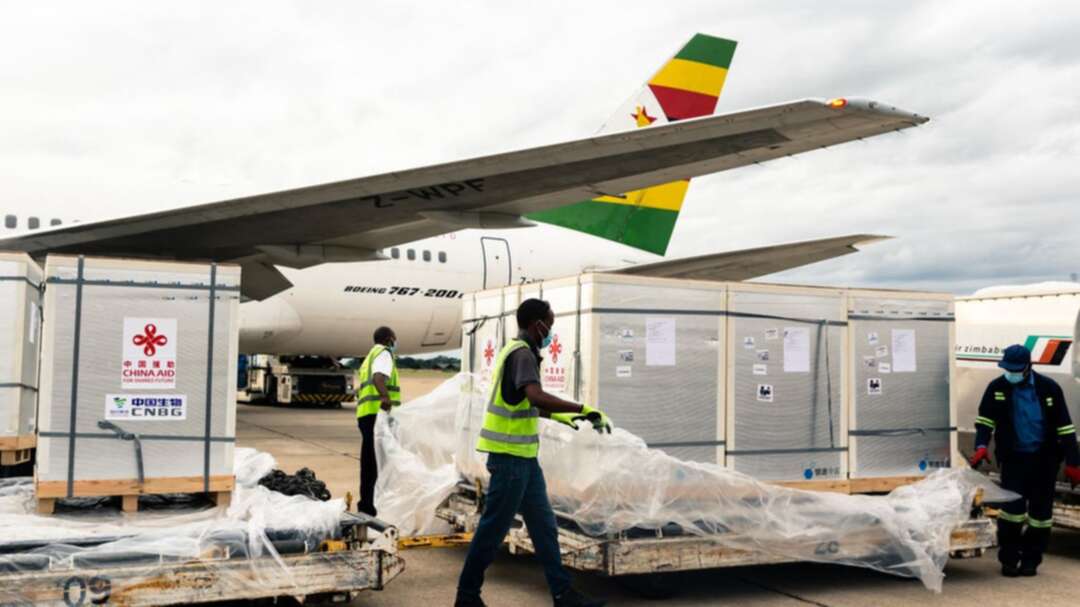 Workers offload part of a consignment of 200,000 doses of the Sinopharm coronavirus vaccine from China off an Air Zimbabwe aeroplane which has just landed on February 15, 2021 at the Robert Mugabe International Airport. (AFP)

Zimbabwe has received its first COVID-19 vaccines with the arrival early Monday of an Air Zimbabwe jet carrying 200,000 Sinopharm doses from China.

It is one of China’s first shipments of vaccines to Africa, after deliveries to Egypt and Equatorial Guinea.

The first Sinopharm vaccines are a donation from China to the southern African country. President Emmerson Mnanagagwa’s government has purchased an additional 600,000 doses of the Sinopharm vaccine that are expected to arrive early next month, according to the state media.

Zimbabweán Vice President Constantino Chiwenga was at the Harare airport for the arrival of the vaccines.

“It has not been lost on us that in times of need China’s response has been swift,” he said, describing China’s donation as “yet another demonstration of the long bond of friendship and solidarity.”

China’s ambassador to Zimbabwe Guo Shaochun said that Zimbabwe is one of the first of 58 countries to receive donations of the Sinopharm vaccine.

“Zimbabwe is our brother so the supply of vaccines to Zimbabwe is not a problem,” he said.

Zimbabwe’s health professionals and immigration agents working at border posts will get first priority for the vaccines, according to a government rollout plan. 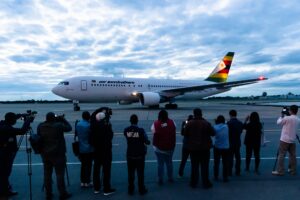 Journalists take footage as an Air Zimbabwe aeroplane arrives with a donation of 200,000 doses of the Sinopharm coronavirus vaccine from China on February 15, 2021 at the Robert Mugabe International Airport. (AFP)

The Chinese vaccines are just the start of the millions needed for Zimbabwe to vaccinate 10 million people, representing 60 percent of the country’s population, to achieve herd immunity, say health officials.

Zimbabwe “has also submitted its expression of interest” to be part of an initiative by the African Union to bulk buy vaccines for the continent, Information Minister Monica Mutsvangwa said last week.

The government says it has budgeted $100 million for vaccines and local businesses have also been asked to donate to the effort.

Since 2003 Zimbabwe has looked to China, and also Russia, for assistance after falling out with Western countries that imposed sanctions in response to allegations of human rights abuses and vote-rigging by then-president Robert Mugabe, who lost power in 2017 and died in 2019.

Mugabe’s successor, Mnangagwa, has continued close ties with China and Russia as Western countries maintain sanctions, charging that he is as repressive as his predecessor.

Vaccination campaigns are just starting to be launched across Africa, with jabs being given in only a few of the continent’s 54 countries, with a total population of 1.3 billion.

A massive campaign is required to vaccinate an estimated 680 million people to achieve population immunity, according to the Africa Centers for Disease Control and Prevention. Experts expect vaccines to start arriving on the continent in higher quantities later this year and next year.

Zimbabwe, like many other African countries, initially recorded low numbers of COVID-19 but has recently experienced a spike in cases.

There are fears that a new, more infectious variant of the virus came to the country when scores of thousands of Zimbabweans living in South Africa returned home for the holiday season.

Zimbabwe has reported 35,104 cases, including 1,398 deaths, on Feb. 14, up from the slightly more than 10,000 cases and 277 deaths at the beginning of December. The country’s once-robust public health system has deteriorated along with the economy over the past two decades.