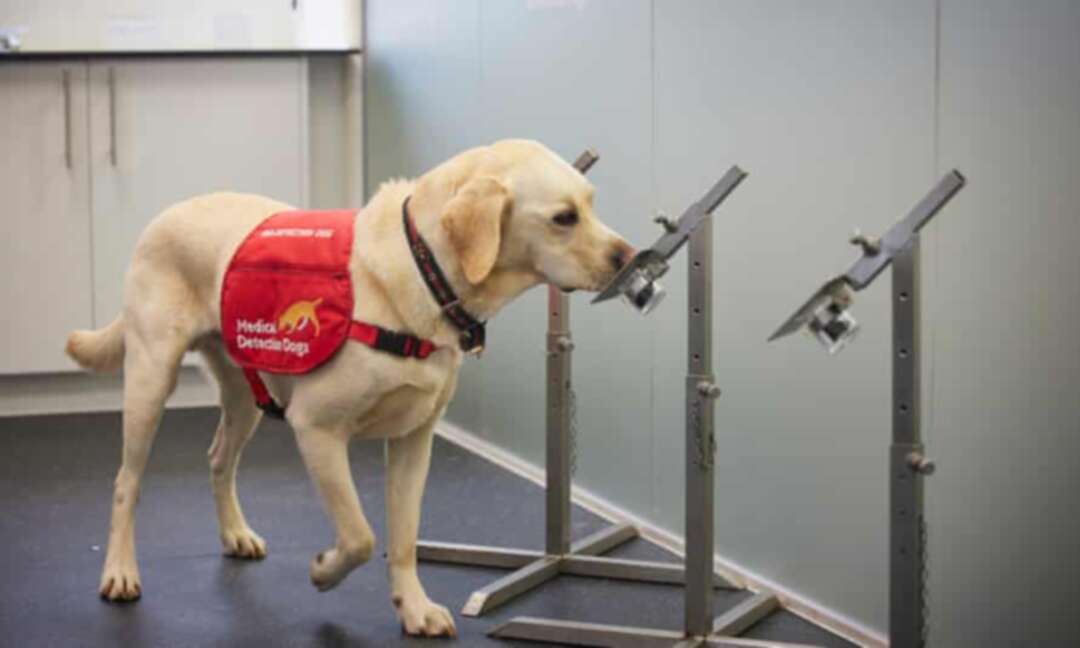 Tala, 3, a medical detection dog, during training to detect the presence of Covid-19 in samples of socks worn for 12 hours by volunteers across the UK. Photograph: David Levene/The Guardian

Faster than PCR and more accurate than lateral flow tests, the latest weapons against Covid-19 have four legs and a wet nose.

A study published on Monday found that people who are infected with coronavirus give off a distinct odour, which these highly trained dogs can detect with pinpoint precision.

Tala, a golden labrador in a red work jacket, greets me with a cursory sniff, before returning to his handler. I’m relieved to have passed the test, but feel a wet train of mucus on my hand where I petted him. This mucus fulfils an important purpose: dissolving odour molecules from the air and transporting them to olfactory receptors in the top of their nose, where the magic happens. Whereas humans have about 5m of these receptors, dogs have up to 300m.

Dr Claire Guest has always been fascinated by dogs, and humans’ relationship with them. After studying psychology, she worked for Hearing Dogs for Deaf People, where she met a woman who said her pet dalmatian had diagnosed a malignant melanoma on her calf. “She kept saying, ‘The dog sniffed it,’” Guest recalled. In 2002, Guest joined forces with an orthopaedic surgeon, John Church, to test whether dogs could be trained to distinguish between urine from healthy people and those with bladder cancer. The research, published in the BMJ, showed that they could.

Medical Detection Dogs was formed in 2008. The charity trains companion dogs that can detect odour changes in people with type 1 diabetes and other severe disorders, emitted shortly before their health deteriorates, alerting them to take action. It also researches dogs’ abilities to detect cancers, and other diseases, including Parkinson’s. When the pandemic hit it had just completed a study with the London School of Hygiene & Tropical Medicine (LSHTM), demonstrating that dogs can detect malaria.

Tala is one of six dogs who took part in the Covid study, which has not yet been peer-reviewed. It found that dogs could detect Covid-19 on clothing worn by infected people with up to 94.3% sensitivity: they would correctly identify 94 out of every 100 infected people. This compares with a sensitivity of 58-77% for lateral flow tests, and 97.2% for PCR tests.

However, dogs beat PCR tests on speed, making a diagnosis in under a second. “This includes people who are asymptomatic and also people with a low viral load,” said Prof James Logan of LSHTM, who co-led the study.

Tala was the most accurate sniffer, achieving 94.5% sensitivity, and a specificity of 92% – the proportion of uninfected people that he would correctly identify.

I watch as Tala’s trainer, Mark Somerville, guides him towards three low stands, each holding a fragment of blue nylon sock beneath a metal grille. The labrador’s assessment is over in seconds: he walks calmly up to each stand, swiftly passing his nose over the grilles, before pausing at the second and furiously wagging his tail – Tala’s way of communicating that he has identified the target scent.

Each dog has a different “tell”. Millie, a fox red golden retriever, sits and utters a whining sound when she detects the target sock. Other dogs stand stock-still.

Tala is one of Guest’s dogs, and the great nephew of Daisy, a detection dog pioneer who was involved in the original bladder cancer study – and subsequently diagnosed an early-stage tumour in Guest’s breast. “She just kept staring at me and nudging,” Guest said.

Some of the dogs were born into this occupation, others are rescue dogs that have been donated. Asher, a cocker spaniel who also lives with Guest, was too active for his previous family but is now a valued member of the Covid-detection squad.

It takes eight to 10 weeks to train a Covid-19 detection dog. They are rewarded with an edible treat or ball for correctly indicating a positive sample or correctly ignoring a negative one. For the Covid study, the dogs were trained using T-shirts, socks and masks donated by members of the public and NHS staff, some of whom had tested positive for Covid.

Accurate as they are, dogs will never replace PCR tests. While they might be useful at airports, where they could rapidly screen disembarking passengers, those identified would require a confirmatory PCR test, and to quarantine while awaiting the results – but this would inconvenience far fewer people than requiring everyone to quarantine and undergo PCR tests.

The biggest challenge is scaling up: training takes time, and requires clothing worn by infected and uninfected individuals. Work is under way to identify which odour molecules the dogs are detecting; this could enable a “pseudo-odour” to be manufactured, increasing the number of dogs that could be trained.

So will you see Covid sniffer dogs at airports in the near future? Given that similar projects are under way in countries including Finland, France and Lebanon, it seems entirely paw-sible.