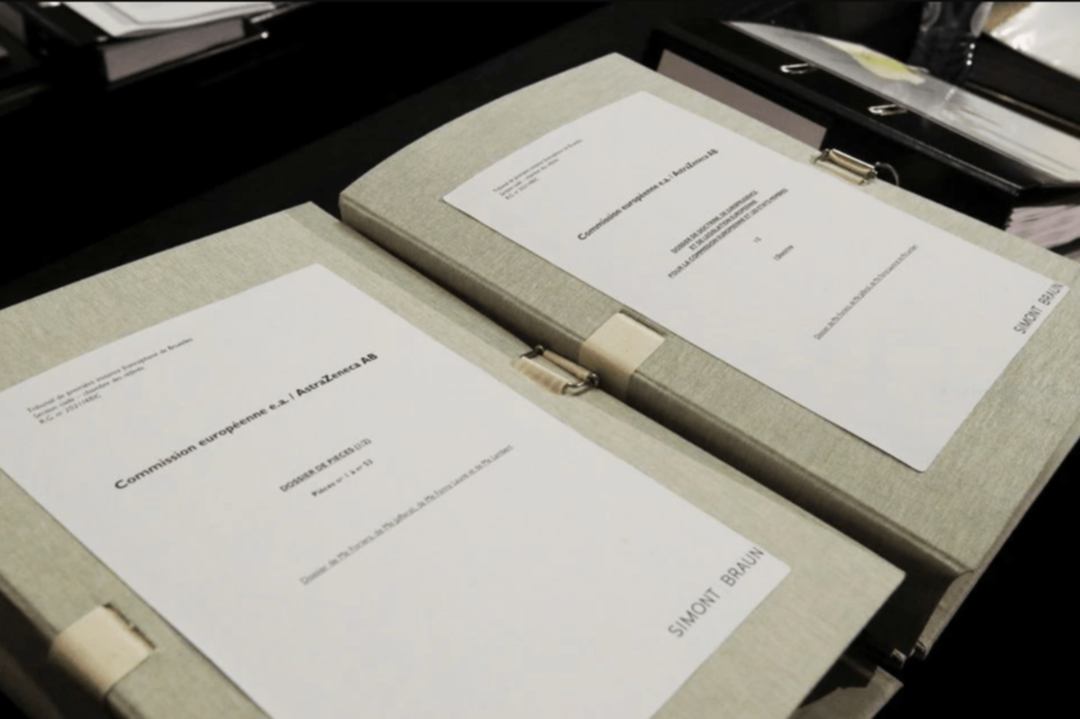 Documents are seen ahead of a hearing at a Belgian court in the legal case against the AstraZeneca firm accused by the EU of having breached its contract for the supply of the coronavirus disease (COVID-19) vaccines, in Brussels, Belgium May 26, 2021. REUTERS/Yves Herman

A lawyer for the European Union accused AstraZeneca (AZN.L) on Wednesday of failing to respect its contract with the 27-nation bloc for the supply of COVID-19 vaccines and asked a Belgian court to impose a large fine on the company.

The EU took the Anglo-Swedish firm to court in April after the drugmaker said it would aim to deliver only 100 million doses of its vaccine by the end of June, instead of the 300 million foreseen in the supply contract.

Brussels wants the company to deliver at least 120 million vaccines by the end of June. AstraZeneca had delivered 50 million doses at the beginning of May, one-fourth of the 200 million vaccines foreseen in the contract by then.

"AstraZeneca did not even try to respect the contract," the EU's lawyer, Rafael Jafferali, told a Brussels court in the first hearing on the substance of the legal case.

He said the EU was seeking 10 euros ($12.2) for each day of delay for each dose as compensation for AstraZeneca's non-compliance with the EU contract. This penalty would apply from July 1, 2021, if the judge accepted it.

The EU lawyer saidthe EU was seeking an additional penalty of at least 10 million euros for each breach of the contract that the judge may decide.

A verdict is expected next month.

NOT A CONTRACT FOR SHOES

"This is not a contract for the delivery of shoes or T-shirts," AstraZeneca's lawyer Hakim Boularbah told the court later on Wednesday, stressing the complexity of manufacturing a new vaccine.

The company has repeatedly said the contract was not binding as it only committed to make "best reasonable efforts" in delivering doses. AstraZeneca's lawyer told the judge the vaccine was sold at cost.

Jafferali said that principle had not been respected because the drugmaker had not delivered to the bloc 50 million doses produced in factories that are listed in the contract as suppliers to the EU, of which 39 million doses manufactured in Britain, 10 million produced in the United States and 1 million in the Netherlands.

The lawyer said these doses were "diverted" to other clients.

The company has said that doses produced in Britain were reserved under a contract the British government signed with the University of Oxford, which developed the vaccine.

Jafferali said AstraZeneca had pledged in the EU contract not to have other engagements that would prevent it from abiding by the terms of the deal.

The lawyer also said AstraZeneca had failed to communicate to the EU in a timely manner the magnitude of its supply problems because it repeatedly sent messages, including publicly, that it was able to meet its targets, before finally admitting there were large shortfalls in March.

The company had warned the EU in December of production problems, but communicated only at the end of January, just before the start of deliveries, a much larger cut than initially expected for the first-quarter.