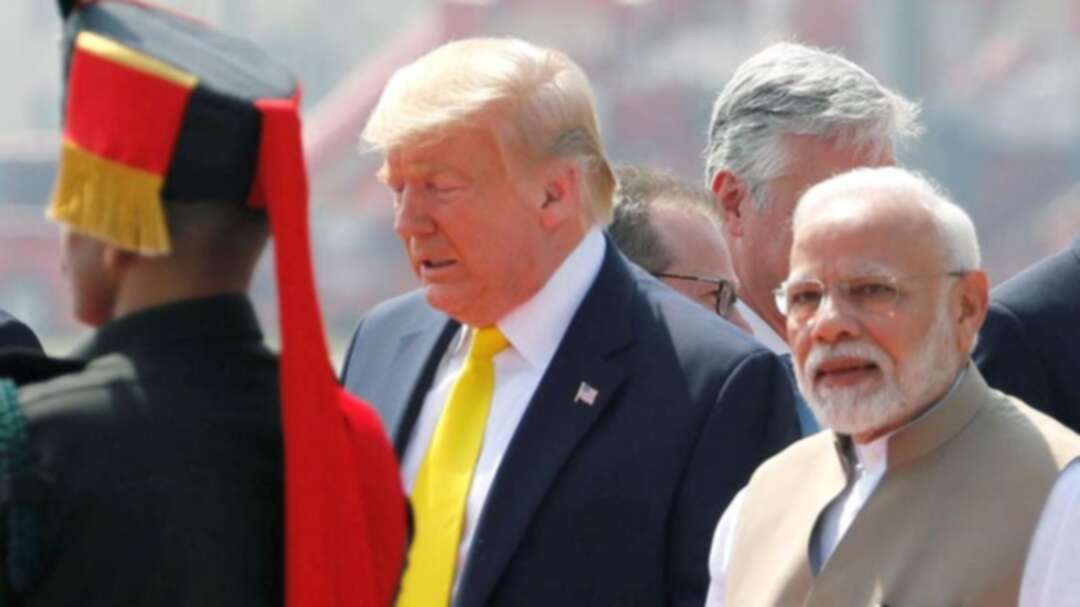 US President Donald Trump landed in the western Indian city of Ahmedabad on Monday at the start of a visit during which the two sides will aim to reset relations that have been buffeted by a trade spat.

India and the United States have built close political and security ties and Trump’s two-day trip is a sign of their converging interests, officials say, including a way to counter China’s rise as a superpower.

Prime Minister Narendra Modi was at the airport to greet Trump and his wife, Melania, as they stepped off Air Force One.

Trump vowed on Monday to boost trade ties between the United States and India and said the US was prepared to supply India with defense equipment ranging from drones to helicopters and missile systems.

We look forward to providing the “best and most feared military equipment” to India, said Trump, while addressing a crowd of more than 100,000 people at a stadium in the western state of Gujarat, shortly after arriving on his maiden visit to the country.

Trump said he looked forward to expanding space cooperation between the two nations and said both sides were at the early stages of reaching an “incredible” trade agreement.

A roadshow is planned and a huge reception will be held in a 110,000-seat cricket stadium in the city which is the political home of Modi. A huge crowd has filled the stadium, claimed to be the world’s biggest cricket ground. 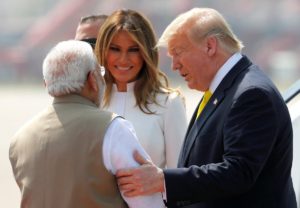 In the stadium, many people were wearing customized white hats saying “Namaste (Greetings) Trump”, while workers handed out thousands of cardboard masks of the US president.

“We are ready to come to India, we are on our way, we will be meeting everyone in a few hours,” Trump tweeted in the Hindi language before he landed.

Modi tweeted in response: “The guest is God”.

Modi, who has built a personal rapport with Trump, is pulling out the stops for Trump’s visit even though a trade deal that Washington was pushing for has run into problems.

The rally in Ahmedabad will be a larger version of the “Howdy Modi” rally that Trump and Modi jointly appeared in Houston to a jubilant crowd of 50,000 Indian Americans last year, where Trump likened Modi to Elvis Presley for his crowd-pulling power. 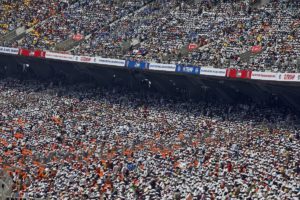 His entourage includes daughter Ivanka and son-in-law Jared Kushner besides members of his cabinet, including Commerce Secretary Wilbur Ross.

Many roads were blocked off in Ahmedabad, shops shut and police stationed on rooftops and balconies. School children boarded buses bound for the stadium shouting “We love Trump.”

Others were carrying Indian flags.

“I have been here since 7 a.m. I don’t know how many I have handed out,” said Durbin Prajapati, a 19-year-old volunteer who was standing on the stadium concourse with a box of two thousand

Trump masks. “We like Trump: he is good for business”