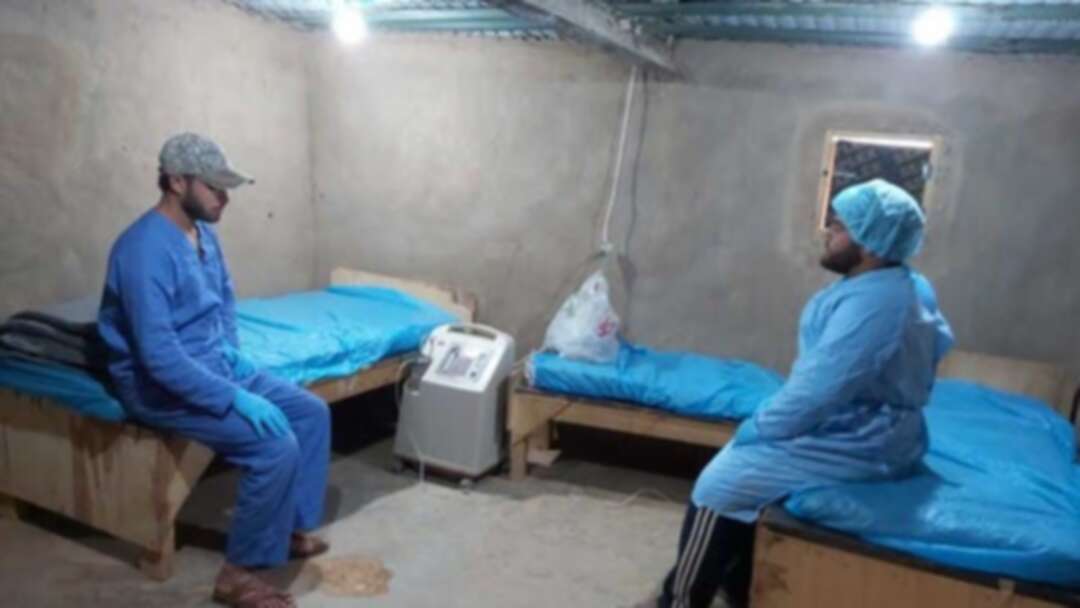 The makeshift clinic in Rukban Camp on the Syria-Jordan border. (Supplied Abu Abdullah)

The isolated camp of Rukban in southeast Syria faces tremendous challenges as it prepares for a potential outbreak of the coronavirus.

In this refugee settlement surrounded by desert, months pass without aid. The last major aid delivery was in February 2019, and residents live off basic food supplies and medical equipment that are smuggled in from regime-held territories.

“There are no doctors or adequately trained medical professionals, only nurses who provide basic care. We do not have the equipment or instruments required to deal with medical emergencies,” said Abu Abdallah, an activist at the camp.

“We need equipment for dealing with patients in a critical situation, like oxygen masks and disinfectants,” added Ruqayya Khashaam, a nurse.

The camp relied on a Unicef-run clinic on the Jordanian border for medical emergencies. But coronavirus precautionary measures caused the clinic to close in March, along with Jordan’s border. “It’s the worst thing that could have happened,” said Khashaam. 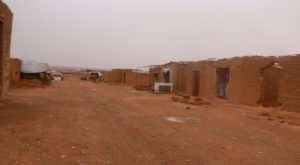 An image of Rukban Camp on the Syria-Jordan border. (Supplied: Mouaz Moustafa)

The UN has described the living conditions of Rukban camp as “abysmal.” Yet for years, the camp’s residents have been caught in a political limbo that obstructs humanitarian aid.

“It’s an extraordinary situation. They have no water, no trees, no source of income or humanitarian aid,” said Bassam Barabandi, of the US-based People Demand Change, which maintains regular contact with Rukban’s activists.

The camp is situated in a 55-kilometer safe zone established by the US in 2016, next to the US army’s Al-Tinf base. It developed as an informal settlement after refugees fleeing regime forces and ISIS were denied entry into Jordan in 2015. At its peak, Rukban sheltered 60,000 internally displaced people, and its population today is estimated to be 10-12,000.

The Syrian regime and its Russian allies have repeatedly blocked aid from entering Rukban, as they push for residents to return to regime-held areas.

Iranian militias controlling the border have blocked all but one of the entry routes for smuggled goods. “The only remaining open road is controlled by the regime. It only allows 20 percent of the needs of the camp to go through, which also inflates the prices,” said Mohammed Ahmed Derbas, the head of a local committee in the camp.

“We are under siege. Even international organizations dealing with health and medical services have no access to us,” said Khashaam.

Also, Damascus and Moscow claim that violent extremist groups are hidden within the camp. The Russian Defense Ministry has accused the US of using Rukban’s refugees as “human shields”, and claims the base is “spewing ISIS mobile groups.”

Due to security concerns, Jordan has increasingly restricted humanitarian aid groups from entering the camp. “Some NGOs used to come in intermittently for periods of 6 to 8 months. Jordan closed its borders to humanitarian organizations coming to Rukban in 2018,” said Derbas.

The US argues that the base’s remit is strictly military, and states that it will not provide humanitarian aid to Rukban. “If we feed them, it will look like we are going to stay there forever, and there may be other options for them,” the US special representative for Syria, James Jeffrey, told The Washington Post in July last year.

The resulting deadlock has led to a steady deterioration of the camp’s sanitation, healthcare, and education. “This desert and barren land that we’re on is unlivable. We do not have the right to go anywhere but back to regime areas, where we will be killed or arrested,” said Derbas.

As coronavirus cases rise in Syria, Rukban’s nurses, activists, and leaders are working to prevent an outbreak. “We’ve sterilized the schools and places of worship. We’ve started awareness campaigns and flyers about the dangers of the coronavirus and its symptoms,” explained Abu Abdallah.

This includes temporarily isolating drivers who smuggle goods into the camp. “We dip their products in chlorine, and we take their temperature before allowing them into the camp. We ask them not to come in direct contact with residents, and we warn residents of their presence.”

For once, the camp’s isolation could help slow an outbreak. “The number of people entering or leaving the camp is negligible,” said Abu Abdallah, “We are almost incarcerated here.”

But those requiring immediate care are left stranded. According to Abu Abdallah, 10 pregnant women in the camp need C-sections: “We contacted Jordanian authorities and the United Nations about these medical emergencies, but we got no response,” he added.

Two nurse-run clinics continue to operate in the camp, but with rudimentary skills and equipment. “There are no surgeons and no environment that is sterile enough for surgery. We cannot save the mother or the child,” said Khashaam, the nurse.

Last week, emergency C-sections were given by medical officers at the US’s Al-Tanf base. “The operation saved the woman’s life and the life of her newborn baby. They are both in good health,” said Osama, a nurse at the camp, of one of the women. But one woman delivered without surgery. She and her baby are now in critical condition, according to activists.

With the closure of the Unicef clinic, nurses said they were compelled to send urgent medical cases back to Damascus.

But Rukban’s residents do not feel safe going back to regime-held areas, fearing arbitrary detention and torture. “The women tell us that they face death either way, by delivering in the camp, or going back to the regime,” said Khashaam.

The fate of tens of thousands of residents who returned to regime-controlled areas in 2019 is unknown. “We don’t know what happened to those who went back. Some of them went to Idlib,” said Barabandi.

The US-based Syrian Emergency Task Force (SETF) identified 175 residents who were arbitrarily detained in October 2019 after they departed from Rukban. “The repatriation should not be viewed as an achievement. It highlights just how bad the conditions were in the camp,” said Mouaz Moustafa, its director. 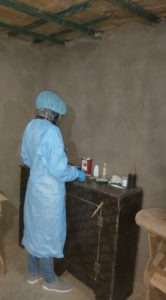 A nurse looks over a small supply of medicine in the camp. (Supplied: Abu Abdullah)

The closure of the Unicef clinic raises questions about who should be taking care of the camp and its residents.

“A Unicef clinic should never close. It should always be open because it gives help to anyone. No country should ever put pressure on Unicef to close,” said Khashaam.

With so many obstacles towards getting aid, some argue that help from the US military may be Rukban’s only hope. “It’s a policy decision at this point,” said Moustafa. “The US can declare that they are unable to provide aid