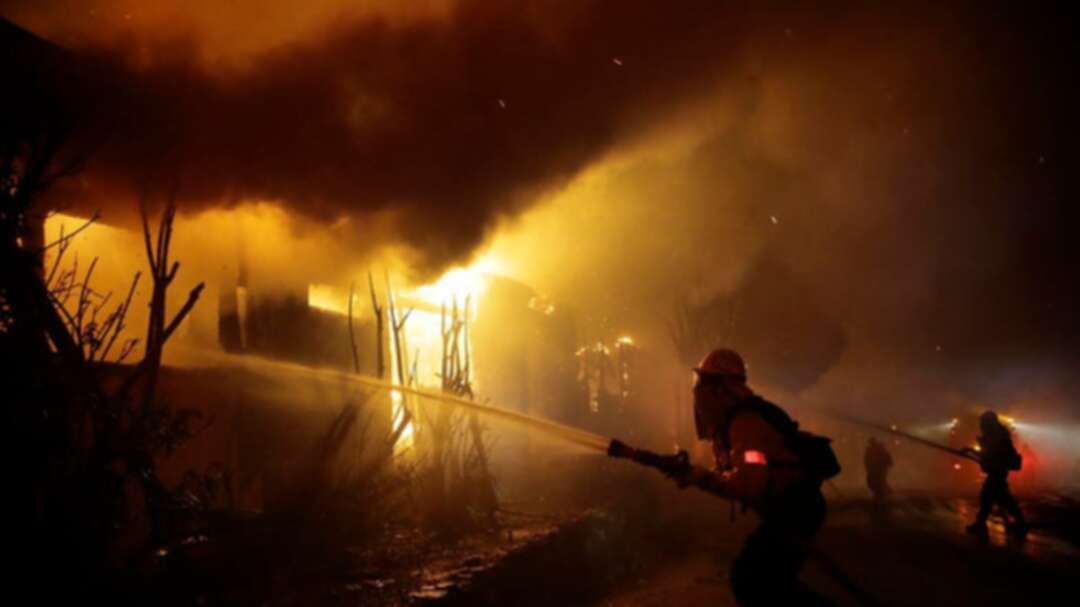 California braced on Tuesday for the most powerful winds this season that threaten to spread destructive fires raging in the state and could spark new blazes. (AP)

California braced on Tuesday for the most powerful winds this season that threaten to spread destructive fires raging in the state and could spark new blazes.

Thousands of firefighters were racing against the clock to gain control of two major fires – the Kincade Fire in northern California and the Getty Fire, west of Los Angeles.

The National Weather Service issued an extreme red flag warning indicating a high risk of wildfires for southern California, with gusts of up to 80 miles per hour (130 kilometers per hour) expected in the Santa Monica and Los Angeles County mountains.

“This Santa Ana wind event will likely be the strongest we have seen so far this season,” the weather service said, referring to winds that kick up in southern California every year.

The windstorms are expected to peak at 3:00 am (10:00 GMT) Wednesday and continue through Thursday.

“It does take one ember, just one ember downwind, to start another brush fire,” Los Angeles Fire Department Chief Ralph Terrazas warned during a press conference.

“Embers have been known to travel several miles, so we are very concerned about tonight’s wind event,” he added.

The Getty Fire, which began near the famous Getty Center museum, erupted early Monday and by Tuesday afternoon had burned 656 acres (265 hectares) and was 15 percent contained.

Authorities said it was caused by a tree branch that fell on power lines.

Celebrities, including Los Angeles Lakers star LeBron James, who was forced to evacuate because of the flames, have pitched in to help crews battling the fires.

The basketball great sent a taco truck to feed firefighters in Los Angeles, Garcetti said in a tweet.

John Cena, the wrestler-turned-actor, also tweeted a video pledging to donate $500,000 to firefighters.

Further north in Sonoma County, the winds picked up Tuesday afternoon as more than 4,000 firefighters battled to contain the Kincade Fire that has raged since last Wednesday, prompting massive evacuations and power outages.

Authorities warned people in the region to be prepared for further evacuations over fears the strong winds – set to last through Wednesday – could fan the flames that have already scorched more than 75,000 acres, an area more than twice the size of the city of San Francisco.

More than 120 structures have been destroyed by the blaze, which was at 15 percent containment by Tuesday afternoon, according to Cal Fire, the state firefighting agency.

The critical weather warnings came just days after Governor Gavin Newsom declared a statewide emergency because of the fires.

California’s largest utility, Pacific Gas and Electric (PG&E), has been imposing rolling blackouts in the northern and central parts of the state that have affected millions of people in a bid to reduce the risk of fire.

The company, which said that one of its transmission lines had malfunctioned near the origin of the Kincade Fire, announced on Tuesday that it was cutting power to nearly 600,000 customers as a precaution.

The outages – the fourth massive round of blackouts in the region in less than a month – have been met with anger by customers as well as Newsom, who called them unacceptable.

Authorities on Tuesday allowed some residents affected by the Kincade Fire to return home but other areas remained under mandatory evacuation.

Dozens of other fires have broken out throughout the state in recent days, fed by strong winds, low humidity and high temperatures.

The wildfires come as California is still reeling from the aftermath of the most destructive wildfire in state history – the Camp Fire, which destroyed the town of Paradise and killed 86 people last year.

Similar blazes in northern California, including in the Napa and Sonoma wine regions, killed 44 people in 2017 and destroyed thousands of structures.

Fire authorities determined that PG&E transmission lines caused the Camp Fire. The utility, which filed for bankruptcy earlier this year, has been held responsible for a number of other wildfires in recent years.