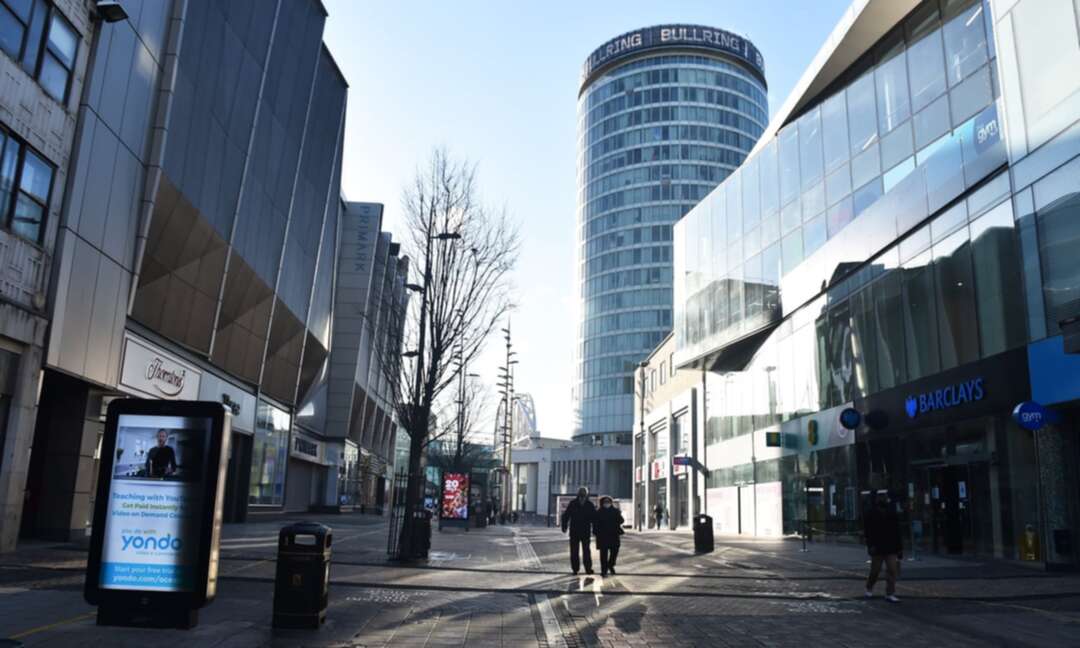 A deserted Bull Ring shopping centre in Birmingham during the third nationwide lockdown.

Race hots up as rivals spell out vision for region, one of the worst affected by the pandemic in the UK

The people of the West Midlands have been hit by the coronavirus pandemic worse than most – the region suffered the biggest fall in GDP during the first wave, has some of the highest unemployment rates in the UK after the loss of more than 100,000 jobs, and the third highest Covid death rate in England – despite Birmingham being Europe’s youngest major city with almost 40% of its population under 25.

As he launched his campaign for reelection, the Conservative mayor, Andy Street, said progress in the region had been “knocked for six” by the pandemic and undone much of the work to rejuvenate the economy in his first three years in office.

He is optimistic the area can quickly bounce back with his plans to win back jobs lost to Covid within two years and say his track record shows he knows how to attract investment; “We were actually doing levelling up here before the phrase was even invented,” he said, adding that he has brought in £3.3bn investment to the region since his election in 2017.

His Labour rival, Liam Byrne, who is MP for for Birmingham Hodge Hill, said the region did not get its fair share in the government’s budget this month and needs a stronger advocacy.

“We have been the region that’s been hardest hit by Covid and all we got was £2 per person per week. We were the only region that didn’t get awarded a freeport, we only got three-quarters of the towns fund money that went to the north-west and crucially, we didn’t get the critical investment we need in the electric vehicle industry,” he said.Byrne’s campaign is geared around positioning the West Midlands county, which includes Coventry and Wolverhampton, at the forefront of the green industrial revolution and becoming the first zero carbon region, promising “the greenest manifesto that any Labour politician has ever run on”.

“We want to become the green workshop of the world, we need to be the place that invents and makes the technologies that the world needs to cut carbon and save the planet. It could be a real way to transform life chances for people,” he said.

Byrne is also focused on improving the quality of life for young people, particularly after youth unemployment in the region soared to 20% during the pandemic.

The election in May is predicted to be another tightly fought contest. Street took victory by a margin of just 3,766 votes in 2017, a shock result in what was considered a Labour heartland.

Other candidates in the running include the Green party’s Steve Caudwell, a Solihull councillor who has worked for Jaguar Land Rover and Airbus, Jenny Wilkinson of the Liberal Democrats, who has previously run for MP in Sutton Coldfield, and the independent candidate Ashvir Sangha, who focusing on youth and diversity.

The election will also be the first test of whether Labour can win back votes in the former strongholds it lost in the 2019 general election.

Byrne is optimistic, although admits on a national level Labour is struggling to entice voters with a vision for the future, saying: “We have tried to blaze a trail in the West Midlands by making the story about the choices we have about the future. That’s what Labour nationally needs to do a sharper job with.”

Byrne will have his work cut out with May’s election coinciding with the country emerging from lockdown after a momentous vaccine drive and taking on Street, a former managing director of John Lewis, who is popular for his business background.

A reserved and private figure, Street has not made headlines over the course of the pandemic in the same way other mayors have – although he did call out the government for failing to communicate with leaders over local lockdown measures.

In contrast, Byrne sees himself as becoming an outspoken, Andy Burnham-type figure for the county if he wins. “People in the West Midlands can name Andy Burnham and they can name Sadiq Khan, but they can’t name their own mayor,” he said. “Lots of people in the Midlands feel we now risk being overlooked.”

Byrne has had a long career in politics, holding senior positions in government under Tony Blair and Gordon Brown and admits he has had some “ups and downs” over the years and is “humble enough to admit mistakes”. In 2010, he infamously left a note in the Treasury for his Liberal Democrat successor saying: “I’m afraid there is no money.”

During his time as immigration minister from 2006-2008 he controversially applied retrospective visa rules to skilled migrants and also launched a drive to “create a much more hostile environment in this country if you are here illegally”, which eventually led to the hostile environment policy pursued by the Conservatives in later years. Byrne said he was sorry for the “clumsy language” he used at the time but that his policy was the right one – “it was a tragedy that Theresa May then took a concept and deployed it against innocent people”, he said.

As the candidates prepare to launch their manifestos in the coming weeks, the battle for the West Midlands looks set to be tough. “People want us to be a leader again,” said Byrne. “This is no time for us to be a prisoner of our modesty, people want a mayor who’s going to stand up and fight for their region.”

The birthplace of the Industrial Revolution, manufacturing and engineering still dominate the West Midlands economy, and it was predicted the region would be particularly hard hit by Brexit – 40% of regional merchandise exports are to EU destinations.

The West Midlands’ flagship automotive sector is also under strain as it adapts to Brexit, Covid and the shift to electric vehicles, with the creation of a gigafactory in Coventry seen as crucial for securing the future of the industry.

The West Midlands has a huge population of young people, but spending on youth services in the region has been cut 80% over the past decade with dozens of centres closed down, youth unemployment is high and youth violence is on the rise.

A report from West Midlands police in July 2020 found violence in public places, especially involving under-25s, was increasing week on week, and a number of shocking incidents, including the killing of 15-year-old Keon Lincoln in January, have rocked local communities.

Unemployment has soared in the West Midlands with an estimated 160,000 – 180,000 jobs lost since the start of the pandemic and potentially more on the way – Birmingham has the highest number of workers on the job retention scheme in the UK, with an estimated 68,200 workers furloughed at the end of January.

In Birmingham unemployment has risen to over 15%, almost twice the national average and the highest level since 1987 – of the 10 constituencies in the UK with the highest rate of people claiming unemployment-related benefits, five are in the city.

There is hope the HS2 rail project, along with the 2022 Birmingham Commonwealth Games and the Coventry City of Culture programmes this year will help to boost jobs.

Over the past four years, the Midlands has recorded the fastest rise in child poverty in the UK and Birmingham has the highest child poverty rate (41.6%) outside London.

Nearly one in five neighbourhoods in the West Midlands are in the top 10% most deprived in England and the Trussell Trust food bank network delivered 108,395 food parcels from April to September 2020, a 45% increase from the previous year.

With Birmingham city centre’s clean air zone due to come into force in June, there’s growing pressure for better public transport and cycle path provision in the city and the surrounding region.

Street has an extensive metro and rail masterplan showing what the transport network could look like by 2040, but there has been frustrations on the lack of progress over the last few years.