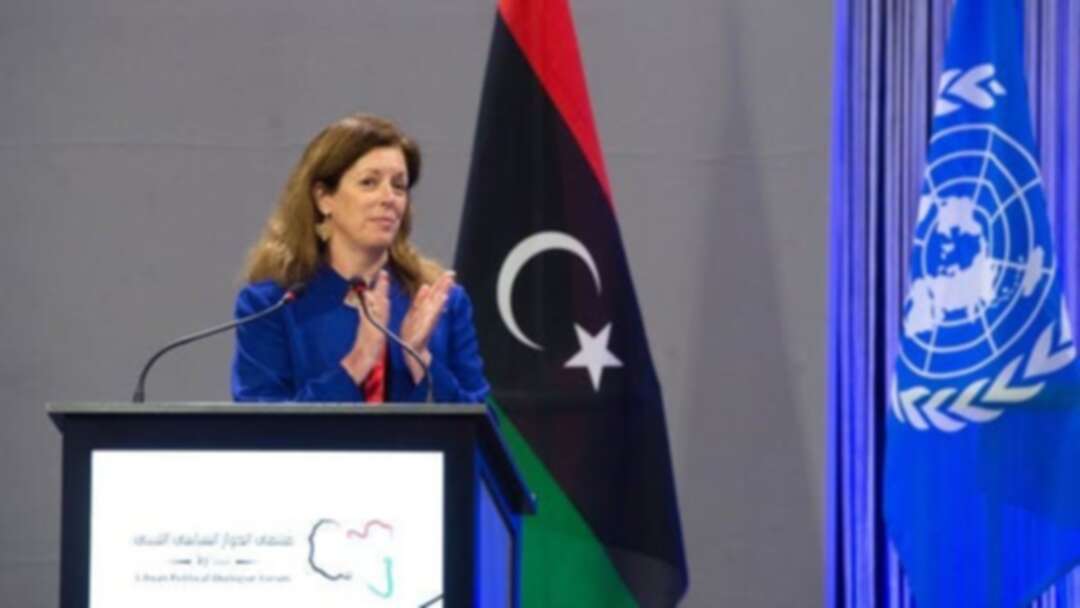 Acting UN envoy for Libya Stephanie Williams delivering remarks at the opening of the Libyan Political Dialogue Forum on February 1, 2021, at an undisclosed location near Geneva to choose a new temporary executive to lead the war-scarred country through a transition until scheduled December elections. (AFP)

Delegates from Libya’s opposing sides kick off a five-day meeting on Monday to choose an interim prime minister and a three-person presidency council, in a crucial bid to reunite the troubled oil-rich country before an election in December.

The Libyan Political Dialogue Forum, including envoys from around Libya, meets under UN mediation in an undisclosed site outside Geneva in hopes of stabilizing a largely lawless country since Muammar Gaddafi’s fall and killing in 2011.

The gathering, which will draw from an agreed list of candidates, caps a process begun in Berlin in January 2020 for a North African country mired in international meddling and pockets of violence despite a holding cease-fire.

The voting process take place under the mediation of the UN secretary-general’s acting special representative for Libya, Stephanie Williams. The interim authority to be chosen will seek to rebuild state institutions and lead Libya to a national election on December 24.

The warring factions also agreed that a national referendum would be held on constitutional arrangements, laying the legal groundwork for the December vote. 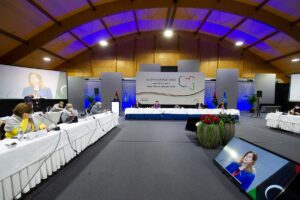 Delegates listening the speech by Acting UN envoy for Libya Stephanie Williams at the opening of the Libyan Political Dialogue Forum on February 1, 2021, at an undisclosed location near Geneva to choose a new temporary executive to lead the war-scarred country through a transition until scheduled December elections. (AFP)

The 75-member forum represents the three main regions of old Libya, Tripolitania in the west, Cyrenaica in the east, and Fezzan in the southwestern part of Libya — each to be represented on the three-member presidential council. The prime minister is to be chosen by garnering 70 percent of votes.

Twenty-four candidates are running for the presidential council posts.

Those include Aguila Saleh, speaker of the east-based House of Representatives, Khaled al-Meshri, the head of the Tripoli-based government’s Supreme Council of State.

Among the candidates for the presidential council is Libya’s top judge Mohammed al-Hafi, whose candidacy has stirred up controversy. The country’s Judges’ Association decried the move, saying on Saturday he should have retired before running.

Twenty-one candidates are running for prime minister, including Fathi Bashaga, the powerful interior minister in Tripoli, and Ahmed Meitig, deputy prime minister of the Government of National Accord (GNA).

On Thursday, Williams told the UN Security Council that the gathering amounted to “a decisive round of intra-Libyan talks.”

The same day, the United States called for a halt to foreign military interventions in the country, as has been sought under the cease-fire agreement that has largely held in recent months.

The cease-fire deal, inked in October, included the departure of foreign forces and mercenaries from Libya within three months. But so far, no progress has been made on that.

Williams said in December there were at least 20,000 foreign fighters and mercenaries in Libya, and warned about a “serious crisis” as weapons continue to pour into the North African country.

Since the 2011 NATO-backed uprising ousted Gaddafi, Libya has been in turmoil and split between rival administrations in the east and west — each backed by an array of militias and foreign powers.

Turkey is the main patron of the government in Tripoli, the capital, while Egypt, Russia and UAE back the forces of military commander Khalifa Haftar — who runs most of the east and south.

UN Secretary-General Antonio Guterres has said Libyans are making a “remarkable effort to come together” and said it’s crucial for foreign forces to withdraw.