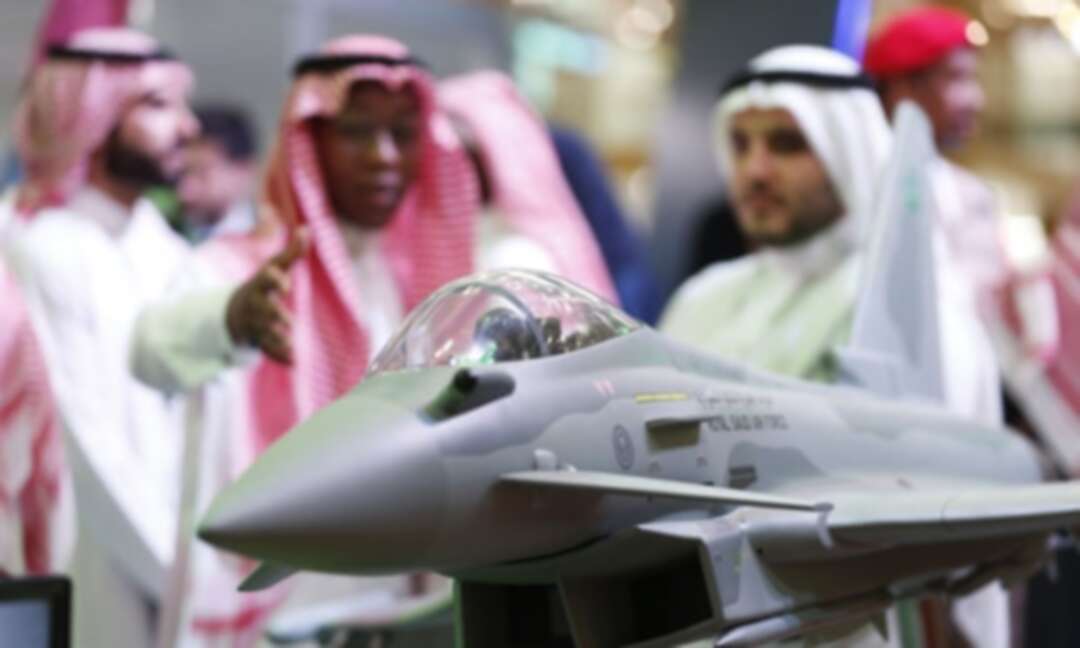 A model of a Saudi air force Eurofighter Typhoon jet, manufactured by BAE System, at a Riyadh exhibition.

Over the last four years, the Gulf state has been accused of bombing and killing Yemeni civilians

Britain spent £2.4m over the last four years to help Saudi Arabia’s military comply with international humanitarian law – during which time the Gulf state has been accused of indiscriminately bombing and killing Yemeni civilians.

The figures – obtained via parliamentary questions – are the first time the UK has detailed the amount spent via secretive funds to the kingdom, prompting a campaign group to say British taxpayers were backing the country’s military.

Two months later, in response to a follow-up question from SNP MP Martyn Day, James Heappey a defence minster, revealed in a letter that the moneys involved amounted to £2.4m since 2016, including £550,000 in 2019-20.

The campaign group which helped uncover the figures said the revelation embroiled the UK in “the world’s worst humanitarian crisis” where thousands of civilians have been killed since the civil war in Yemen began in March 2015, largely from indiscriminate bombing by a Saudi-led coalition, supplied by western arms makers.

Sayed Ahmed Alwadaei, the director of the Bahrain Institute for Rights and Democracy (Bird), added: “It is deeply disturbing that the UK government is spending taxpayers’ money bolstering the Saudi’s military capacity.”

The kingdom’s air force is accused of being responsible for many of the estimated 8,750 civilian deaths in airstrikes, and – while the raids have slowed during 2020 because of the coronavirus pandemic – the attacks have continued, according to the Yemen Data Project.

Last July, at least seven children and two women were believed to have been killed in a suspected Saudi-led coalition airstrike in north-west Yemen, according to the UN’s humanitarian coordinator, Lise Grande.

But what has been less apparent is the closeness of the UK-Saudi air force relationship behind the scenes.

A former Conservative defence minister has previously told the Guardian when there had been accusations of civilian casualties following bombing in Yemen, British ministers would ask their Saudi counterparts what had happened.

At the same time, other ministers have signed off sales of arms to Riyadh, including Boris Johnson, when he was foreign secretary. Johnson approved the sale of Paveway guided missiles in August 2016, a few days after an airstrike on a potato factory in the country had killed 14 civilians.

In 2019, the court of appeal halted the sales of UK arms to Saudi Arabia, arguing that ministers had not properly assessed the risk of civilian casualties from the bombing. But last summer, Liz Truss, the trade secretary, restarted arms sales after concluding there had been only “isolated incidents” of breaches of humanitarian law.

The money to support the Saudi military comes principally via the secretive Integrated Activity Fund, now renamed the Gulf Strategy Fund, a pool for money which the UK spends on the six cash-rich Gulf states. Its budget was £20m a year until the coronavirus crisis forced a sudden cut to £8.4m.

Ministers had until recently refused to disclose how the fund’s cash was spent, citing national security exemptions, amid accusations that it may be linked to serious human rights abuses. But in the last year there have been signs of greater transparency.

Last October, Cleverly told a Westminster Hall debate that the UK was confident “that we are having a significant positive impact on human rights in the region” because of the activity of the Gulf Strategy Fund, and promised its governance had been strengthened and that a summary of its work would be published.

The UK has long enjoyed a close military and strategic relationship with Saudi Arabia, providing arms via BAE Systems, generating £2.5bn to £3bn a year for the British company.

It also supplies direct military services, and has previously disclosed that 17 service personnel are embedded within the kingdom’s military, including three in its air operations centre.

But Day, the SNP MP for Linlithgow and East Falkirk, said the UK was “not content with merely profiting from arming Saudi Arabia’s brutal war on Yemen”.

He added: “I am shocked to find that the UK government has also covertly funnelled millions of pounds through secretive funds to train the Saudi armed forces.”