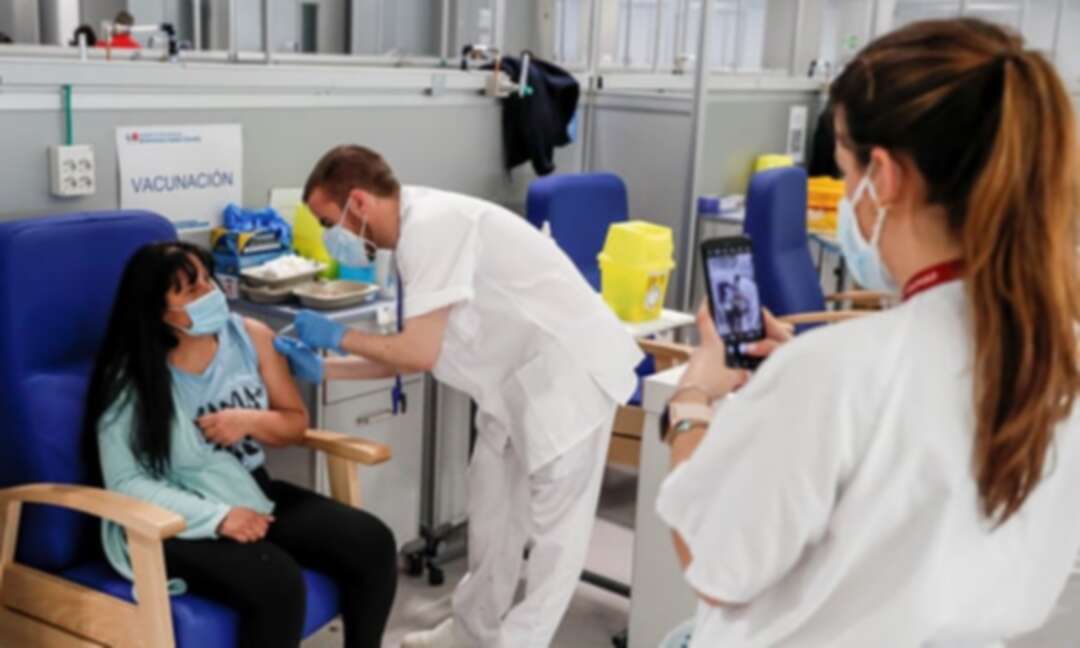 A health worker administers a dose of the AstraZeneca vaccine at Isabel Zendal hospital in Madrid.

Tussles with the EU over vaccine supplies could continue for months, UK government insiders fear, despite a joint statement in which both sides committed to working together.

From Boris Johnson’s phone calls to EU leaders to the foreign secretary Dominic Raab’s discreet lobbying on the fringes of this week’s Nato meeting, a significant amount of senior government time and energy is being invested in trying to resolve the issue.

The public mood music is soothing – the joint statement issued on Wednesday pointed to the need for a “win-win” solution for both sides – but privately there is simmering fury.

The government was particularly incensed by press reports that 30m doses of the AstraZeneca vaccine in an Italian warehouse raided by police were earmarked for the UK. The company insisted they were destined for developing countries or the EU itself.

One government source suggested there was a move to “whip up an anti-AstraZeneca mob,” treating the firm as a scapegoat for politicians’ failings.

The health secretary, Matt Hancock, made his frustration clear on Wednesday. Asked about comments from the EU internal markets commissioner, Thierry Breton, that the UK was engaging in “vaccine nationalism,” he told the Financial Times bluntly: “Our contract trumps theirs. It’s called contract law. It’s very straightforward.”

Johnson perhaps also let slip his true feelings when he told his MPs earlier in the week it was greed that had ensured the vaccine was developed and rolled out so rapidly in the UK.

In public, however, the language from London has been largely diplomatic because of fears about the potential consequences if the EU decides to choke off supplies. Covid vaccine

In fact, neither side has received as many doses as they had initially hoped. AstraZeneca had suggested it could supply 30m to the UK by September 2020, for example, more than the entire number of Pfizer and AstraZeneca jabs so far administered to the public, six months later.

The startling success of the UK’s rollout means there have been few quibbles from the government, but EU leaders have found themselves having to explain why their vaccination programmes got off to a faltering start at the same time as tackling a third wave of the virus.With a booster jab potentially necessary in the autumn and supply chains strung out across national borders, however, ministers are acutely aware that they will need to reach some kind of agreement with the EU when discussions resume after this week’s European council meetings. “It’s an ongoing problem. It could go on for months,” said one government insider.

There is less angst in Downing Street about the holdup of supplies from India, and more sympathy for Delhi’s situation. Johnson’s former chief of staff and trusted fixer Lord Lister has been dispatched, in part to pave the way for the prime minister’s planned trip to India next month but also to try to unlock 5m doses the government had expected to receive.

They were part of a 10m-dose order, half of which had already been sent before the Indian government in Delhi decided to prioritise domestic supply as cases surged. The UK believes the release of the remaining 5m doses is a matter of when, not if.

Whitehall officials stress that the government’s plans for unlocking the economy will remain on track even if vaccine supply is bumpy in the weeks ahead. They are based on all over-50s being vaccinated by mid-April, a target they are still confident can be met.

The government is also looking at ways of bolstering domestic production and eagerly awaiting the arrival of the US-made Moderna vaccine, which is expected some time next month. Covid vaccine