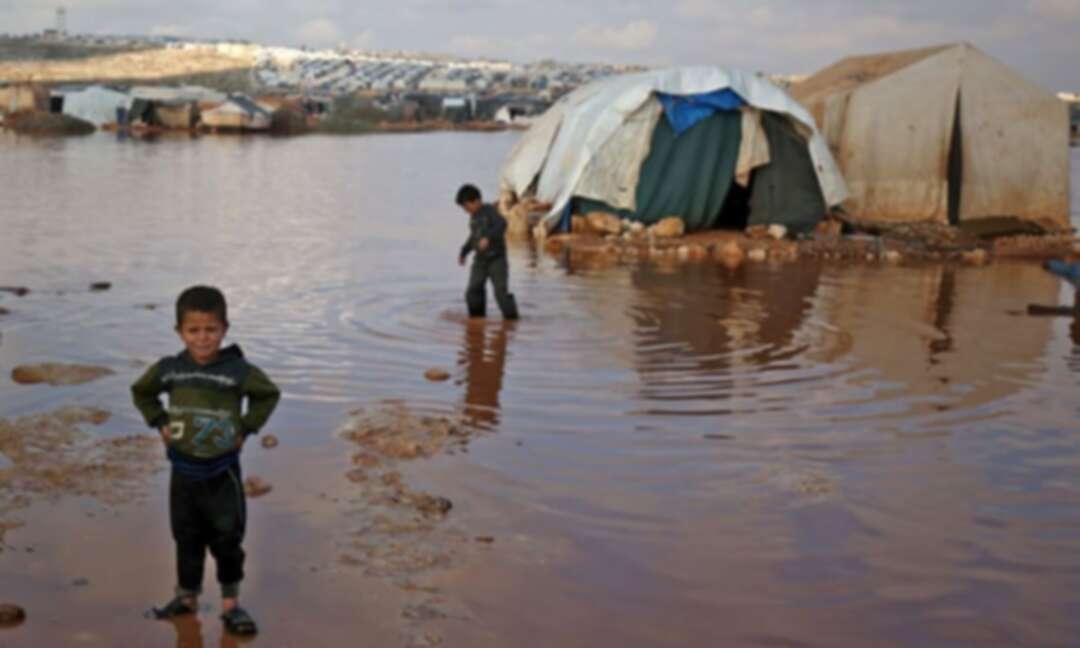 Children play among flooded tents at a camp for displaced Syrians near the town of Kafr Lusin in Idlib.

The UN has urged the UK not to go ahead with expected significant cuts in aid to Syria next week, warning that the move could further destabilise the wartorn country and backfire on Britons.

The warning from the UN’s chief humanitarian coordinator, Mark Lowcock, comes before a high-profile donor conference on Syria at which the organisers are looking for $10bn, the largest ever appeal for Syria.

In a last-minute plea to the UK, Lowcock said: “This is absolutely not the moment for donors to downgrade Syria in their priorities. Millions of Syrians are resorting to desperate measures to survive. To cut aid now would be massively destabilising. It would be a grave step in the wrong direction.”

The money goes to helping refugees in Syria and to help with the education, housing and employment of refugees across its borders in Turkey, Lebanon and Jordan. The UK is said to be the only major donor that is threatening to make a large cut.

“A decision to turn away from Syria today will come back to bite us all tomorrow,” he said. “In 2014 our appeal was poorly funded. In 2015 there was a huge exodus of people from Syria to Europe.”

Senior UN officials have been briefed to expect a “significant cut” in UK aid. The UK provided £300m last year and says it gave a total of £3.5bn between February 2012 and December 2020.

Lowcock told the Guardian that the UK should remember its historical responsibilities to Syria. He said: “On Tuesday in Brussels we are asking donors – out of generosity and in their own interests – to stay the course and continue supporting the people of Syria. Particularly those like the UK who have played a prominent role at points in the past. UN official

“In 2016 the UK hosted the most successful conference for a response crisis the UN has ever organised, raising $12bn. This helped keep the situation contained. This approach was good for Syrians, good for British people and good for the world. It helped ease suffering, contained chaos and instability, and ultimately protected the British people.”

Research for the UN shows nine out of 10 people in Syria live below the poverty line. The Syrian pound is worth only 1% of its prewar value, making it impossible for many Syrians to cover essential costs. Food prices have gone up by more than 200%. Lowcock said: “The majority of people can’t afford to eat. Millions of Syrians are resorting to desperate measures to survive.”

Earlier this year the UK cut its aid to Yemen by more than 60%, and it is trying to cuts its aid programme by a third over two years, citing the Covid-induced decline in the economy. But it is also cutting its aid budget to the equivalent of 0.5% of gross national income, down from the legally required 0.7%.

The UN says more than $10bn is needed this year to fully support Syrians in need. This includes at least $4.2bn for the response in Syria and $5.8bn to support refugees and host communities in the region.

An estimated 13.4 million people need humanitarian assistance in Syria, up 20% on last year. In the surrounding region, the UN and partners aim to help 10.5 million people, including 5.6 million refugees and the communities that host them. UN official