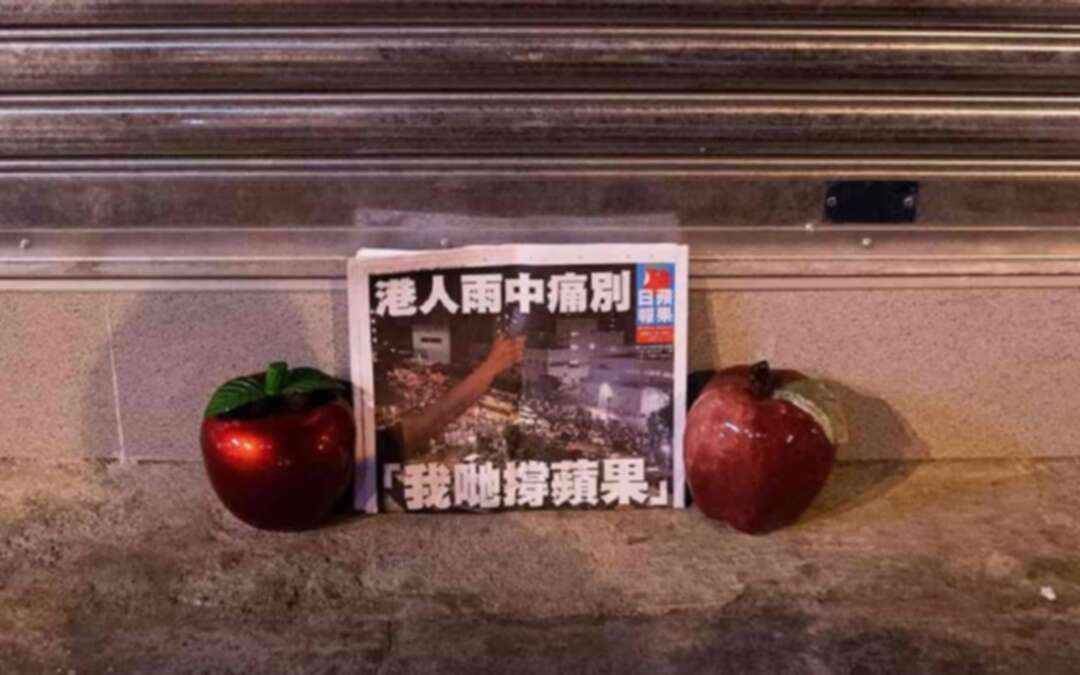 the death of free speech in hong kong

The Hong Kong newspaper Apple Daily has been forced to close.  It was doomed since last year, when China’s Communist government imposed a harsh National Security Law on Hong Kong. Police

We For News reported that on the day it was shuttered, people queued to buy one last copy; a million were printed.

The paper offices were raided by the police. Its journalists were threatened with violence. Its assets were frozen. Salaries could no longer be paid. Senior editors and a chief columnist were arrested.

The paper’s alleged crime was “collusion with foreign powers,” or as the former Chief Executive of Hong Kong, C.Y. Leung, crassly put it, “collusion with scum from foreign countries.” Its real crime was its highly critical coverage of the Communist Party of China, of the Hong Kong government, and of corrupt local tycoons and politicians ever since Jimmy Lai founded the paper in 1995. Police

Lai himself has already been in prison for almost a year, charged with fraud, collusion with foreign countries, and taking part in unlawful demonstrations. He could in theory be locked up for life.

Neither Lai, nor his paper, fit the high-minded ideal of progressive activism. Apple Daily is partly a sensationalist tabloid full of stories about the sexual transgressions of movie stars and other local celebrities, salacious gossip, and general muckraking. In most liberal democracies, such publications are usually seen as the unfortunate price to be paid for the right to free speech. The British tabloid press, for example, is hardly progressive, high-minded, or principled.

But Apple Daily was principled in its way. True, the paper’s tone was populist and not always civil. People from mainland China arriving in Hong Kong to share in its riches were once compared to “locusts.” But Apple Daily also offered some of Asia’s sharpest political reporting and was often the only publication in Hong Kong that regularly exposed and analyzed financial or political wrongdoing.

Lai is a fascinating and complicated figure. An avowed admirer of Donald Trump and a devout Catholic convert, he holds rather strident views on the superiority of Western Christian civilization over what he sees as the tyrannical nature of Chinese civilization. This opinion is not uncommon among Christian Chinese political activists, but it tends to find more backing from the far right in the West than from liberals. Police

Lai is what might be described as a rough diamond. After fleeing China in 1959 at the age of 12, in less than 30 years he worked his way up from being a child laborer in a garment factory to become a textile magnate whose jeans brand, Giordano, sold well all over China and elsewhere in Asia. He became a very rich man.

Everything changed radically for Lai after the savage crackdown on the pro-democracy demonstrations in China in 1989. He had supported the student protesters occupying Tiananmen Square and sent them free T-shirts. When the Chinese authorities sent in troops to crush the protests, killing thousands, Lai became a vocal opponent of the Communist regime. He sold his garment business, which was threatened with closure in China anyway, and started a magazine called Next, and then Apple Daily. “Information to me is freedom,” he said.

Lai wrote articles calling Li Peng, who carried out the savage crackdown in 1989, an “idiot” and “the son of a turtle egg” (a particularly nasty insult among mainland Chinese). Since Li was rumored to have been adopted by Zhou Enlai after his own father was killed – a claim Li has denied – calling his parentage into question was an especially stinging affront. The government denounced Lai as a “traitor,” a “black hand,” a “rotten apple,” and so on, and viewed his support of democratic politicians and activists in Hong Kong, and his efforts to keep the memory of 1989 alive, as dangerously subversive.

It was in fact unusual for a Hong Kong tycoon to defy the Communist government and promote democracy. Most businessmen keep quiet or do their best to please and placate the government in Beijing. Local businesses stopped advertising in Lai’s publications, and pro-China newspapers in Hong Kong published cartoons of Lai as a monstrous beast wrapped in the American flag. Police

Lai faced physical danger as well. His house in Hong Kong was firebombed. He was threatened with machetes, and he was under constant surveillance and followed wherever he went.

Yet he never gave up. Lai turned up every year to commemorate the Tiananmen Square Massacre. He marched in pro-democracy demonstrations. He visited Britain and the United States to elicit support for maintaining Hong Kong’s freedoms. Although he was ridiculed for meeting US Vice President Mike Pence during Trump’s presidency, he went to see the Democratic Speaker of the House Nancy Pelosi, too. And his tabloid, with its peculiar blend of scandal, gossip, and serious political reporting, was Hong Kong’s indispensable voice of free speech.

Now that voice has been silenced, and Lai is in prison with others who tried to protect the right of Hong Kong’s citizens to speak and write freely, to be ruled by law, and to vote for their own autonomous government. Their politics are diverse: Martin Lee is a venerable barrister and moderate liberal democrat, Joshua Wong is a young leftist firebrand, and Lai is a red-baiting, Trump-admiring conservative Christian. Yet they stand together. When freedom is under siege, people cannot afford the narcissism of small differences that is tearing apart liberal politics in countries where people think democracy can be taken for granted. Police