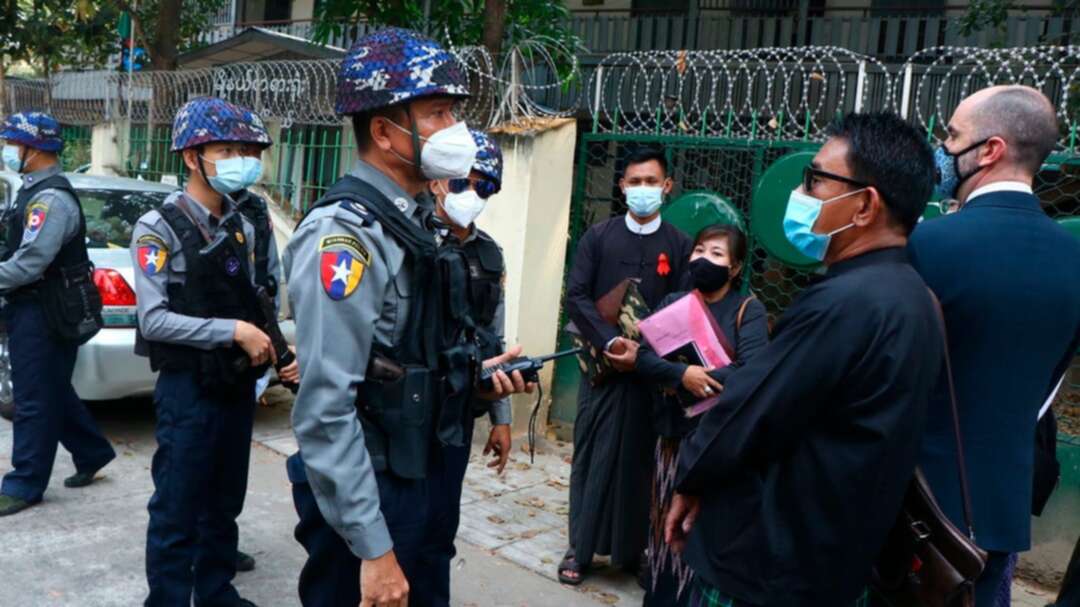 A court in Myanmar on Friday extended the pre-trial detention period for an Associated Press journalist arrested while covering demonstrations against the military’s seizure of power last month. He is facing a charge that could send him to prison for three years.

Thein Zaw, 32, was one of nine media workers taken into custody during a street protest on February 27 in Yangon, the country’s largest city, and has been held without bail. His next hearing at the Kamayut Township court will be on March 24.

The hearing Friday, which Thein Zaw attended via a video teleconference, came at the end of his initial remand period.

Thein Zaw and at least six other members of the media have been charged with violating a public order law, according to his lawyer, Tin Zar Oo, and the independent Assistance Association for Political Prisoners. Separate hearings were held Friday for the other detained journalists.

Tin Zar Oo and one of Thein Zaw’s brothers were allowed into the courtroom to take part in the 10-minute videoconference. Tin Zar Oo said she was able to submit documents giving her power of attorney for the case, but only at the next hearing might be allowed to submit a bail application.

Reporters and a US Embassy official were not allowed into the hearing.

Thein Zaw had not been seen by his lawyer or any of his family members since his arrest. Tin Zar Oo said visits at Insein Prison, where he is being held, are not allowed because of coronavirus concerns, so his family has been dropping off food and supplies for him at the gate.

Tin Zar Oo told The Associated Press that her client looked healthy at Friday’s hearing, but that he suffers from asthma at night. She said Thein Zaw’s brother commented that he had lost weight.

Thein Zaw was arrested as he was photographing police, some of them armed, charging down a street at anti-coup protesters. A video shows that although he stepped to the side of the street to get out of their way, several police rushed over and surrounded him. One put him in a chokehold as he was handcuffed and then taken away.

According to the Assistance Association for Political Prisoners, 38 journalists have been detained since the military ousted the elected government of Aung San Suu Kyi on February 1. Nineteen are still incarcerated.

The group says it has verified the detentions of more than 2,000 people as well as 69 deaths.

In another move against the media, authorities this week canceled the licenses of five local outlets that had extensively covered the protests. Mizzima, Democratic Voice of Burma, Khit Thit Media, Myanmar Now and 7Day News have continued operating despite being barred from broadcasting or publishing on any media platform.

The Associated Press and many press freedom organizations have called for the release of Thein Zaw and the other detained journalists.

“Independent journalists must be allowed to freely and safely report the news without fear of retribution,” Ian Phillips, AP vice president for international news, said after the arrest. “AP decries in the strongest terms the arbitrary detention of Thein Zaw.”

The deputy director of the International Press Institute, Scott Griffen, previously called the charges an “a obvious effort to intimidate Myanmar’s journalists into silence and prevent them from reporting on the junta’s increasingly violent crackdown on the protests against its illegitimate rule.”

The US government, in addition to criticizing the coup and the violence of Myanmar’s security forces, has shown support for the cause of press freedom in the Southeast Asian nation.

“We condemn the attempted media blackout and efforts to silence the voices of the people by revoking the licenses of several local media organizations,” US State Department spokesperson Ned Price told reporters in Washington on Thursday.

“We are deeply concerned about the increasing attacks on the freedom of expression, including for members of the press. We call for the release of journalists and for all others who have been unjustly detained.”

Even during Suu Kyi’s time in office, journalists were often sued for their reporting.

In the highest-profile case, two journalists working for the Reuters news agency were arrested in 2017 while working on a story about military violence directed at Myanmar’s Rohingya minority. They were accused of illegally possessing official documents and sentenced to seven years behind bars before being freed in 2019 in a mass presidential pardon.