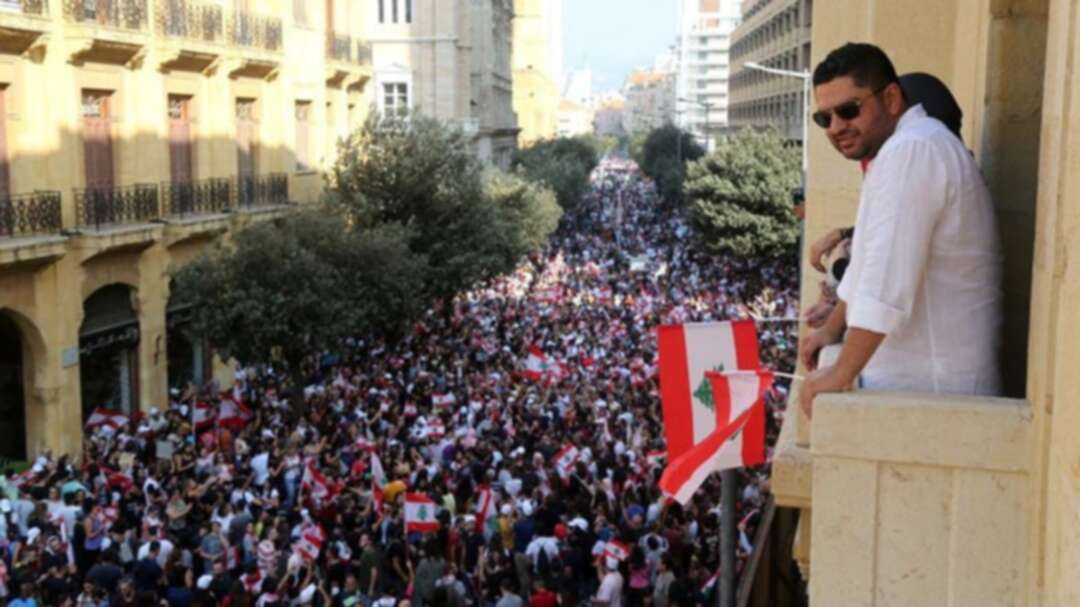 A man holds a Lebanese flag as he stands on a balcony during a protest targeting the government over an economic crisis, in Beirut, Lebanon (Photo Reuters)

Lebanon witnessed more demonstrations Friday in several regions throughout the country protesting against the political situation and the worsening economic crisis that led a number of young men to commit suicide.

Lebanese protesters have blocked Minieh highway in the northern part of the country near Tripoli, according to NNA. The army has been negotiating with the protesters to re-open it after the road closure caused major traffic delays for those heading to Tripoli and others going further north to Minieh and Akkar.

Overnight, protesters, who call themselves “the revolutionary wing of Sidon rising up,” put locks and metal chains on the iron gate of the South Lebanon Water Foundation in the coastal city of Sidon, NNA reported. This was in response to the foundation shutting off water supplies to several buildings and houses in the city due to late payments of outstanding bills.

Workers in the country have been dealing with pay cuts due to the economic crisis in the country. Many private companies have resorted to reducing staff or slashing their pay to deal with rising inflation and liquidity crunch.

For example, Journalist Benjamin Redd announced on Wednesday that workers at the Lebanese news outlet, The Daily Star, “are owed up to a half a year’s salary.” Redd was fired from his job for trying to organize a strike, he said in a tweet. Other journalists at the outlet have resigned or are on strike.

In the southern town of Nabatieh, protesters staged a sit-in in front of the vehicle registration department, for the second day in a row, demanding accountability of public money looters, NNA reported.

They closed the main entrance of the department and only allowed employees to enter while preventing any citizens from entering.

There was a presence of internal security forces following Thursday’s clashes between protesters and those who opposed the department closure and disruption of the interests of the citizens.

Demonstrators have been taking to the streets of Lebanon since October and are fueled by deep resentment for a ruling class seen as mired in corruption, which drove the economy into crisis.