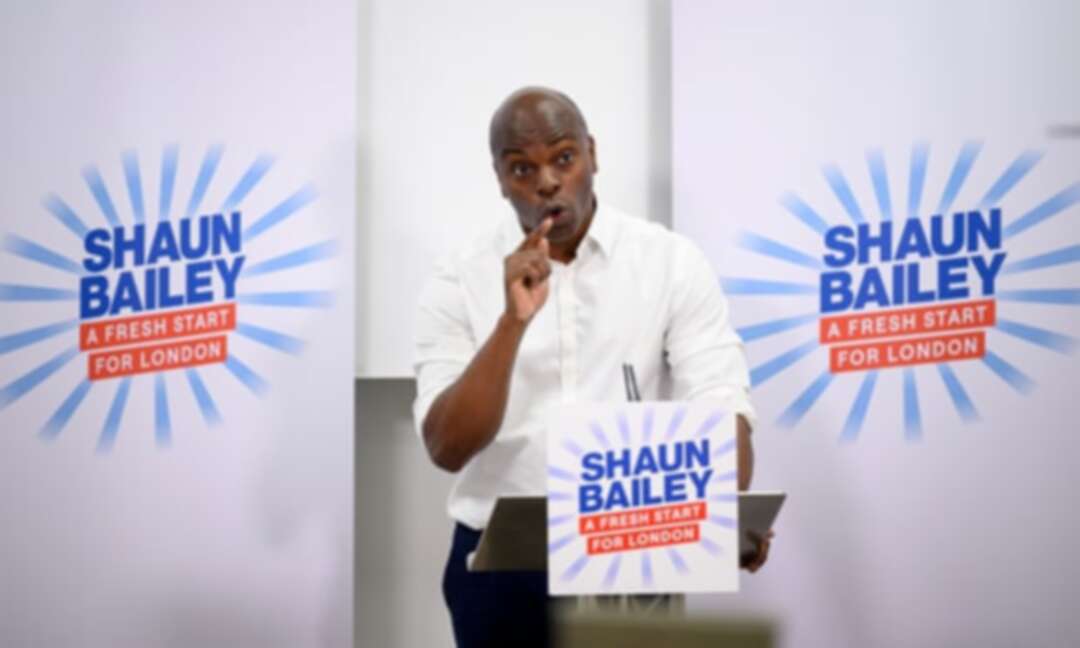 Shaun Bailey’s campaign has denied that it was linked to the Fair Tax Campaign, the group funding the attack ad.

Labour’s deputy leader has called on the Conservative party’s candidate for London mayor to condemn and dissociate himself from “underhand tactics” used by a secretive campaign funding anti-Sadiq Khan adverts online.

Angela Rayner has written to Shaun Bailey asking him to confirm that he had “no interaction or coordination” with the Fair Tax Campaign, which has put out menacing attack ads.

Run by a former aide to Boris Johnson, the group’s ad has attracted the support of Nigel Farage. Labour said it believed the intention of the advert was to rally former Ukip, Brexit party and other rightwing voters into supporting Bailey.

“I am also calling on you to publicly condemn the secretive and underhand tactics used by these ‘campaigns’,” Rayner wrote. “If you fail to do so it will be clear that you welcome this association between rightwing and far-right candidates, organisations and political campaigns.”

In response to the letter, Bailey’s campaign denied it was linked to the group. “Shaun Bailey has no involvement with the Fair Tax Campaign, which is entirely independent of the Shaun Bailey campaign,” a spokesperson said.

The spokesperson accused Labour of being overly concerned about “a small group sharing newspaper articles about Sadiq Khan’s tax rises” and said Labour should ask “whether Sadiq Khan’s tax rises are the problem”, adding: “London needs a fresh start – and it’s not dark or underhanded to point that out.”

The Fair Tax Campaign’s video first appeared on Facebook last month, where the group spent at least £13,730 promoting it. It was also retweeted by Farage before disseminating elsewhere online.

It asks a series of questions about knife crime and transport against the sound of a heartbeat before concluding: “Do you want to use your vote to stop Sadiq Khan ruining our city?” Elsewhere it makes use of the Labour mayor’s middle name, calling him “Sadiq Aman Khan” on a mocked-up ballot paper.

The organisation’s sole director, according to Companies House, is a former Johnson adviser, Alex Crowley, who helped run the Mainstream Network online campaign that called on MPs to “deliver Brexit” on a no-deal basis in 2019. He declined to comment when approached by the Guardian.

Bailey remains far behind in the polls and is trying to force Khan into a second round runoff by ensuring the London mayor gets less than 50% of the vote in the first round.

Groups such as the Fair Tax Campaign, which is campaigning in the mayoral election but not directly acting for a candidate, do not have to register with or report donations to the Electoral Commission, though they are subject to a spending limit of about £30,000.

Crowley has been close to the Conservatives in the past: he was research director and a political director of Johnson’s London mayoral election campaigns in 2008 and 2012. He wrote a book about his early political career. The adviser subsequently worked in Downing Street after Johnson became prime minister but quit in September 2019.

Recent polling from YouGov reported in the Evening Standard has Khan on 47% – down from the 50%-plus levels seen previously. Bailey remains far behind on 26%, with fringe candidates such as Laurence Fox registering 4%.

English universities despair as in-person teaching ruled out before 17 May Climate crisis: Boris Johnson ‘too cosy’ with vested interests to take serious action