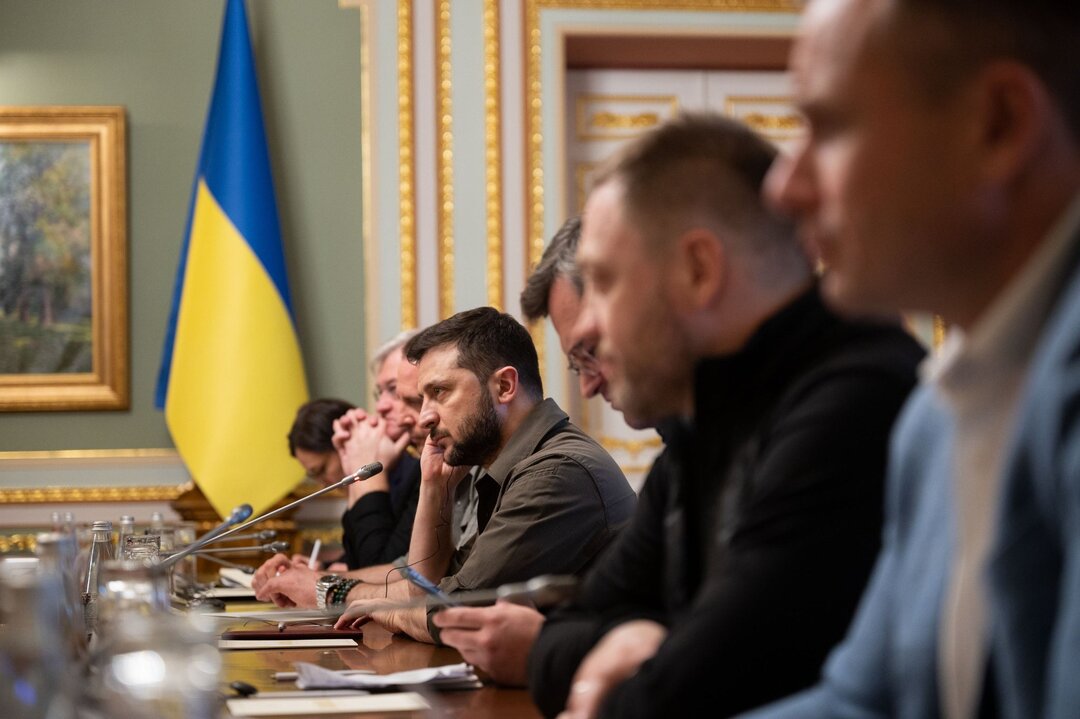 Ukrainian President Volodymyr Zelensky's demand for an international travel ban on all Russians has triggered heavy criticism in Moscow but found support in Baltic countries, the Anews reported, citing Reuters.

He said: "The irrationality of the thought process exceeds every measure."

Zelensky told the Washington Post in an interview published on Monday that "the most important sanctions are to close the borders — because the Russians are taking away someone else's land."

In reply to Zelensky's travel sanctions suggestion, former Russian president Dmitry Medvedev on Tuesday called him "the greatest Ukrainian clown" on Twitter - and even compared him to Nazi dictator Adolf Hitler.

Since the start of Russia's invasion, Medvedev has repeatedly hurled insults at Ukraine, a country he recently suggested may soon not even "exist on the world map."

Moscow frequently justifies its war by saying it is carrying out the the "de-Nazification" of Ukraine, a phrase that causes particular outrage because Zelensky is of Jewish descent.

The Finnish Foreign Ministry raised concerns that Finland is being used as a transit country by some Russian tourists to enter the EU before travelling on to their final destination within the bloc.

Tourist visa for countries that are part of the so-called Schengen area, which is made up of 22 EU countries as well as Iceland, Norway, Switzerland and Lichtenstein, allow tourists to travel freely between the countries.

The Finnish Foreign Ministry is now considering whether to stop issuing new visas to people who have used Finland as a transit hub in the past, according to a report by the Finnish public broadcaster Yle.

"It's not right that at the same time as Russia is waging an aggressive, brutal war of aggression in Europe, Russians can live a normal life, travel in Europe, be tourists," Finnish Prime Minister Sanna Marin told Yle in an interview.

"My personal position is that tourism should be restricted," she added.

Marin said she had discussed the issue of Schengen tourist visas for Russian nationals at summit meeting with other EU leaders before the summer and is expecting more talks.

Finland's call to sanction tourist visas is echoed by EU countries Estonia and Latvia who also share a land border with Russia.

"Stop issuing tourist visas to Russians," Estonian Prime Minister Kaja Kallas wrote on Twitter on Tuesday, adding that travelling to Europa "is a privilege, not a human right."

Kallas stated in her tweet that since air travel from Russia to the European Union was halted following Russia's invasion of Ukraine, EU countries with a land border to Russia "carry the burden" as the "sole access points" to the bloc.

"We will continue making proposals for more severe and efficient sanctions. The time to act is now. The seventh sanctions package is not enough," Reinsalu said in a press statement.

Although the European Commission proposes options to sanction Russia, a spokesperson declined to comment on the calls to restrict visa travel for Russian travellers in the EU on Tuesday.

The spokesperson said in a Brussels press conference: "We are, in principle, ready to scale up the response to Russian illegal actions in and against Ukraine."

EU member states must unanimously agree to impose sanctions on a target.