Hundreds of Iraqis storm US Embassy in Baghdad following airstrikes 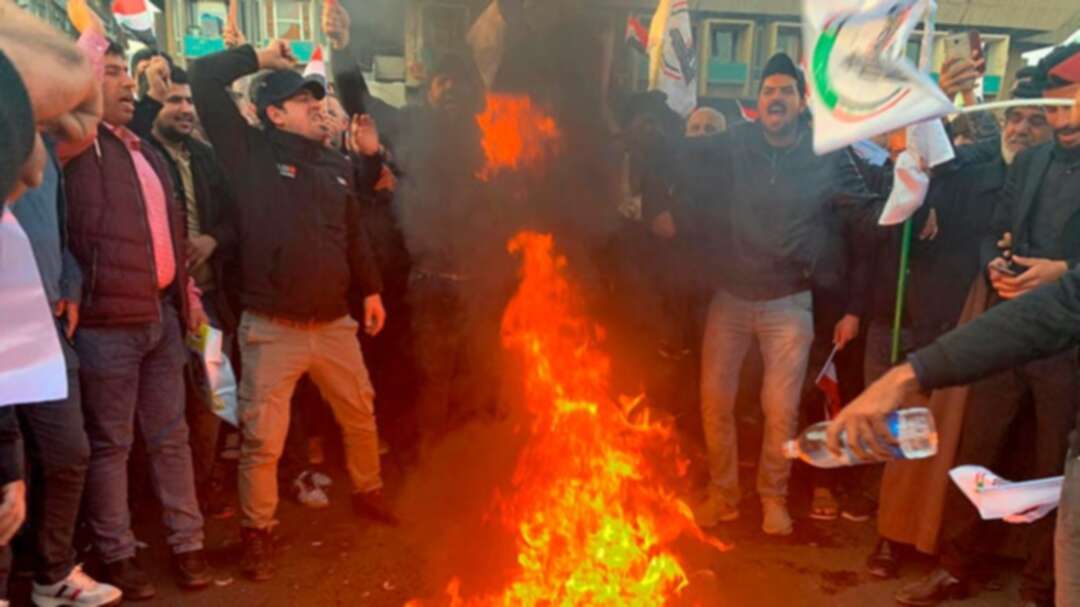 Protesters burn a representation of a US flag during a protest against the American strikes on the Hezbollah Brigades militia, in Baghdad on December 30, 2019. (File photo AP)

Hundreds of angry supporters of an Iraqi Shia militia broke down the US embassy gate door on Tuesday, storming inside the compound as gunshots and sirens rang out.

Only a small amount of teargas was used and militia forces, using loud speakers, urged the crowd to disperse, a Reuters witness said.

The crowd smashed security cameras on the wall around the US Embassy in Baghdad, hurled stones and set up protest tents there, following deadly US airstrikes this week that killed 25 fighters of the Iran-backed militia in Iraq.

Shouting “Down, Down USA!” the crowd tried to push inside the embassy grounds, hurling water bottles and smashing security cameras outside. They raised militia flags and taunted the embassy’s security staff who remained behind the glass windows in the gates’ reception area. They sprayed graffiti on the wall and windows in red in support of the Kataeb Hezbollah militia: “Closed in the name of the resistance.”

No one was immediately reported hurt in the rampage and security staff had withdrawn to inside the embassy earlier, soon after protesters gathered outside.

The American ambassador to Iraq and other staff left Baghdad via the international airport out of security concerns on Tuesday to an unknown destination, according to Al Arabiya sources. One official said a few embassy protection staff remained, according to The Associated Press.

Washington on Monday accused Iraqi authorities of having failed to “protect” US interests, the AFP reported, a day after deadly American air strikes against a pro-Iran group sparked anger.

The US military carried out air strikes on Sunday in Iraq and Syria against the Kataib Hezbollah militia group in response to the killing of a US civilian contractor in a rocket attack on an Iraqi military base.

At least four local Kataib Hezbollah commanders were among the dead, the sources said, adding that one of the strikes had targeted the militia group’s headquarters near the western Qaim district on the border with Syria.

The Pentagon said it had targeted three locations of the Iranian-backed Shiite militia group in Iraq and two in Syria. The locations included weapons storage facilities and command and control locations the group had used to plan and execute attacks on coalition forces, it said.

A US official, speaking on the condition of anonymity, said the strikes were carried out by F-15 fighter jets.