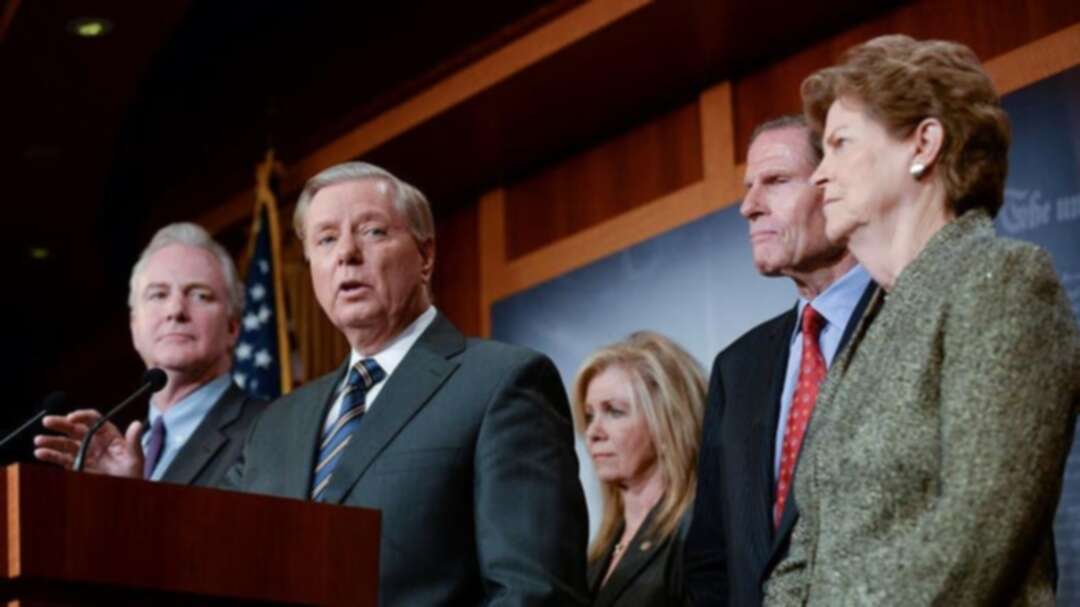 Sen. Graham announces a bipartisan agreement on Turkey sanctions during a news conference in Washington. (Reuters)

US lawmakers kept up their push on Monday to impose sanctions on Turkey if it does not end its offensive in northeastern Syria, and a leading Kurdish politician called on President Donald Trump to stop the “ethnic cleansing” of her people.

“We need to stop the slaughter. We need to ensure that we don’t enable ISIS,” Democratic Senator Chris Van Hollen told a news conference. Lawmakers said they were working to sign more co-sponsors of legislation to impose tough economic penalties on Turkey.

Ilham Ahmed, a Kurdish political leader and president of the Syrian Democratic Council Executive Committee, joined the lawmakers. Speaking through a translator, she called Trump to reverse his decision two weeks ago to remove US forces from Syria, which cleared the way for Turkey’s cross-border offensive.

Trump said on Monday he did not want to leave any American troops in Syria, aside from a small number to secure oil production.

His position has frustrated members of Congress, including several of his fellow Republicans. They consider the withdrawal of troops a betrayal of Kurdish allies who for years have helped the United States fight against ISIS.

Hearings on the situation are scheduled in both the Senate and House of Representatives this week and some congressional leaders expect a vote on legislation within the coming weeks.

“Talk about the oil fields is a cruel distraction from the ongoing humanitarian disaster,” said Democratic Senator Richard Blumenthal, who said he felt “horror and shame” about the Kurds.

Lawmakers also worry that renewed fighting in Syria will lead to the release of captured ISIS extremists.

Van Hollen and Republican Senator Lindsey Graham last Thursday announced legislation that would impose “crippling” sanctions on the government in Ankara and said they would press ahead despite the announcement of a five-day ceasefire.

“I blame Turkey more than anyone. Turkey’s invasion has put at risk the defeat of the caliphate,” Graham said on Monday, referring to territory once held by ISIS.

Graham said he wanted to see a demilitarized zone between Turkey and Kurdish fighters, monitored by international forces, a continued US partnership with those fighters and an effort to guard and monitor oil fields in southern Syria, but that Ankara needed to back down first.

Turkey’s offensive has displaced some 300,000 people and led to 120 casualties among civilians and 470 among SDF fighters, the Syrian Observatory for Human Rights said on Sunday. Turkey says 765 terrorists but no civilians have been killed.

Here's What We Should Do About Syria Canada votes as Trudeau, clouded by scandals, tries to hold power