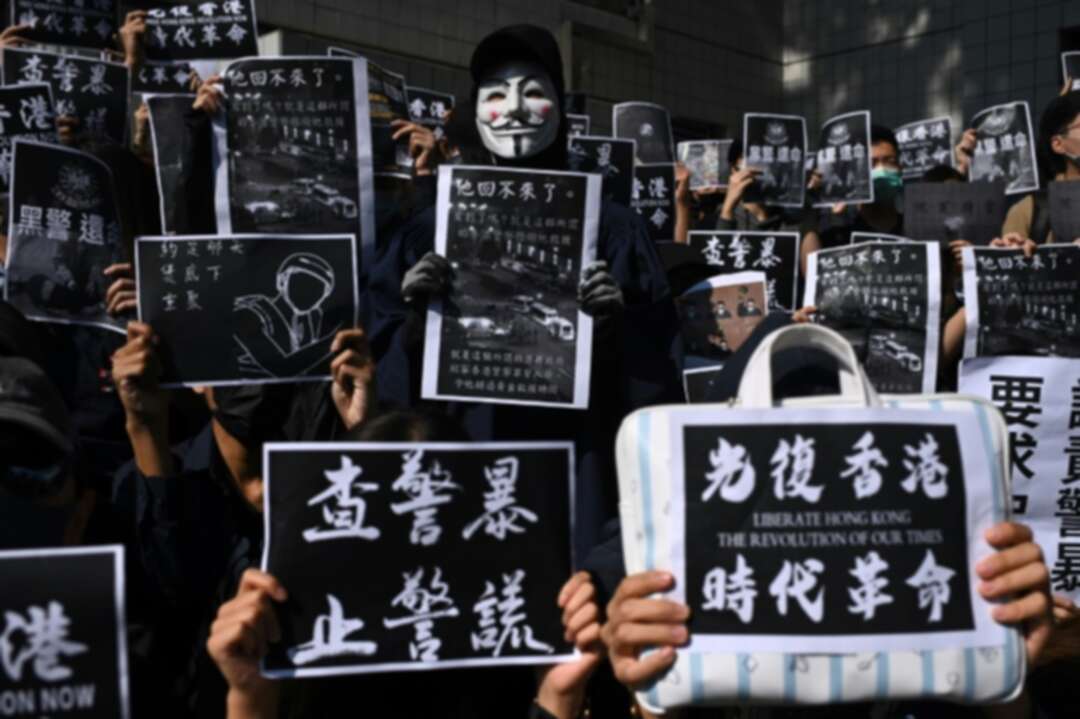 A Hong Kong student who sustained head injuries when he fell during clashes with police died on Friday, triggering a fresh wave of outrage from the pro-democracy movement and fears of more violent unrest.

Although the precise chain of events leading to 22-year-old Alex Chow's fall are unclear and disputed, his death is the first student fatality during five months of demonstrations.

Protesters, who have made alleged police brutality one of their movement's rallying cries, responded to Chow's death with calls for Friday night vigils across Hong Kong and rallies over the weekend.

"Today we mourn the loss of a freedom fighter in Hong Kong," Joshua Wong, a prominent pro-democracy campaigner, said on Twitter.

"We will not leave anyone behind - what we start together, we finish together. Given the losses suffered by Hong Kong society in the past month, the government must pay the price."

Online forums used by the largely anonymous and leaderless protest movement also quickly filled up with the calls for vigils to mourn Chow's death.

"The atmosphere in Hong Kong is like a ticking bomb," Lo Kin-hei, a local pro-democracy councillor and activist, wrote on Twitter. "HKers don't trust the police will give us the truth."

Police have repeatedly denied any allegations of wrongdoing in relation to Chow's death.

The lead officer in the case, Superintendent Ewing Wu, again insisted on Friday that police were not at fault.

"As for the allegations that police chased the deceased or that we pushed him and caused him to fall, the police hereby make a solemn statement again that nothing of the kind happened," Wu told reporters.

Chow was taken to hospital early on Monday morning following clashes between police and protesters in the middle-class district of Tseung Kwan O.

He was certified dead by the hospital on Friday morning after failing to emerge from a coma.

He had been found lying unconscious in a pool of blood inside a multi-storey car park that police had fired tear gas towards.

Protesters had been hurling objects from the building, in the type of confrontation that has become routine in late-night rallies over recent months.

Police acknowledged that tear gas had been used on Sunday night to disperse protesters near the car park where Chow fell.

Wu, the lead investigator, confirmed on Friday police entered the car park twice to contain the protesters but said that officers were not inside when Chow fell.

Wu and a police spokeswoman also rejected accusations that officers delayed paramedics getting to the scene.

In a short statement, the Hong Kong government expressed "great sorrow and regret" on Friday over Chow passing away.

"This isn’t a diplomatic question so I suggest you ask the relevant government department. I will just say this: stopping the violence, eliminating disorder, and restoring order is Hong Kong’s most urgent task," Geng told reporters.

Chow was a student at Hong Kong University of Science and Technology.

After the ceremony was cut short, hundreds of students gathered to mourn Chow's passing and condemn what they described as police brutality.

"Hindering rescuers is attempted murder!" Student chanted as they marched in the campus.

Millions of people have taken to Hong Kong's streets since June in the greatest challenge to China's rule of the city since its handover from the British in 1997.

China governs Hong Kong under a special "one country, two systems" framework that is meant to give the city more freedoms and liberties than on the mainland.

But public anger has been building for years over a belief that Beijing is eroding those freedoms, especially since President Xi Jinping came to power.

The protests were triggered by a government effort to introduce a law allowing extraditions of criminal suspects to mainland China.

Hong Kong's government belatedly withdrew the plans but not before the protest movement escalated into wider calls for democracy.

Protesters are demanding fully free elections to choose the city's leader, as well as an investigation into alleged abuses by police.