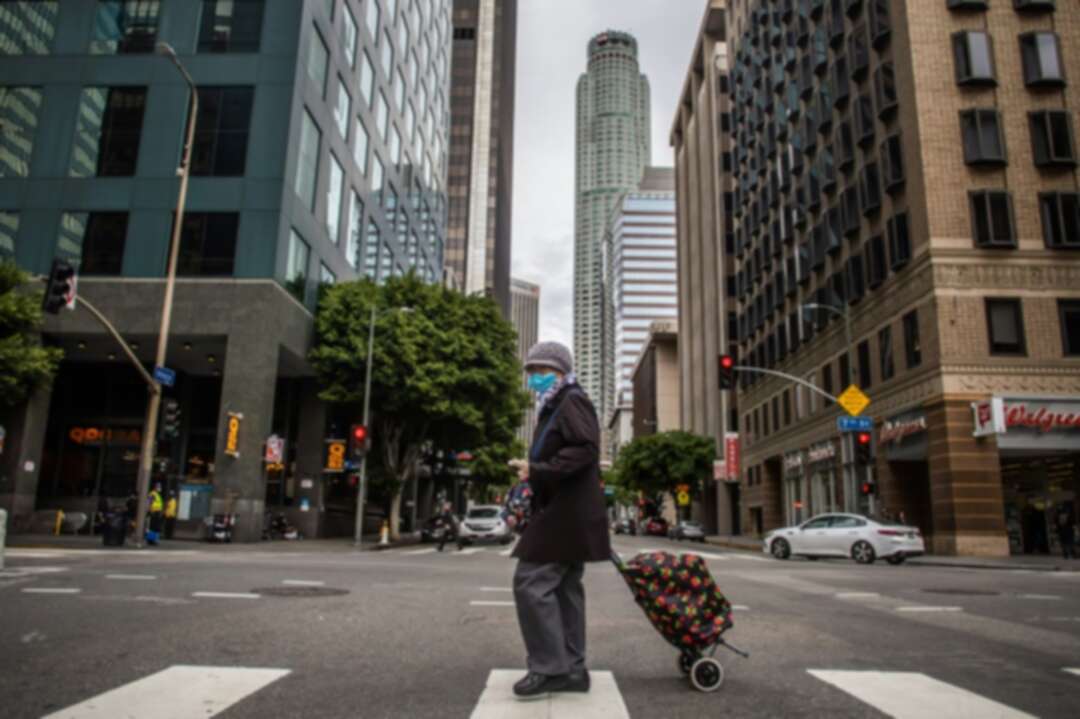 From Germany banning gatherings of more than two people, New Zealand announcing a four-week lockdown and Hong Kong shutting its borders to all non-residents, the new round of containment efforts highlighted a deepening sense of panic around the world.

The Tokyo Olympics slated for July also looked increasingly likely to be postponed, with Canada announcing it would not send athletes to Japan then and Australia saying it was preparing for a one-year delay.

In the United States, President Donald Trump ordered thousands of emergency hospital beds to be set up at coronavirus hotspots as a trillion-dollar economic rescue package crashed in the Senate.

The death toll from the virus surged to more than 14,400, according to an AFP tally on Sunday, with Europe the epicenter. Global emergency

Italy's world-worst toll from the pandemic approached 5,500 with another 651 deaths reported on Sunday, a day after it surpassed China with the highest number of fatalities.

European nations continued to choke people movement, with Greece on Monday morning to follow Italy, Spain, and France in imposing a nationwide lockdown.

In Germany, Chancellor Angela Merkel on Sunday announced the ban on gatherings of more than two people. She did so while in quarantine herself because she had met an infected doctor.

Like in Europe and elsewhere around the globe, the lockdowns have decimated the tourism industry.

"That was heartbreaking. We have made a huge investment preparing for a successful tourism season," hotel owner Tamriko Sikharulidze told AFP in Tbilisi after Georgia declared a state of emergency over the weekend.

Police patrolled the deserted streets of Rome on the weekend, while checks were carried out on Italian beaches after local officials complained people were defying isolation orders by catching some time in the sun.

In his weekly prayer, streamed online to avoid attracting crowds, the Pope urged all Italians to follow isolation measures "for the good of us all."

Spain's prime minister said he would ask parliament to extend a 15-day state of emergency, which bars people from leaving home unless essential, until April 11.

Spain recorded close to 400 new fatalities Sunday, bringing the total to 1,720, suggesting the lockdown was failing to be effective. Opera star Placido Domingo said he had tested positive.

Residents across France, where the death toll jumped to 674, remained shut in their homes. Global emergency

A curfew was imposed in some regions and the mayor of Paris called for even more drastic confinement measures in a city under lockdown.

Britain inched towards similar measures as Prime Minister Boris Johnson warned the country was a couple of weeks behind registering similar numbers to Italy.

In the United States, more than a third of Americans were under various forms of lockdown, including in New York, Chicago, and Los Angeles, but the number of infections in the country has continued to climb.

Highlighting the desperation inside the world's biggest economy, the mayor of New York said his city was just 10 days away from running out of ventilators.

And a trillion-dollar Senate proposal to revive the US economy crashed Sunday after receiving zero support from Democrats, further traumatizing investors who are watching stock markets implode worldwide.

Asian markets were hammered on Monday, and European stocks followed with a drop of four percent at the open, as they absorbed the failed US stimulus effort and the barrage of other bad news from across the world.

"This is the biggest economic shock our nation has faced in generations," Australian Prime Minister Scott Morrison said as he warned the pandemic could lead to a crisis akin to the 1930s Great Depression.

As the pandemic overwhelms hospitals, doctors are having to quickly prioritize patients based on their chances of survival, inflicting a huge moral burden.

"We go into medicine to heal people. Not to make choices about who can live," said Philippe Devos, an anesthesiologist in Belgium.

The virus emerged in China late last year, after first being detected at a market that sold wild animals for human consumption in the central city of Wuhan.

China has since sought to sow doubts over whether the virus began in Wuhan while portraying itself as a savior in the global fight and a role model for quarantines.

China on Monday reported no new local cases of the virus but confirmed another 39 infections from overseas.

However, Beijing's communist leaders have also been criticized at home and abroad for a perceived lack of transparency, particularly at the start of the outbreak.

Trump has been among those critics and angered China by branding it the "Chinese virus".

On Sunday he complained again about a lack of information and transparency from Beijing.

"They should have told us about this," Trump said. "I'm a little upset with China. I'll be honest with you."

There are fears across Asia of "imported" cases from Europe and other hotspots. Global emergency

New Zealand has yet to be hit hard but on Monday Prime Minister Jacinda Ardern announced a four-week lockdown to prevent a Europe-style crisis.

"The worst-case scenario is simply intolerable," Ardern said. "It would represent the greatest loss of New Zealand lives in our history and I will not take that chance."

Hong Kong, which had largely avoided the virus in the first wave despite being so close to the Chinese mainland, announced a ban on all non-residents from entering.

"Sometimes when people drink more, there may be some intimate acts," she told reporters. levant