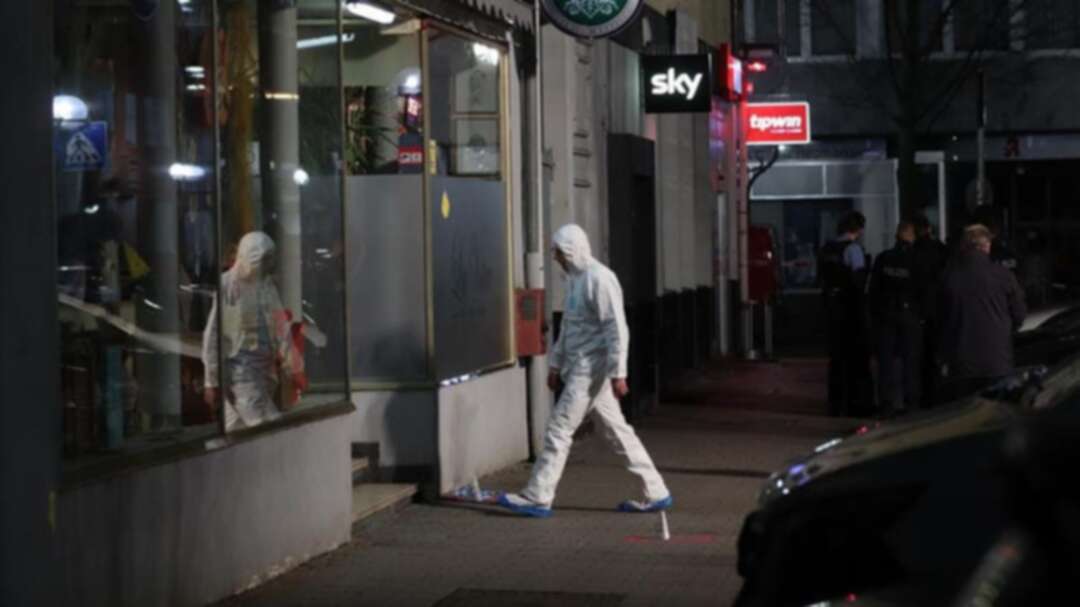 Forensic police investigates the scene of a shooting in Hanau, western Germany, on February 20, 2020. (AFP)

A man suspected of shooting dead nine people in shisha bars in a German town before killing himself and his mother had posted a manifesto online including conspiracy theories and deeply racist views, prosecutors said on Thursday.

The presumed attacker - a 43-year-old German man identified as Tobias R. - was found dead close to a gun soon after the shootings late on Wednesday in Hanau, near Frankfurt, authorities said.

Chancellor Angela Merkel condemned the “poison” of racism. Her deputy, Olaf Scholz, took to Twitter to say: “Politically, nobody can deny that 75 years after the Nazi dictatorship there is real terror again.”

The gunman burst into a bar in downtown Hanau then drove to the second bar in town and opened fire again, police and witnesses said.

Police officers secure an area after a shooting in Hanau near Frankfurt, Germany, on February 20, 2020. (Reuters)

“First we heard five or six rounds of gunfire,” a German-Turkish survivor who gave his name as Muhammed told Reuters from his hospital bed in Hanau.

“Then I saw the man entering. I was eating my meal at that time. We were all eating. We gave orders. The man entered,” he said, sobbing.

Officers chased a car leaving the scene of the last shooting to another address, where they found the bodies of the suspect and his 72-year-old mother, both with gunshot wounds, police said.

“On the suspected perpetrator’s home page, he had put up video messages and a kind of manifesto that, in addition to obscure thoughts and absurd conspiracy theories, pointed to deeply racist views,” said Prosecutor General Peter Frank.

Frank told reporters the nine people shot dead had immigrant backgrounds. His office later said they included German citizens and foreigners aged between 21 and 44. Six more people were injured in the attack, one seriously.