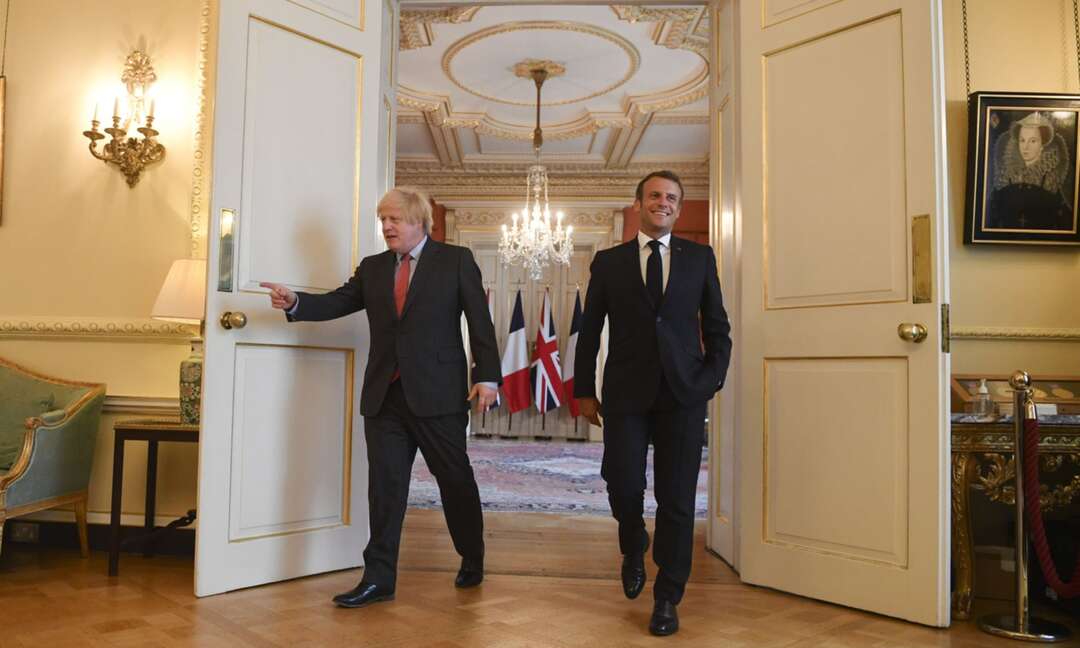 Good morning and welcome to Friday. Warren Murray here to zero in on the stories that count.

Western leaders are scrambling to fend off accusations that they have failed to address the lack of vaccines for poorer countries, as the UK hosts the G7 summit today. Boris Johnson is to pledge that Britain will donate surplus doses to the cause and cut to 100 days the time it takes to produce new jabs. The French president, Emmanuel Macron, has proposed that 5% of vaccines from G7 nations be sent to poorer countries, especially in Africa. Both Russia and China are threatening to win an escalating vaccine diplomacy war by sending their vaccines direct to Africa, while the G7 club of wealthy nations continues to pile up surpluses in case stocks run out. Serbia has received almost 1m Covid-19 vaccine doses from China’s state-owned Sinopharm and tens of thousands of shots of Russia’s Sputnik V.

Russian and Chinese companies have also been more willing than their western counterparts to license manufacturers in places like Indonesia, the UAE and Malaysia to make vaccine themselves. Big pharma needs to be confronted to allow fairer access to vaccines, a South African delegate to the World Trade Organization has declared, amid calls for a patent waiver to boost production. There are predictions that many low-income countries may not be able to reach mass immunisation until 2024. “The first effective vaccines were ready four or five months ago,” said Mustaqeem De Gama. “Do you think it would have made a difference if we had the capacity to manufacture? I certainly think so.” Vaccine equality is sure to be a continuing Covid topic today – stay on top of things at our global live blog.

Rock pics and chill – Nasa’s science rover Perseverance, the most advanced astrobiology laboratory ever sent to another world, has landed safely on Mars. The six-wheeled rover arrived within its target zone inside Jezero crater, site of a long-vanished Martian lake bed. It had flown through space for nearly seven months, covering 293m miles (472m km) before entering the Martian atmosphere at 12,000mph (19,000km/h) and enduring “seven minutes of terror” before the spacecraft slowed itself by parachute, then hovered on its rockets and lowered the rover by “skycrane” to the surface.

The first pictures included a view of the flat, rocky surface of the Jezero crater. Its primary aim is to search for fossilised signs of microbes that may have lived on Mars about 3bn years ago. Perseverance will drill into the ground and take core samples, then stow them on the surface for a future mission to retrieve. It will also deploy a drone helicopter called Ingenuity that is the first machine ever sent to fly around on another planet. It’s busy around the red planet right now with the UAE’s Hope probe also sending back its first picture.

Going hungry on universal credit – Many people claiming universal credit for the first time during the pandemic were unable to put aside enough cash to save £10 a month, eat healthily or regularly, or pay bills because it was inadequate to meet basic living costs, a study has found. A survey of thousands who signed on after losing their job under lockdown concludes that even with the £20 a week uplift many have struggled. One in six new claimants surveyed had skipped a meal in the previous two weeks. The study does praise the Department for Work and Pensions (DWP) for coming through its “first major economic test” by processing millions of new claims over a short period.

Cancún but shouldn’t have – Ted Cruz has sparked outcry after the Republican senator from Texas embarked on a trip to the sunny Mexican tourist resort of Cancún as millions of his constituents endure deadly power outages and freezing temperatures. After photos of Cruz on the plane went viral on Twitter, prompting fierce criticism, the senator returned to Texas on Thursday, saying the trip was “obviously a mistake”. Cruz had urged Texans to “just stay home” during a radio interview on Monday. Cue the internet to break out the memes.

Nuclear talks olive branch – The US has agreed to take part in multilateral talks with Iran which the EU has offered to broker, with the aim of reinstating the 2015 nuclear deal that was torn up by Donald Trump. There was no immediate word from Tehran on whether it was ready to join the talks, which so far have no agreed start time or location. The talks have been announced at a time of growing tension, as in the absence of the deal’s constraints Iran has increased its use of advanced centrifuges, begun making small quantities of uranium metal (essential for building warheads) and threatened to expel inspectors from the International Atomic Energy Agency.

Neanderthals’ final excursion – Neanderthals may have died out because Earth’s magnetic poles flipped for a thousand years, researchers are theorising. On a scale of billions of years it happens quite often – the last time was the “Laschamps excursion” 42,000 years ago, which would have weakened Earth’s protective magnetic field, leaving it exposed to high-energy particles and combining with a period of low solar activity to induce wild climatic fluctuations.

“It probably would have seemed like the end of days,” said Prof Chris Turney of the University of New South Wales. The team have collectively termed this period “the Adams event”, a nod to Douglas Adams’s Hitchhiker’s Guide to the Galaxy in which 42 was said to be the “answer to the ultimate question of life, the universe and everything”. They did radiocarbon analysis on the rings of ancient kauri trees from New Zealand to track the rise in carbon-14 levels in the atmosphere produced by increasing levels of high-energy cosmic radiation. Our ancestors may even have started living in caves at that time because of the harsh conditions, the researchers say.

Today in Focus podcast: Case of the Freshwater Five

In 2011 five men were sentenced to a total of 104 years for conspiracy to import £53m worth of cocaine. They have always said they are innocent. As new evidence is due to be put before the court of appeal, we investigate the case of the Freshwater Five.Lunchtime read: ‘You’re going to upset some racists’

Stopping Trump, reforming Facebook and risking his life to make a Borat sequel. In an exclusive interview, Sacha Baron Cohen unveils his plans for a revolution – and reveals how it feels to come out as himself.Sport

Serena Williams’s longevity in tennis is clearly no consolation to her and the last image of her at the Australian Open was of her abruptly leaving her press conference in tears following defeat to Naomi Osaka. Novak Djokovic remains on course for another title at Melbourne Park after the Serb ended the surprise run of qualifier Aslan Karatsev with a brisk 6-3, 6-4, 6-2 win to reach the men’s final once more. Real Sociedad had no answer for Manchester United’s pace and ruthlessness embodied by the irrepressible Bruno Fernandes, who scored twice in a 4-0 Europa League win. Bukayo Saka scored a swift equaliser in a 1-1 draw with Benfica after Arsenal fell behind in their away leg in Rome, while Gareth Bale was back on the scoresheet as Tottenham cruised to a 4-1 win against Wolfsberger.

On an astonishing evening in Antwerp, Rangers led 1-0 and were 3-2 down before claiming a 4-3 victory. Jonny Bairstow has defended England’s rotation policy despite it emerging that Sam Curran has been ruled out of the rest of the Test series in India because of logistical difficulties arising from the Covid-19 pandemic. England’s Moeen Ali has been sold to Chennai Super Kings for £700,000 in the opening round of the 2021 Indian Premier League Auction. Samira Zargari, the coach of the Iranian women’s Alpine skiing team, has been barred by her husband from travelling to Italy for the world skiing championships, according to reports in the Iranian press. And the Swansea City midfielder Yan Dhanda has hit out at “selfish” social media companies and criticised Facebook for not contacting him after he was racially abused on Instagram.

The chief executive of the trading app at the centre of the GameStop shares affair has defended his decision to halt trading in the company’s shares at a congressional hearing on Thursday. He called the allegations that Robinhood acted to help hedge funds caught out by the sudden surge in GameStop shares “absolutely false”. The pound is flat at $1.396 and €1.154, while the FTSE100 is expected to open slightly down.

The Guardian leads today with “Facebook under fire around world over Australian ban” and our late edition squeezes a picture of the Mars landing on to the front, as others have. The Metro has “#delete Facebook – worldwide campaign to ditch social media bully” and a picture of the Australian PM, Scott Morrison, whom many readers might never have heard of much less seen before, as well as Mark Zuckerberg.

The Telegraph has “Revealed: the vaccine data that paves the way back to freedom”, adapting that old adage, “the road to freedom is paved with data”. The Times says “Hope for holidays overseas”. The paper “has been told” that getaways might be possible this summer. A Greek minister has said Greece is negotiating with the UK to bring in mutually recognised vaccine passports. The Sun leads with “Get one in one’s arm” as Prince Charles joins prominent people encouraging vaccination.

The Mail alerts readers that vaccination age bands are to be widened with “Over-40s to get jabs by end of March”. The i has “Public’s verdict on ending lockdown” – that being “send children back to school on 8 March” but reopen pubs and restaurants with caution. The FT leads with “Macron calls for urgent supply of Covid vaccine to poorer nations” – the French president getting out of the blocks early as Britain hosts G7 talks today. GameStop traders fronting Congress for questioning also gets a spot. The Express reports on what must be some of the most horrible people in the world: “vile trolls” online who ambush young epilepsy suffers with strobe effects to trigger convulsions.