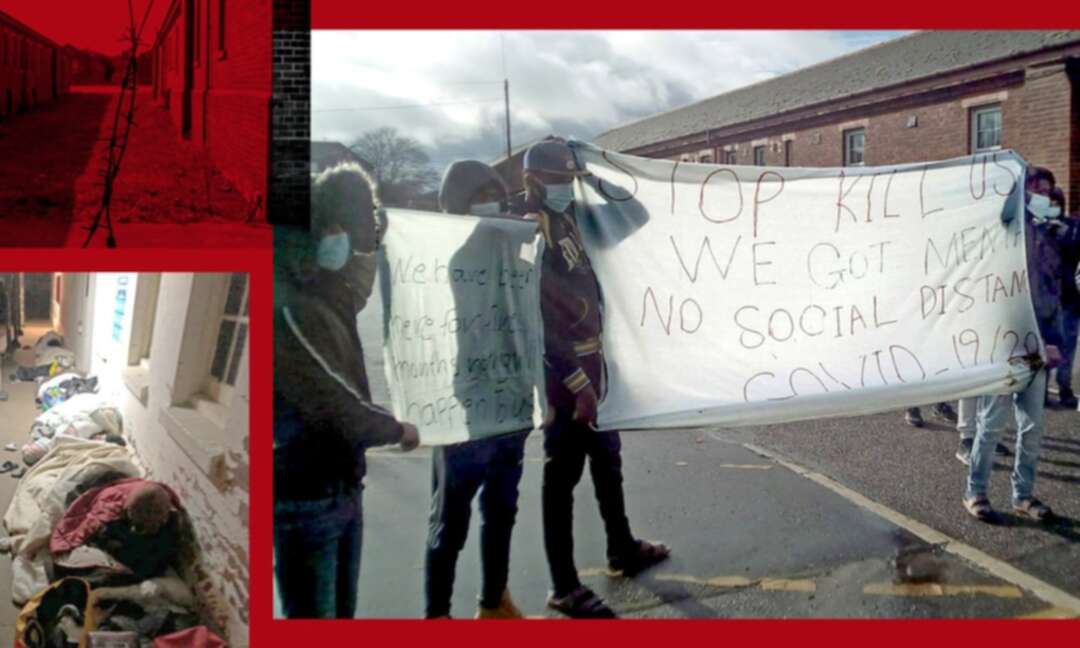 mages from Napier barracks, one of the sites used to house asylum seekers. Composite

The Conservative former immigration minister Caroline Nokes has accused the Home Office of using barracks accommodation for asylum seekers to make the country appear to them “as difficult and inhospitable as possible”.

She said asylum seekers should not be “segregated into a ghetto” in barracks accommodation, but instead placed in supported accommodation where they have access to a range of facilities.

Nokes is among a group of backbench Conservative MPs with barracks in their constituencies who have raised concerns about their use to house asylum seekers. Others include Damian Collins, whose Folkestone and Hythe constituency includes Napier barracks, and Richard Fuller, the MP for North East Bedfordshire, where there is a new barracks-style development close to Yarl’s Wood immigration removal centre.

There is growing concern about the conditions inside the barracks. Inhabitants say they are freezing cold and filthy, with poor quality drinking water and food so bad they refuse to eat it. There have been Covid outbreaks, hunger strikes and suicide attempts.

The decision to hold several hundred asylum seekers in the barracks has triggered a raft of legal actions as well as outcry from human rights charities including the Red Cross, Care4Calais, Detention Action and Medical Justice.

Military barracks in remote locations have never before been used to accommodate asylum seekers, many of whom have survived torture and other forms of persecution before fleeing their home countries. Some of those tortured in military or prison facilities at home have said the barracks have triggered nightmares and flashbacks.

“We as a nation can do better than this,” said Nokes, who was immigration minister in Theresa May’s government between January 2018 and July 2019. “The Home Office really needs to get its act together. They need to revamp the accommodation contracts and put in place more contracts for supported accommodation.

She has been vocal about her concerns not only about Home Office plans to establish barracks-style accommodation on Ministry of Defence land in her own constituency of Romsey and Southampton North, but also about wider barracks policy and the approach to asylum seekers.

“I don’t think the Home Office is listening to me. I think they have become very blinkered,” she said. “Barracks are not a short-term quick fix. They have failed.”

She said she was surprised that the Home Office was moving forward with barracks plans while a handful of legal actions were under way to challenge their use.

“Is now the time to introduce even worse accommodation when we don’t know what the outcome of the legal challenges will be? Better to hold fire until such time as we have seen the outcome. That doesn’t appear to be the Home Office strategy,” she said.

It is understood that the use of one barracks-style accommodation, an officers’ mess at RAF Coltishall in Norfolk, is winding down. Around 40 asylum seekers are accommodated there.

The Conservative MP for Broadland, Jerome Mayhew, said the community had been taken by surprise when the Home Office moved asylum seekers in there last May, but had been supportive.

“Whilst the centre is undoubtedly well run, it is generally accepted that its rural location makes it unfit for anything but emergency use as an asylum centre, so I am glad that the Home Office has committed to closing the facility as soon as the Covid crisis is past,” Mayhew said.

They focus on the lawfulness or otherwise of providing such accommodation for asylum seekers, breach of asylum seekers’ human rights, false imprisonment, deprivation of liberty, and failure to conduct vulnerability assessments.

Sue Willman, of Deighton Pierce Glynn, who is representing several asylum seekers at Napier barracks, said: “We have issued a judicial review against the home secretary challenging her decision to detain three asylum-seeker clients, each of whom is either a victim of torture or trafficking or both.”

Toufique Hossain, director of public law at Duncan Lewis solicitors, which is bringing legal challenges at Napier and Penally, said: “The government’s strategy to segregate asylum seekers in collective ex-military/detention sites across rural and remote parts of England and Wales is yet another feature of its harsh, dehumanising immigration policy.

“Our clients have been subjected to detention and interrogation in their countries. They have fled having experienced rape, sexual abuse and torture. These military camps are obviously retraumatising.”

The immigration compliance minister, Chris Philp, said: “These sites were previously used to house military personnel – to suggest they are not good enough for asylum seekers is an insult. They are provided with three meals a day, and have their basic needs catered for.

“The damage and destruction at Napier Barracks put lives at risk, including staff and emergency service workers. This is totally unacceptable and I would like to thank the police and fire service officers who had to put themselves in harms’ way.”