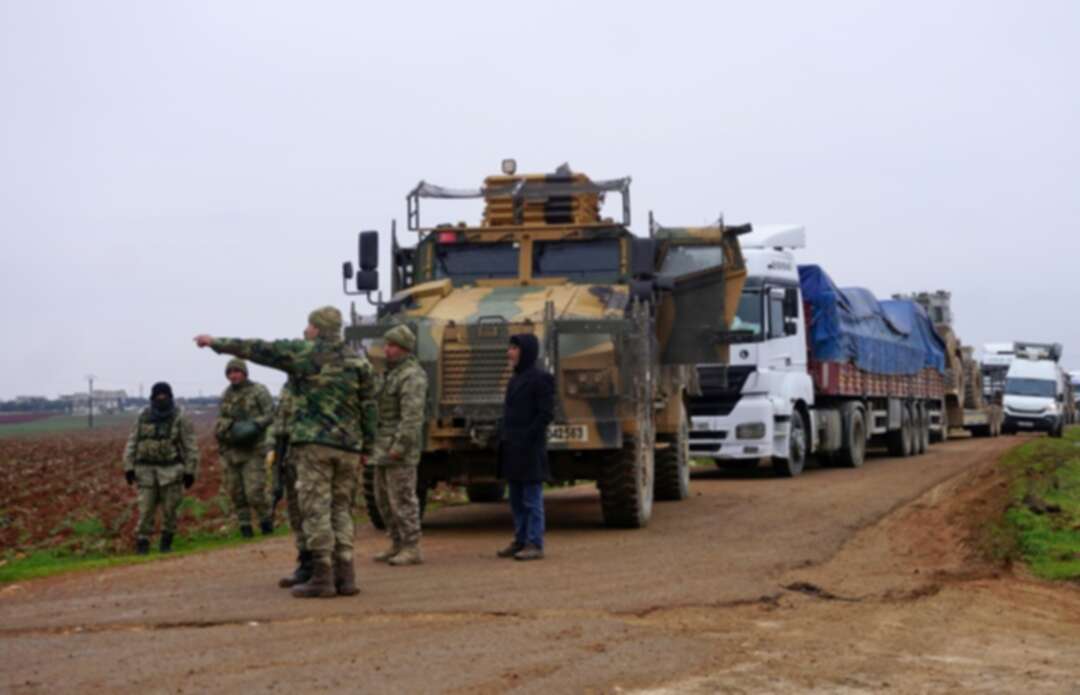 A convoy of Turkish armoured vehicles arrived Wednesday in the town of Binnish, northeast of Idlib city, in a new deployment File photo AFP

Erdogan's threats follow direct clashes between Turkish and the Syrian regime forces over the past 10 days, which have also strained his relations with Moscow, the key backer of President Bashar al-Assad.

Turkey has beefed up its positions in Idlib -- the last rebel bastion in Syria -- with hundreds of vehicles carrying commandos, howitzers, and soldiers crossing the border over the last few days.

"I hereby declare that we will strike regime forces everywhere from now on regardless of the Sochi deal if any tiny bit of harm comes to our soldiers at observation posts or elsewhere," Erdogan told a meeting of his ruling party in parliament.

He said 14 Turks have been killed and 45 wounded by regime shelling in Idlib since February 3.

Assad's forces, backed by Russian airstrikes, have pressed ahead with an offensive to retake the province from rebel groups despite the 2018 Sochi ceasefire deal agreed between Turkey and Russia.

The offensive has killed hundreds of civilians since December and sent hundreds of thousands fleeing for safety in harsh winter conditions.

In a rare move on Wednesday, Erdogan was directly critical of Russia.

"The regime, backed by Russian forces and Iran-backed militants, are continuously attacking civilians, committing massacres and shedding blood," he said.

He added that Turkey would do "whatever necessary" to push Syrian forces back behind the 12 observation posts it set up in Idlib under the Sochi deal.

An AFP correspondent in Idlib said a new convoy of Turkish armored vehicles arrived Wednesday in the town of Binnish, northeast of Idlib city, in a new deployment.

But Syrian forces have been relentlessly advancing, seizing numerous towns and retaking full control of the crucial M5 highway that links major cities for the first time since 2012.

"We are determined to push back (regime forces) behind the borders of the Sochi deal by the end of February," said Erdogan.

"We will do whatever is necessary both on the ground and in the air without any hesitation and any delay."

That followed reports that Turkish forces shot down a Syrian military helicopter this week in Idlib, though that has not been confirmed by Ankara.

Russian President Vladimir Putin and Erdogan spoke by phone on Wednesday, with the Kremlin saying they remained determined to implement existing ceasefire agreements.

The Turkish presidency confirmed the call but did not provide details.

A Russian delegation including military and intelligence officials held two rounds of talks in Ankara this week, but no concrete agreement emerged.

Foreign Minister Mevlut Cavusoglu said a Turkish delegation would now go to Moscow "in the next few days."

"Continuing to work with Russia, we are working to secure a lasting ceasefire. But even if nothing results from this, our determination is clear and we will do what is necessary," he said.

Meanwhile, Syrian regime forces pushed on with their offensive on Wednesday, securing further areas along the M5 highway.

Turkey, which already hosts some 3.7 million refugees from Syria, fears a fresh influx if Idlib falls to the regime and has kept its border closed to newly displaced people.

A furious Erdogan blasted "profound silence" from the international community over the violence in Idlib.

"Even if everyone turns a blind eye, turns their back, and freezes their conscience, Turkey will not remain a bystander to this situation."