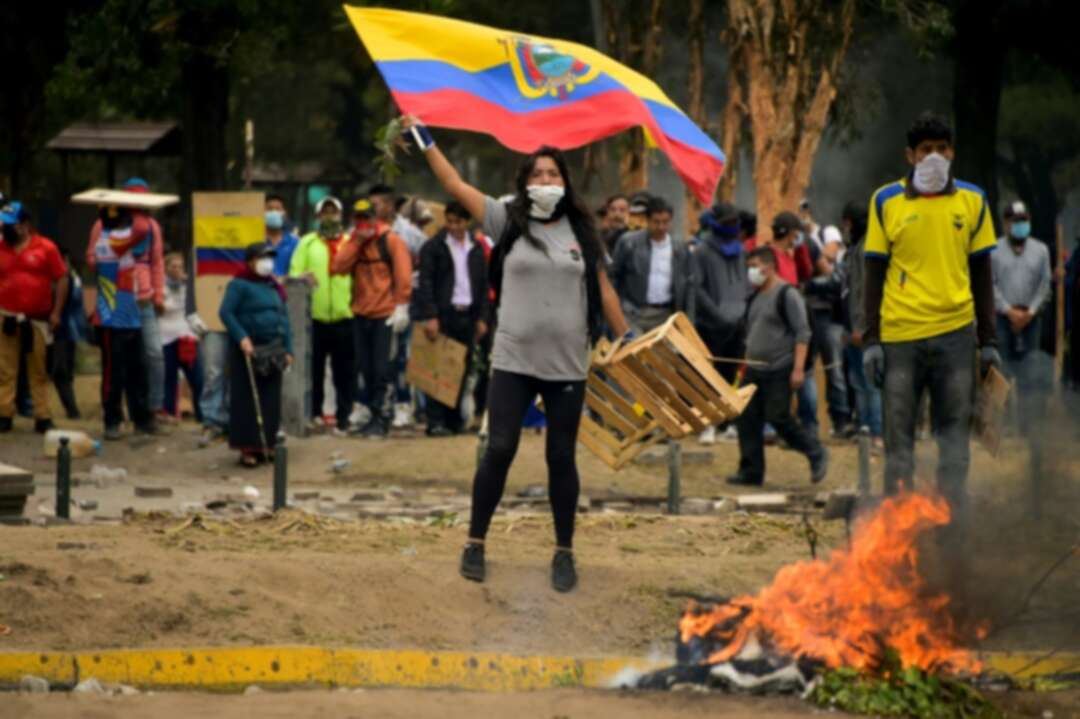 A first meeting between Ecuador's president and indigenous leaders will take place on Sunday, the United Nations said, after Lenin Moreno ordered a curfew and military control in the capital to try to quell deadly, anti-austerity protests.

The rolling demonstrations have left six people dead and nearly 2,100 wounded or detained, according to authorities, with protesters on Saturday targeting a television station and a newspaper as well as setting fire to the comptroller general's office.

Sunday's meeting will be held in the capital Quito, the UN and Catholic Church said in a joint statement.

"We put our trust in the goodwill of all to establish a dialogue in good faith and find a quick solution to the complicated situation in the country," they added.

The crisis broke out at the start of October after Moreno ordered fuel subsidies cut as part of a deal struck by his government to obtain a $4.2 billion loan from the International Monetary Fund.

CONAIE, the indigenous umbrella group leading the protests, had previously rejected an offer of dialogue and said the talks would focus on "the repeal or revision of the decree" that has left consumers paying more than double for fuel.

Ecuador's indigenous groups make up a quarter of the country's 17.3 million people. Thousands from disadvantaged communities in the Amazon and the Andes have traveled to Quito where they are spearheading demands that the subsidies continue.

Demonstrators on Saturday ransacked and set fire to the building housing the comptroller general's office, which was shrouded in thick smoke after being attacked with fire bombs.

Nearby, protesters built barricades in front of the National Assembly building as police fired tear gas at them, according to AFP journalists.

The Teleamazonas TV channel interrupted its regular broadcast to air images of broken windows, a burned vehicle and heavy police presence on the scene.

"For about half an hour, we were under attack. They threw stones at us, forced open the doors and threw Molotov cocktails," presenter Milton Perez said.

The station evacuated 25 employees, none of them hurt.

El Comercio newspaper reported on Twitter that its offices were attacked by a "group of unknowns." It did not provide further details.

"We have nothing to do with the events at the comptroller's office and Teleamazonas," said CONAIE.

Protesters did not immediately heed the curfew that went into effect at 3:00 pm (2000 GMT), with security forces still struggling to impose order in some parts of the city as night fell.

"Where are the mothers and fathers of the police? Why do they let them kill us?" cried Nancy Quinyupani, an indigenous woman.

The restrictions in Quito, a city of 2.7 million, came on top of a state of emergency Moreno had declared on October 3, deploying some 75,000 military and police and imposing a nighttime curfew in the vicinity of government buildings.

In televised comments, Moreno said Saturday "was a sad day for Ecuador."

"Dark forces linked to organized political delinquency and led by Correa and Maduro, with the complicity of narcoterrorism, criminal groups and violent foreign citizens have caused never-before-seen violence," he added.

It is the second time Moreno has accused his predecessor Rafael Correa and Venezuelan President Nicolas Maduro of orchestrating the crisis to destabilize the country.

The violence has forced Moreno to relocate his government to Ecuador's second city, Guayaquil, and has hit the oil industry hard with the energy ministry suspending more than two-thirds of its distribution of crude.

Moreno is struggling with an economic crisis that he blames on waste and corruption by Correa's administration.