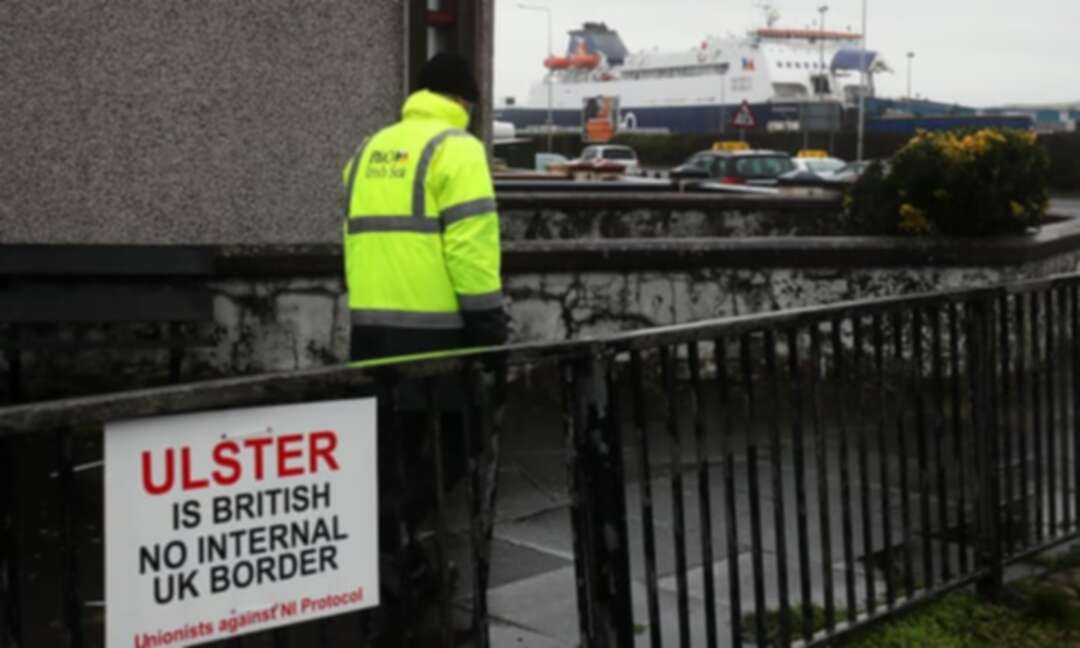 An anti-protocol sign near the entrance to Larne port in Northern Ireland. The new rules have caused problems for consumers and businesses.

The Brexit agreement’s Northern Ireland protocol will not be scrapped, the Irish government and the EU have said in an escalating row over the new trade barriers down the Irish Sea.

The Democratic Unionist party leader, Arlene Foster, has called for the measure designed to keep the Irish land border open to be replaced, but Dublin is focused on easing problems with the post-Brexit trade deal that have caused disruption at Irish ports.

The Irish foreign minister, Simon Coveney, told BBC Ulster “there is not going to be very dramatic change”, in the face of calls by the DUP for the protocol to be urgently axed.

“We want the protocol to function in a way that works for everyone, north and south, on the island of Ireland,” he said.

Foster hit back on the same programme, accusing Coveney of being “completely tone deaf to the concerns of unionism”.

On Wednesday the European commission vice-president, Maroš Šefčovič, said the UK and EU had a “shared commitment to the proper implementation of the protocol”.

He tweeted that this had been reiterated at a meeting with Michael Gove, Foster and Northern Ireland’s deputy first minister, Michelle O’Neill, on Wednesday night and they had agreed that “constructive solution-driven cooperation” was “essential to addressing outstanding issues”.

Gove and Šefčovič will meet again next week. It is understood a specialised committee dedicated to the working out of the protocol will be established in the coming days to move those talkson, with a meeting of the UK-EU joint committee chaired by Gove and Šefčovič pencilled in for mid March.

The effort to address the issues caused by the implementation of the protocol has been expedited by the aborted attempt by the EU to trigger article 16 of the protocol, which allows for the suspension of the arrangements in extreme circumstances.

Boris Johnson and Gove have capitalised on the EU’s embarrassment over the move and threatened to trigger article 16 themselves in parliament and in a letter to Šefčovič on Tuesday.

The UK is now demanding a two-year extension to the Brexit grace period for checks on trade but the EU made it clear last night it regarded article 16 as an ultimate on which it would not capitulate.

Efforts to de-escalate the row will do little to assuage the DUP’s opposition to the protocol.

Two days ago Foster, who is also Northern Ireland’s first minister, launched an official campaign to get the arrangements scrapped. At the same time she announced the party would be withdrawing from all engagements with the Irish government on matters relating to the protocol.

While many have considered the move a reflection of the binary politics that often define Northern Ireland, consumers and businesses agree the protocol has caused upset across all communities.

One shopper who contacted the Guardian on Wednesday said he had been unable to order goods, as he used to, from John Lewis or Currys.

“It feels like we are being left behind, a victim of a Brexit we didn’t vote for in Northern Ireland. I’m not angry about any of this, I’m just worried that things are going to get harder and more expensive at a time when many people are already struggling,” he said.

“I know the DUP (the people who voted for Brexit) are now upset at the outcome and are wanting to do something to ease these terrible supply issues, but it all feels a little too late.”

The MLA for Belfast South, Matthew O’Toole ,of the Social Democratic and Labour party, criticised the DUP’s approach.

“They are trying to amplify the issue of the Irish Sea border in a disembodied way, as if the Irish border existed in a sui generis way and could be got rid of without diplomatic consequence, political or economic consequence,” he said.