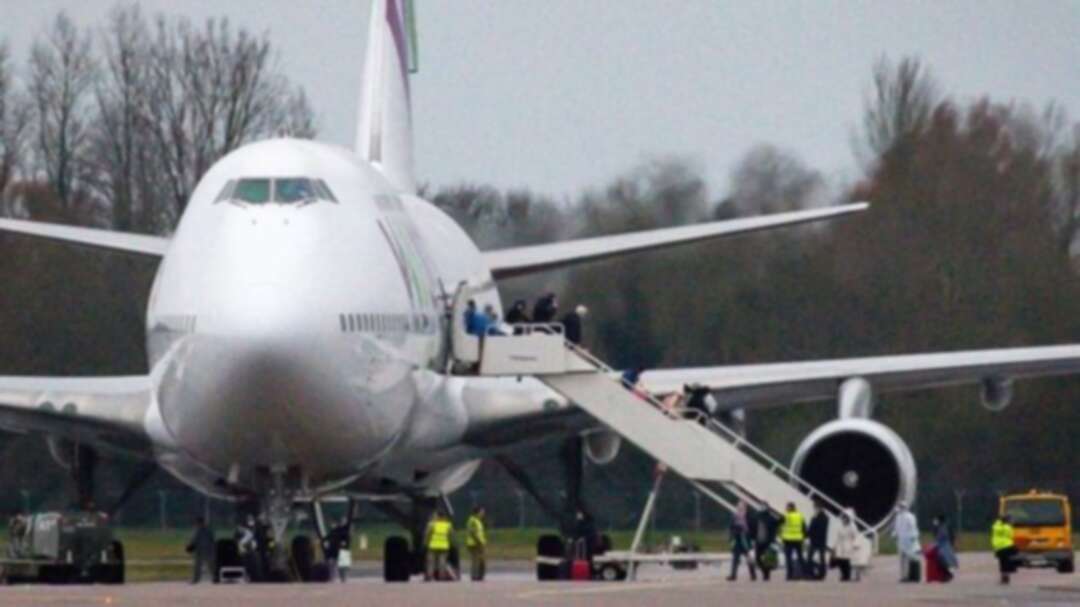 Around 200 British and foreign nationals were repatriated from Wuhan, the centre of the coronavirus outbreak, on Sunday

The number of people infected by the coronavirus in the UK has doubled to eight - after four more patients in England tested positive for the virus.

It comes as the government announced new powers to keep people in quarantine to stop the spread of the virus.

In order to do this the Department of Health has described the coronavirus as a "serious and imminent threat" to public health.

The overall risk level to the UK remains "moderate".

There have been more than 40,000 cases of the virus globally, mostly in China. The total number of deaths in China is now 908 - but the number of newly-infected people per day has stabilised.

Confirming the four new cases on Monday, chief medical officer for England Prof Chris Whitty said they were all "known contacts of a previously confirmed UK case, and the virus was passed on in France".

He added that they have been transferred to specialist NHS centres at Guy's and St Thomas' and the Royal Free hospitals in London.

The BBC's political correspondent Iain Watson said the new measures were announced because a passenger on the first UK flight from Wuhan, who is currently being held in quarantine on the Wirral, "is threatening to abscond".

"Currently the regulations are not strong enough to stop him leaving before the 14-day period is up so they brought in these new regulations to try and compel him to stay put," he said.

A Department of Health spokesman said: "We are strengthening our regulations so we can keep individuals in supported isolation for their own safety and if public health professionals consider they may be at risk of spreading the virus to other members of the public.

"This measure will rightly make it easier for health professionals to help keep people safe across the country."

On Sunday, around 200 British and foreign nationals arrived on the second and final flight chartered to the UK from Wuhan by the Foreign Office. Evacuees were taken to a Milton Keynes conference centre for 14 days of quarantine.

In a statement on Monday, Health Secretary Matt Hancock said Arrowe Park Hospital, on the Wirral, and Kents Hill Park conference centre, in Milton Keynes, have been designated as "isolation" facilities in the UK.

A statement on the Department of Health website said: "The Secretary of State declares that the incidence or transmission of novel coronavirus constitutes a serious and imminent threat to public health, and the measures outlined in these regulations are considered as an effective means of delaying or preventing further transmission of the virus."

The latest UK cases come after a British man who caught the virus in Singapore was transferred to St Thomas' Hospital in London on Thursday, from Brighton. He was announced as the third person to test positive in the UK.

Five British nationals who have tested positive in France were diagnosed after they came into contact with him, according to the French health ministry.

Meanwhile, a British man in Majorca has also been diagnosed with coronavirus, while his wife and two daughters tested negative.

The family said they had been in contact with a person who tested positive for coronavirus in France, the government in the Balearic Islands said.

The new virus was first reported in Wuhan, the capital of Hubei province. The city of 11 million has been in lockdown for weeks.

The outbreak was declared a global emergency by the WHO on 30 January.