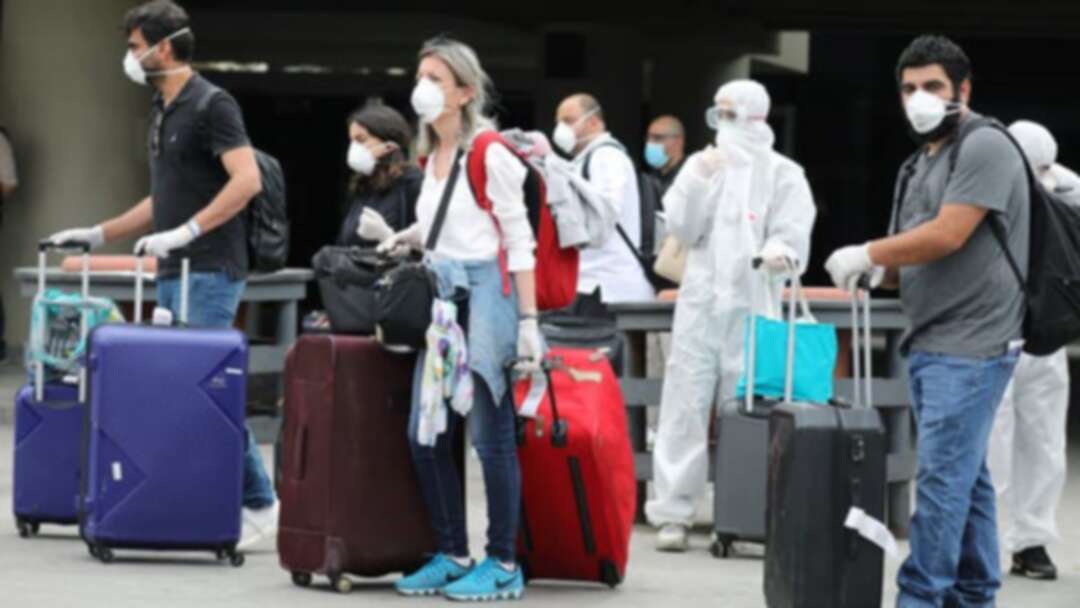 Lebanese people, who were stranded abroad by coronavirus lockdowns, are pictured wearing face masks and gloves as they hold their luggage upon arrival at Beirut's international airport, Lebanon. (File photo: Reuters)

Hundreds of thousands of Lebanese people will be infected with coronavirus and thousands will become critically ill if lockdown and social distancing measures are not respected, according to a report by an international non-government organization. Coronavirus

An internal report by the humanitarian medical NGO Doctors Without Borders (Medecins Sans Frontières) projected that in a best-case scenario, 658,074 people in Lebanon could become infected. The country has a population of around 6 million, including roughly a million Syrian refugees and around 175,000 Palestinian refugees. The report was provided to Al-Arabiya English by a source in the medical aid community.

The best-case scenario forecasts that 454,096 Lebanese citizens will be infected by coronavirus with another 159,519 Syrians and 24,460 Palestinians. Syrians and Palestinians live makeshift camps, in unhygienic conditions that could facilitate the spread of the contagion.

The report also underlines that as the virus reaches its peak, there could be a need for more than 9,000 hospital beds in a worst-case scenario and nearly 4,000 in a best-case scenario. Lebanon has between 350-500 ICU beds countrywide, according to Global Health Institute figures. A 2013 study by Blominvest puts the number of total hospital beds at around 15,000. Coronavirus

Amaury Gregoire, the organization’s head of mission in Lebanon, spoke to Al Arabiya to confirm the report’s figures and said the worst-case scenario figures are based on statistics from Italy, where the virus has been especially deadly and ICU occupancy was around 10 percent.

“Today, Lebanon is showing numbers less than that, around 2.2 percent or 2.3 percent,” he said.

The Lebanese government has imposed strict containment measures, which have helped in flattening the contagion’s curve. However, these measures have been difficult to implement in impoverished areas in the cities of Beirut, Saida, Nabatieh, and Tripoli. Coronavirus

There is fear that more relaxed measures would lead to infection flare-ups; this is exacerbated by the ongoing repatriation of thousands of Lebanese stranded abroad.

“Regarding the Lebanese diaspora flown into Lebanon, the Lebanese government has taken all the necessary measures at entry points for the Lebanese returnees. If these measures are followed and respected, this should not affect the situation, nor should we worry about any increase in cases, “says Gregoire.

Yet as the population grows restless with extensive confinement measures, set against the backdrop of the country’s economic collapse, maintaining these measures could become challenging for the Lebanese government, which could end up pushing Lebanon’s pandemic to new peaks. levant