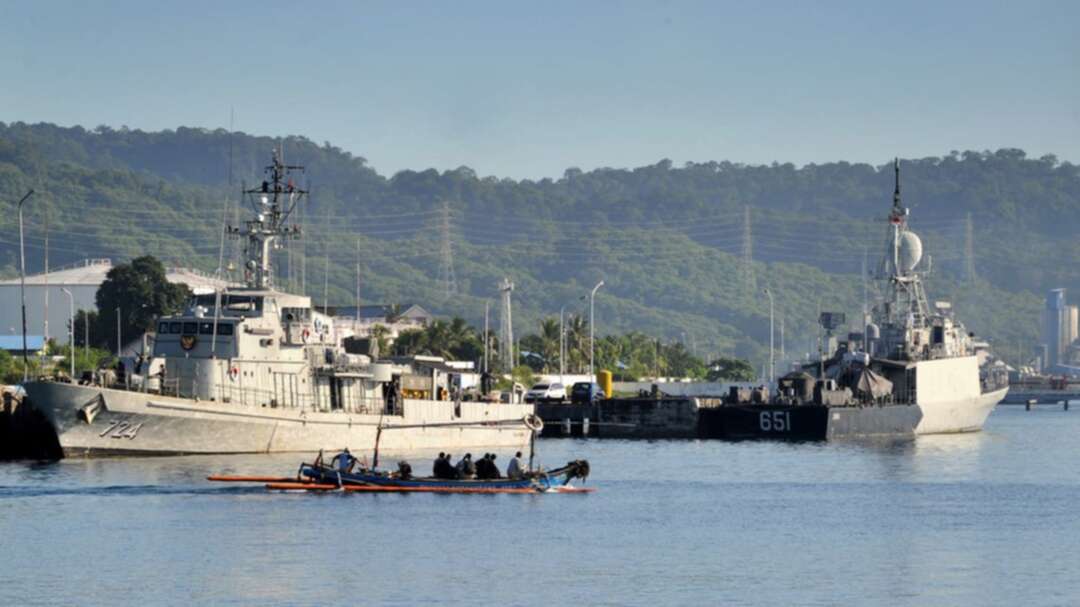 An outrigger canoe sails past Indonesian Navy ships at the naval base in Banyuwangi, East Java province, on April 24, 2021, as the military continues search operations off the coast of Bali for the Navy's KRI Nanggala submarine that went missing April 21 during a training exercise. (AFP)

Chinese navy ships have arrived off Bali to help haul up a submarine that sank last month killing 53 crew, the Indonesian Navy said Tuesday as it geared up for a deep-sea salvage operation.

The help arrived after other foreign ships from Australia, Singapore and Malaysia left the archipelago, having assisted Indonesian authorities in finding the stricken vessel.

The KRI Nanggala 402 -- one of five submarines in Indonesia’s fleet -- disappeared last month while it was scheduled to take part in live torpedo training exercises.

An underwater rescue vehicle supplied by neighboring Singapore gave visual confirmation that the German-built sub was lying on the sea floor more than 800 meters (2,600 feet) deep, broken in three parts, confirming there was no hope of finding survivors.

Two Chinese salvage ships were on standby in waters off Bali, while a third was expected to arrive later Tuesday, the Indonesian Navy said, adding that Chinese Navy officials in Bali were helping to examine data collected on the submarine.

All three salvage ships can dive up to 4,500 meters deep.

“The offer was welcomed by the Indonesian government,” it said in a statement Tuesday.

A vessel from Indonesia’s upstream oil and gas regulator task force SKK Migas, used for drilling operations, will also join the salvage operations. It has a crane with a capacity of 1,200 metric tons.

Last week the Navy said high-powered magnets and air balloons were among the possible options to lift the submarine. An undersea robot will also be used in the operation, it said.

The military has yet to offer an official explanation for the sinking of the decades-old submarine, which was delivered to the Southeast Asian nation in 1981.