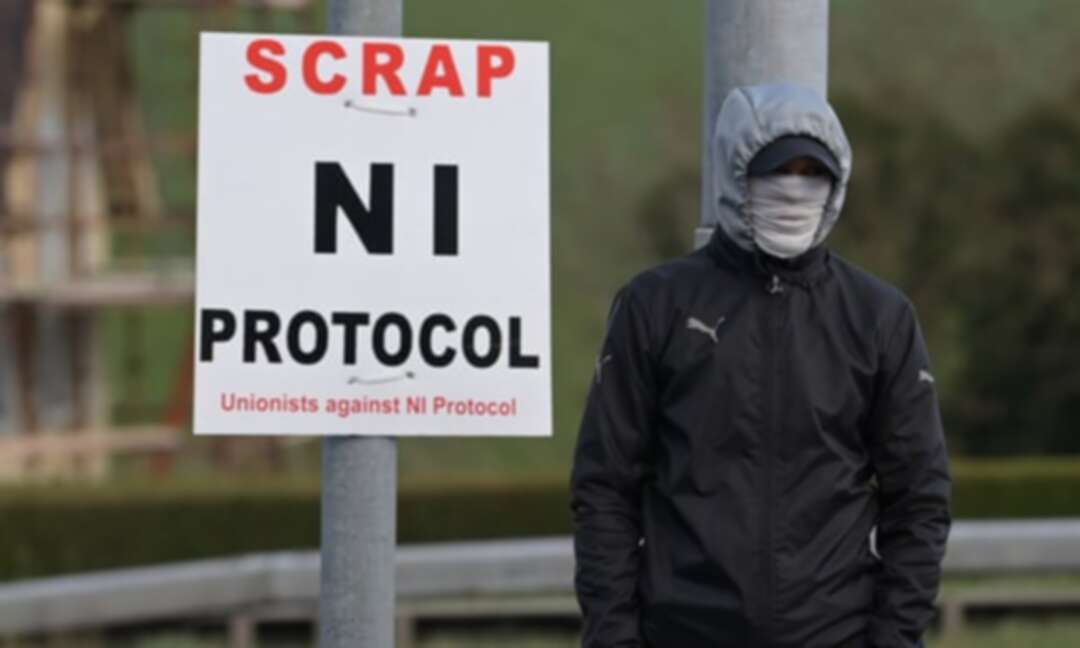 The protocol which has been opposed by unionists and contributed to loyalist rioting at Easter.

PM says he is ‘sandpapering’ protocol signed with EU, which he says has been misinterpreted Northern Ireland

Boris Johnson has said he is trying to get rid of the “ludicrous” Brexit border checks in Northern Ireland by “sandpapering” the protocol he signed with the EU in January 2020.

In a TV interview in Northern Ireland he also said the protocol had been misinterpreted and border checks were supposed to be light touch.

“What we are doing is what I think is removing the unnecessary protuberances and barriers that have grown up and we are getting the barnacles off the thing and sandpapering into shape,” he told a BBC Spotlight programme marking the centenary of Northern Ireland.

He claimed the way the protocol had been interpreted did not conform with the clauses in the deal, which specifically states it has to regard “the importance of maintaining the integral place of Northern Ireland in the United Kingdom’s internal market”.

Johnson said that if he concluded the Irish Sea trade checks were not working in the interests of the UK he would invoke article 16, which allows either London or Brussels to temporarily suspend the protocol, according to the BBC. The broadcaster has issued clips from the programme, which goes out on Tuesday night at 9pm.

The BBC will later on Tuesday release results of an opinion poll it has commissioned on both sides of the Irish border on whether the Brexit protocol should be scrapped.

Invoking article 16 would be hugely confrontational and relations with the EU have to yet to recover after an official in Brussels threatened the move in January in relation to vaccine supplies.

Officials in London and Brussels are engaged in intense technical talks to smooth the application of the protocol, which has been opposed by unionists and contributed to loyalist rioting at Easter.

The Irish taoiseach, Micheál Martin, told Spotlight said it was overly dramatic for anyone to claim the protocol was tearing the UK apart.

He said there appeared to be some signs that unionists, who are campaigning to have the protocol scrapped, would try to make the protocol work.

Both Martin and Johnson were also asked about the prospect of a referendum on a united Ireland.

Johnson declared there would be no such border poll for a “very, very long time to come” while Martin also denounced the prospect of a referendum in the near future, describing it as “explosive and divisive”.

Johnson said he would prefer people within the UK to think collectively about what they can do together, rather than concentrating on how they can split themselves apart, the BBC reported.

A referendum is provided for under the Good Friday agreement, with UK law enabling a vote in the Northern Ireland Act 1988.

There would also at the same time be a referendum south of the border on a united Ireland were this order to be given by the British government. Northern Ireland