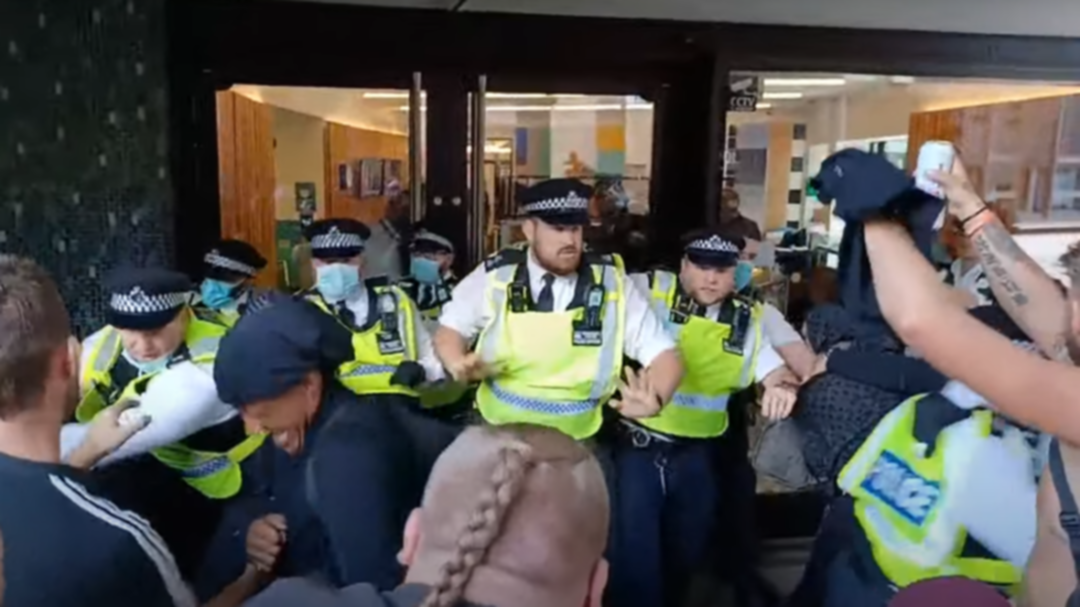 footage of BBC Television Centre in Shepherds Bush, London
According to the Russian news website the RT, BBC studios at Television Centre in West London were targeted by an agitated group of protesters opposing the government’s Covid-19 plans. The crowd attempted to break into the building, causing clashes with police.

The dramatic confrontation at the entrance of the BBC studios was filmed by witnesses at the scene. The footage showed a dozen or so Metropolitan Police officers rushing to stop the demonstrators, who appeared intent on forcing their way in.

Tempers ran high as members of the protesting group then stood in a human chain in front of the police, telling fellow protesters to keep in line. The crowd, which quickly grew in numbers, started chanting, “Shame on you!”, but refrained from attempting to get inside again. A handful of children standing behind the crowd joined the chanting.

The chaotic standoff was also filmed by Resistance GB, a lockdown-sceptical group that was livestreaming the protest, and other citizen-journalists.

The Met said it was “aware of a group of demonstrators” outside the BBC studios in Wood Lane, White City.

“There have been no arrests, but officers are in attendance and will continue to monitor the situation,” a police spokesperson said.

The BBC said it would not comment on security issues. Livestream footage from the scene showed people inside the building placing tables next to some of the locked doors, which the protesters took as an attempt to barricade the entrances.

UK protest against vaccines for the children outside BBC studios. pic.twitter.com/ond4aa5TcA

The demonstrators are mistrustful of the government’s handling of the Covid-19 pandemic – specifically the introduction of vaccine passports and the vaccination of children. They believe the country’s leadership is in cahoots with pharmaceutical companies and media outlets to deceive the British public about both the disease and the vaccines.

The BBC was apparently singled out for being a public-funded broadcaster – which, in the protesters’ view, is acting in the interest of the government rather than the British people.