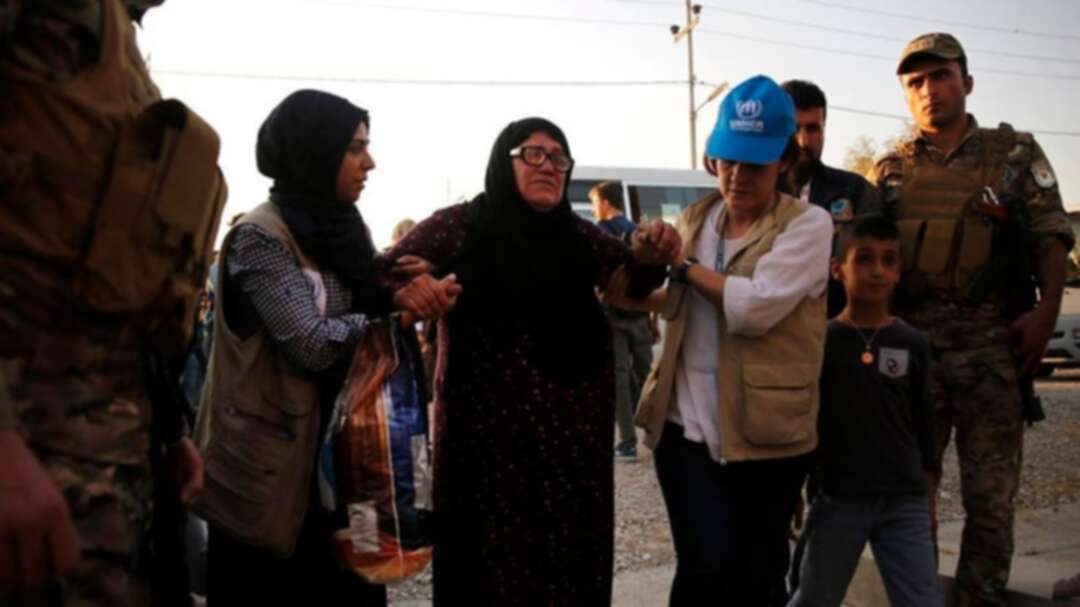 Humanitarian groups in northeastern Syria are scrambling to provide aid to hundreds of thousands of people as rapidly shifting battle lines make it increasingly difficult to reach them.

Nearly all foreign aid workers have been evacuated because of security concerns, and there are fears that local staff could face reprisals, either at the hands of Turkish-led forces pushing in from the north or Syrian troops fanning out across territory held by the embattled Kurds.

The front lines are being rapidly redrawn as more than 160,000 people flee the fighting, including many who were displaced by earlier battles in Syria’s eight-year civil war. The offensive has created a new refugee crisis in a region where some 1.6 million people already rely on humanitarian aid.

Before the offensive, a camp in the northern town of Ein Eissa held an estimated 12,000 displaced people, including around 1,000 wives and widows of ISIS fighters and their children. But rioting broke out as Turkish-led forces closed in over the weekend, leading to the escape of hundreds of ISIS supporters.

Sonia Khush, the Syria response director at Save the Children, which was operating in the camp, now says it is “nearly empty,” with most of the residents having fled further south and the IS supporters melting away. She said the aid group can no longer access its office in Ein Eissa, and that most of its local staff have themselves been displaced.

“We have to leave as the battle lines change,” she said.

Turkish troops and allied Syrian fighters invaded northern Syria a week ago after US President Donald Trump pulled back US troops who had partnered with Syrian Kurdish forces in the costly five-year war against ISIS. Turkey views the Kurdish fighters as terrorists because of their links to the decades-long insurgency in its southeast.

Abandoned by their US allies, the Kurds turned to Syrian President Bashar Assad and Russia for protection , and over the past two days Syrian and Russian forces have moved into several towns and villages as the US has pulled its remaining troops from the region.

So far, most of the displacement has been within northern Syria, but hundreds of refugees have crossed into Iraq in the past week, mostly through unofficial border points. On Wednesday, a first group of 890 people were bused to a camp in Bardarash, in northern Iraq’s semi-autonomous Kurdish region, which up until two years ago housed displaced people from the Iraqi city of Mosul.

“Where can go except here?” said Omar Boobe Hose, a refugee from the northern Syrian town of Ras al-Ayn, which has seen heavy fighting. “We can’t go to Turkey, because they are our enemy, and the other side is also our enemy, the Syrian (government) side. Where can we go? We have only here. There are no other places for Kurds.”

Doctors Without Borders, which operates in war zones around the globe and is known by its French acronym MSF, said Tuesday it had decided to suspend most of its activities and evacuate all its international staff from northeastern Syria.

“The highly unpredictable and fast-changing situation at present has made it impossible for MSF to negotiate safe access to deliver healthcare and provide humanitarian assistance to people in distress,” it said in a statement. “Given the numerous groups fighting on different sides of the conflict, MSF can no longer guarantee the safety of our Syrian and international staff.”

The International Rescue Committee also said it has suspended its health operations in the northeast because of “hostilities and uncertainty.”

It said an apparent airstrike hit a “trauma stabilization point” run by a local organization and that two of that group’s ambulances were damaged despite being clearly marked. It said the local group’s ambulances get fired upon every time they approach Ras al-Ayn, preventing them from reaching the town.

“Many hospitals have had to close and those that remain open are overwhelmed with casualties,” the IRC said. At least 42 people have been killed, including three children, since hostilities began Oct. 9, and another 123 people have been wounded, it said.

In Hassakeh, one of the main cities in the northeast, schools are being transformed into shelters, and some residents are opening their homes to displaced people. The city’s main water station was damaged in the fighting, and the International Committee of the Red Cross and other groups are working to maintain supplies for hundreds of thousands of people.

A woman from Ein Eissa said she fled with her family after an explosion near their home made her children cry.

“My husband and I took our kids, left the house and walked for hours,” she told the ICRC, saying the journey took two days because they couldn’t afford to rent a car. “Now we are staying in this school, where we feel a bit safer. But we brought no food, no water, no mattresses.”

Karl Schembri, a spokesman for the Norwegian Refugee Council, said the escalating violence makes it difficult to deliver aid to the hundreds of thousands of people depending on it.

“It has become unsafe for humanitarian workers to carry out much of their daily work and has made several displacement camps outside of the reach of aid agencies,” he said. The warring parties “need to guarantee that aid workers and civilians will not be targeted.”

Save the Children and other aid agencies are still operating in areas farther from the front lines, including the al-Hol camp near the Iraqi border, where tens of thousands of IS family members are being held. But as Syrian government forces move in many of the biggest international aid providers will have to withdraw because they are not registered in Damascus.

“There will be a huge impact on where we’re able to access in the northeast,” Khush said. “As we leave areas and government-registered agencies come in there’s always a gap in services in the transition period.”